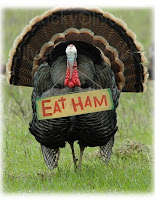 The folks at People for the Ethical Treatment of Animals, otherwise known as PETA, are back again trying to take the joy out of Thanksgiving and by that I mean trying to convince people that eating turkey is not only bad for you, but a gross violation of turkey rights.

They have offered their “Top Ten Reasons Not to Eat Turkeys” among which is the claim that turkeys “are smart animals with personality and character”, but this does not explain why not one single turkey has ever written a sonnet, composed an opera, or been elected to Congress—despite the fact that many of its members are frequently referred to as turkeys.

PETA goes on to claim that “turkey flesh is brimming with fat” and that unidentified “experts are warning that a virulent new strain of bird flu could spread to human beings and kill millions of Americans.” That’s right, we will either put on weight on Thanksgiving Day or we will die.

This kind of scare campaign is precisely why I founded The National Anxiety Center in 1990 as a clearinghouse for information about this and the countless other scare campaigns with which Americans are assailed on a daily basis.

The worst part of these campaigns is the way they too often become the law of the land. For example, there is a growing body of scientific evidence that points to the fact that we are into a global cooling cycle, but that is not likely to keep the Obama administration from trying to impose cap-and-trade restrictions on carbon dioxide and other greenhouse gas emissions. The costs of such restrictions would finish off what’s left of our tattered economy.

PETA is utterly shameless in its quest to get Americans to give up eating meat, using or wearing anything made of leather, wearing fur of any kind, drinking milk, eating cheese or eggs, hunting, fishing, owning pets, going to the circus or rodeo, and generally enjoying life for any reason.

Meanwhile, according to government documents, PETA employees have killed more than 19,200 dogs, cats, puppies, and kittens since 1998. The Center for Consumer Freedom keeps a close eye on PETA for the rest of us and what they reveal is, well, very revealing.

PETA is against all forms of medical research that requires the use of test animals even if it will find a cure for AIDS, cancer or any other disease or condition.

PETA has given tens of thousands of dollars to convicted arsonists and other violent criminals, some of whom the FBI identifies as “domestic terrorists.” These include the North American Earth Liberation Front.

PETA regularly targets children with their anti-milk and anti-meat propaganda. One piece of PETA literature tells them “Your Mommy Kills Animals!”

This is the kind of shameless and vile behavior that PETA engages in all the time.

It is, however, just one part of a far greater mosaic of “warnings” being slapped on everything we eat or use (a) to avoid litigation and (b) to influence our purchasing decisions. Do we really need caloric information when we visit a restaurant? Must we be forced to forego smoking by the imposition of appalling high taxes which go to state governments that either wastes the money or gives it to someone else?

Isn’t anyone angry about having to pay for an ethanol additive to every gallon of gasoline when it reduces its mileage while increasing not only its price, but the price of everything in the local supermarket by driving up the cost of corn and soybeans that are fed to the livestock whose meat we enjoy?

When the family gathers around the dinner table on Thanksgiving Day, whether the main course is turkey or a ham, give a thought to the many farmers and ranchers who have produced such an abundance of safe, delicious food.
Posted by Alan Caruba at 2:25 PM