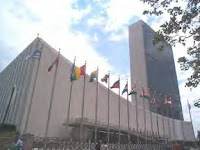 On Monday, November 24, the United Nations will commemorate its annual “International Day of Solidarity with the Palestinian People”, a hate-filled day that ignores its own role in the establishment of Israel.

An international institution that trumpets its Universal Declaration of Human Rights while openly seeking the destruction of the population of one of its member nations is so inherently debased that it should cease to exist.

The notion that the United States of America should continue to participate in the UN on the grounds that it is the only forum or means to resolve conflicts is absurd.

Monday’s observance marks November 29, 1947, the day that the United Nations voted to establish a Jewish and an Arab state in what was formerly the Palestinian Mandate whose administration had been ceded to Great Britain following the end of World War One.

The State of Israel was not created out of “Palestinian” lands. It was part of the Ottoman Empire that had ruled much of the Middle East for four hundred years and which, at the Versailles conference following the end of WWI, was divided into nations conjured up by England and France. Among the newly designated nations were Jordan, Syria, Lebanon, and Iraq.

There were no “Palestinian” people claiming a land called Palestine. Most of the Arabs regarded themselves as living in the southern portion of Syria.

The 1947 UN partition plan mandated the creation of two states on the remaining twenty percent of the Palestine Mandate. There was to be the State of Israel for the Jews and a new state for the Arabs.

What happened, however, was that the Arabs rejected a state of their own and launched a genocidal war against Israel. The war was the primary cause of the Arab refugee problem that exists today because none of the Arab nations in the region would accept the refugees and the UN facilitated their permanent status and continues to do so today.

There were, however, Jewish refugees. Between 1949 and 1954, an estimated 800,000 Jews were forced to flee the Arab and Muslims lands where they had lived for hundreds of years. In addition, many European Jews who had survived the Nazi Holocaust migrated to Israel. Later they would be followed by the persecuted Jews of Russia and other lands.

On Monday afternoon, the UN General Assembly will convene to discuss the “Question of Palestine” and if this is redolent of the Nazi “Final Solution” the comparison is accurate. The General Assembly is scheduled to adopt six resolutions condemning only Israel for violations of human rights. This will bring the total thus far this year to twenty such resolutions as opposed to four resolutions critical of any of the remaining 191 UN member nations.

Israel is not “occupying” land that belongs to a Palestinian state because no such state exists. It has occupied land won repeatedly in combat for its very existence. In recent years it ceded the Gaza strip to the Palestinian Liberation Authority, Fatah, but the result has been that Hamas drove Fatah from Gaza at gunpoint and now uses it to launch rockets against Israel on a daily basis. The West Bank, by any international standard, is a legitimate part of Israel.

The Arabs who did not flee Israel in 1947 were the lucky ones. They were able to remain in the only functioning, true democracy in the Middle East and today their children and grandchildren number more than a million Israel citizens, some of whom serve in the Israeli Knesset or parliament, on the Israeli Supreme Court benches, and as tenured professors in Israeli colleges and universities.

The United Nations continues to promulgate the most offensive anti-Semitism found anywhere in the world and Monday’s observance is just one aspect of it. Its “Durban II” conference on racism to be held in Geneva in April 2009 will be a repeat of the hateful first conference that was boycotted by several nations, including the United States. It should be condemned and avoided by all nations that take the professed UN Human Rights declaration at its word.

Those attending Monday’s International Day of Solidarity with the Palestinian People should be hosed down and driven from the chambers where it is held. The General Assembly should be seen for what it is, a place of shame, duplicity, and genocidal hatred in which no civilized nation should take its seat.
Posted by Alan Caruba at 11:09 AM

Couldn't have said it any better. Nicely done!