Government is Bad for Business 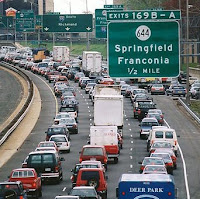 Why would the leaders of U.S. auto companies, two of whom are facing bankruptcy, gather around the President as he signed legislation requiring higher mileage per gallon when surely each knew that there is a finite amount of energy to be secured from a single gallon of gasoline?

They knew, too, they would have to build smaller, lighter, deadlier cars for anyone driving or who is a passenger in them; if, indeed, anyone will want to buy them or will be able to afford to buy them because their cost will increase with this new useless, senseless government mandate.

To meet a 35.5-mile-per-gallon standard by 2016 they might as well make cars out of papier-mâché. The new standards are yet another environmental delusion that the laws of thermodynamics can be replaced by ideology. Approximately 40,000 Americans die on the highways every year. Watch that number increase as the new standards kick in.

You and every other American is being taken for a fool because those who conjure up the stupidity these standards represent know you were never taught enough in school to understand what a fraud is being perpetrated against you.

This is why they can get away with airy references to “green jobs”, “clean energy”, and the greatest absurdity, an “energy independent” America that currently is forced to import much of its energy because U.S.-based natural resources have been put off-limits by the U.S. government.

Over the course of my long career as a public relations counselor, one lesson in particular has been learned. In general, people who run businesses run scared. When under attack their first instinct is to lay low and their next instinct is make any changes foisted upon them, even if they are based on bad science or lack common sense.

There’s a reason why you see television ads talking about the need for “all forms” of energy. They are the way energy providers are attempting to stem the tide of anti-energy rhetoric pouring out of the White House and Congress, while educating the public to the reality of how and where the energy they use is actually produced.

No coal? Half the electricity we use is generated by coal. No oil? All the gasoline is refined from oil, along with all the plastics we use. No natural gas? It heats millions of homes. Nuclear? It is good for twenty percent of our electricity.

Usually businesses and agricultural interests band together in trade associations to fight against injurious legislation. Washington, D.C. is home to a legion of government relations executives and agencies whose job is to spot trouble early and to convince legislators to avoid signing onto bad legislation or to modify it before it becomes the law. Without them, Americans would be suffering even more due to the idiotic legislation that is generated daily in Congress.

While the natural conflict of competition is the air corporate executives breathe, any conflict involving the U.S. government is necessarily buffered by lawyers, government relations specialists, and public relations professionals whose job it is to present the side of the argument the mainstream media generally ignores or distorts.

Corporate executives are not cowards. They do battle every day to increase their company’s profit margin, to protect its reputation among investors and with financial institutions, and to fund research and innovation. They also work hard to hire the best people and to keep them motivated and happy. That’s what bonuses are about and countless other programs corporations provide their employees. It’s good for business!

Congress, whenever it wants to intimidate some element of the business community, will drag them to Washington and then grill them mercilessly for the purpose of making them look evil. It is always a charade. Behind closed doors these same politicians can be found imploring the same corporations to give them campaign money.

In these times corporations have much to fear. Americans have elected a President who regards business and industry as the exploitation of workers, forgetting that they benefit employees, vendors, investors, pension funds, healthcare programs, and of course consumers.

Obama distrusts hedge funds and others who have made loans to businesses. He feels empowered to order the resignation of executives, alter the composition of corporate boards, and abrogate fundamental contract law. This is a man who has never so much as run a local Dairy Queen franchise!

It is useful to remember that virtually all of the recessions and the Great Depression were brought about, not by corporations and small businesses, but by government interference, usually involving exports and imports, but also by giving support to unions that, as often as not, saddled businesses with demands that slowed production and drained profits needed for growth.
It was not the financial community that came up with the notion of giving sub-prime mortgage loans to people who would, under normal banking practices, not qualify. That was a government idea. The fact that Fannie Mae and Freddie Mac ended up owning half of all the mortgages was a government idea.

Bailouts to banks, insurance companies, and auto companies were government ideas, but not constitutional ones. So far, the evidence suggests they were bad ideas.

Capitalism is a high risk venture. That’s what it’s supposed to be. Most start-up companies fail fairly quickly, but some grow and prosper. They expand and hire more people.

By contrast, all of us would benefit from a smaller, less intrusive government.

When corporations must deal with the government they are understandable wary and sometimes even fearful. They have reason to be.
Posted by Alan Caruba at 12:42 PM

Russia says “nyet to binding emissions targets”. Japan “goes cold on emissions targets” and the U.S. is talking about imposing trade restrictions with countries that don’t climb on board this climate claptrap.

“Jim Prentice, the (Canadian) Minister of the Environment, yesterday warned U. S. lawmakers to drop proposed trade sanctions on imports from countries with higher levels of greenhouse gas emissions, saying the measure would be a "prescription for disaster" for the global economy.” He went on to say that "Trade protectionism in the name of environmental protection would be a prescription for disaster for both the global economy and the global environment".

In short, this will trigger a trade war, much as the Smoot Hawley Tariff Act did under the Hoover administration, which turned a minor recession (that is what the stock market crash actually caused) into a serious recession and the beginnings of the Great Depression by sending unemployment up to 15%. And now the patterns of interference that we know absolutely are disastrous are being repeated. Smoot Hawley Tariff Act, the National Recovery Act and The Wagner Act were disastrous and yet they are repeating all the failures of past interference.

And this is being done by someone who has never done anything in business, successful or otherwise. At least FDR had some business experience….unfortunately they were all failures; just like his New Deal which drove the economy into a deep depression. Is that next? Why should we think otherwise?

Here is an interesting article by Larry Elder that everyone may find and historically informative and thought provoking within the context of your article.

The points he makes about road building reminded me of the book, Wealth and Poverty of Nations, which covers a host of issues, but it also outlines how the roads were built in France versus how they were built in England and the results of each.