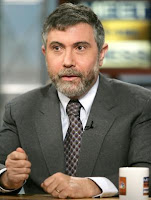 I know you’re thinking the title refers to Al Gore, but no, it belongs to Paul Krugman, an economist best known as a New York Times columnist, and winner in 2008 of the Nobel Memorial Prize in Economic Science. He is widely regarded as an expert in international economics and has very impressive curriculum vitae. By all the standards of our times, the man is a genius.

Anyone who has worked for an institution of higher learning as I once did soon loses his awe of PhDs. Their expertise is usually very narrow. The intellectual hot house which they share also includes immense pressure to demonstrate through research and publication that they are productive. There is a herd mentality and some vicious politics that goes on as well.

Krugman may know about economics, otherwise known as the “dismal science” because I suspect the capacity to be very wrong is equal to or greater than the chance of getting things right. Most certainly, his May 15 column, based on a trip to China demonstrated he knows nothing about meteorology, climatology, the science of the Earth’s atmosphere.

The Nobel Prize winner demonstrated what a moron he is when he strayed into the usual discredited blather associated with “global warming.” He spouts the nonsense about greenhouse gas emissions like some Red Guard reading from Chairman Mao’s Little Red Book.

“The scientific consensus on prospect for global warming,” wrote Klugman, “has become much more pessimistic over the last few years.” Firstly, the Greens have been predicting global warming since the 1980s, always concluding it was due to arrive ten, fifteen, twenty or fifty years from now. This is usually a good indicator of how flawed and false such predictions actually are.

Second, there is no such thing as a scientific “consensus” about global warming, unless you include the growing consensus that it is a huge scam designed to further a hidden agenda to destroy the economies of industrialized nations.

In March I attended the 2nd annual Climate Change Conference sponsored by The Heartland Institute. It was wall-to-wall seminars by climatologists and others demonstrating why carbon dioxide in particular plays no role whatever in determining the Earth’s climate trends and never did.

But for Klugman, like Al Gore, facts are of no value when writing about global warming. “Indeed, the latest projects from reputable climate scientists border on the apocalyptic. Why? Because the rate at which greenhouse gas emissions are rising is matching or exceeding the worst-case scenarios.”

Wrong, wrong, and wrong. Since carbon dioxide, a gas as vital as oxygen to all life on earth, plays no role in climate change, this assertion is just a regurgitation of Al Gore’s boldfaced lies. As to worst-case scenarios, that is the stock-in-trade of the Greens who conjured up the global warming hoax. It is based entirely on flawed and deceptive computer models.

The Earth has been cooling for the past ten years and, given the low activity of the Sun, the primary determinant of the Earth’s climate and temperature, solar scientists and others are predicting we could be on the cusp of a new little ice age or worse---a full-scale ice age that will render civilization’s short rise moot as nations find themselves buried under miles of ice for the next 100,000 years until the next interglacial period. It is, quite simply, colder everywhere.

Krugman’s main criticism of China, where he had visited prior to writing his column, was that “In January, China announced that it plans to continue its reliance on coal as its main energy source and that to feed its economic growth it will increase coal production 30 percent by 2015.” Good for China! I wish that the United States would permit, nay encourage, coal-fired plants to provide the electricity we will need by 2015 and beyond.

The opposite, however, is happening in the United States which has elected a President who’s on record saying he’d prefer to “bankrupt” any company that dared to build a coal-fired plant. Meanwhile, coal is the source of just over 50 percent of all the electricity we currently use!

If the U.S. continues to refuse to permit more coal-fired plants and continues to delay the building of more nuclear plants, we will not have the energy the economy needs to grow and Americans will begin to experience blackouts and brownouts like the banana republic we shall surely become.

Krugman was annoyed that the Chinese, more than a billion of them, seem to believe they have as much right to a lifestyle similar to ours, most of which was built on the availability of cheap energy and remains dependent on its affordability. If Congress passes the insane “cap and trade” emissions legislation, it will crash the nation’s economy. And they know it!

“The burden should fall,” wrote Krugman, “on those foreign consumers instead, that shoppers who buy Chinese products should pay a ‘carbon tariff’ that reflects the emissions associated with these goods’ production.” So, instead of benefiting from affordable Chinese exports, Americans should pay more for something—global warming—that is not happening and punish China and themselves in the process.

It just gets worse from that point on as Krugman writes that, “Sooner than most people think, countries that refuse to limit their greenhouse gas emissions will face sanctions, probably in the form of taxes on their exports.”

Great! That’s just what we need with China, a trade war!

If this is the best a Nobel Prize winning economist has to offer then the process of destroying our economy is already under way. Lesser mortals will instantly identify his remedies as idiotic.
Posted by Alan Caruba at 12:42 PM

How anyone can be a "liberal economist" as Krugman is, is beyond me. He's a huge believer in big government and central planning and not so much on the free-markets, or freedom in general

Even the term, "Liberal Economist" is an oxymoron with the one wearing that label the "moron" part of the term, Paul Krugman.

In an article entitled “Why Economists Failed to Predict the Financial Crisis”, it clearly outlines how badly economists fair as “prophets” regarding future events that will impact “profits”.

Professor Franklin Allen is quoted in this article as saying that economists used mathematical “models” that proved to be failures. He goes on to say that “They simply didn’t believe the banks were important”.

If they perform this badly in an area in which they should be reasonable expert; why should we believe anything an economist says in an area that has so many unknowns and is infinitely more complex than economics, such as climate?

And when you find out that their predictions were based on computer models....it boggles the mind. Computer models give out what the programmers want. Just like a Game Boy. Add some ideology or other into the equation and you get “garbage in garbage out”.

I have been following this issue and collecting articles for years dealing with Anthropogenic Climate Change, and it was obvious from very early on (that is, if all you were concerned about were the facts) that this had nothing to do with the environment and everything to do with global governance and socialism, which has adopted environmentalism as its last bastion, and doing very well at it I might add.

If someone with such limited access to information can easily see what is going on, one has to ask; why can't people with far more access see it? They can...they just don't care about the facts because they have an agenda, and facts that stand in the way must be ignored or dismissed.

As for computer models; you may wish to visit my blog at this address to view an outline of value of computer modeling by Mr. Roy Tucker.
http://paradigmsanddemographics.blogspot.com/2009/05/scientific-computer-modeling-method-101.html

Very interesting post and dead on as far as I can see.

Rich Kozlaovich is also dead on.

When history writes this chapter, there will be NUMEROUS groups/people to blame for the fall of the U.S. and virtually all of them will be from the left side of things and everyone of them will have that very same 'agenda'.

Welcome to the discussion Tazzerman!

Rich is mostly right about a lot of things.

"In March I attended the 2nd annual Climate Change Conference sponsored by The Heartland Institute. It was wall-to-wall seminars by climatologists and others demonstrating why carbon dioxide in particular plays no role whatever in determining the Earth’s climate trends and never did."

Really? Wall-to-wall? Cause the
program for their next conference doesn't seem to include a single climatologist, that I can see. Half of the speakers are just known climate skeptics — quite a few on oil company payroll — with no scientific background at all. The rest are scientists from loosely related fields. One guy's title in the program is just "scientist!"

Now that you're done. Get in line with the rest of the morons who wouldn't know the truth or tell it under any circumstances.

Anthony Watts is not a climatologist — you just doctored the lists to make that up.

Watts has every right to be regarded as a climatologist given his research into the placement of weather stations around the nations that revealed why so many provide flawed information. If his colleagues regard him as such, you have little or no qualification to dispute it.

But your objective, like all Greens, is to deride and derail the truth coming out of these conferences and from any other source.

There is NO global warming such as Al Gore describes and YOU know it.

I have what I think is interesting point worth considering.

When that weather girl from the Weather Channel demanded that all weathermen or women as it may be, be decertified if they didn't agree that CO2 was causing a global warming catastrophe...not one greenie objected that she was “just a weather girl”.

When she appeared on Larry Wolf’s show debating, I believe it was Dr. Lindzen, who is probably the world's foremost expert on climate; not one warming alarmist jumped up to say that she wasn't qualified to be there because she was just a “weather girl”.

When surveyed; most weathermen didn’t subscribe to the theories promoted by the alarmists. Why? Because they know that climate is variable and very difficult predictable to the end of the week with any real amount of accuracy.

Besides; Al Gore isn’t anything and has no expertise or accomplishments regarding climate work at all; should his movie be ignored? Jim Hansen has been accused of “mistakes” that call his integrity into question, shouldn’t he be ignored also? As for the Hockey Stick Graph fakers…..well…..do we really need to go there?

Hi to everybody, this is kishore. I want to share details of Nobel Prize. For the information on Nobel Prize history, prize money, winners by year, winners by category, winning countries list, list of Noble prize winners, list of countries, winners photos and etc details are available on “Altiusdirectory.com”.