The War on Our Southern Border 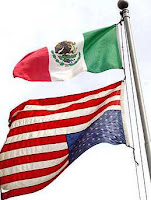 Among the latest news out of Mexico was the discovery of four U.S. citizens found in a van, strangled, beaten and stabbed in the border city of Tijuana. The victims, ages 19 to 21, were two men and two women from San Diego and Chula Vista areas.

In 2008, 6,292 Mexicans were killed in the drug wars between the drug cartels. In the first eight weeks of 2009, there were already a thousand casualties, some of them beheaded. By way of comparison, in six years of war in Iraq, this exceeds U.S. losses by more than three thousand.

In mid-March, however, the Speaker of the House of Representatives, Nancy Pelosi, third in the line of succession to lead the nation, told a crowd of legal and illegal Hispanics that enforcement of federal or even local laws regarding immigration is “un-American.” She called the illegal aliens in the audience, “very, very patriotic.”

No, Madame Speaker, the patriotic, indeed the constitutionally responsible thing to do is to enforce the laws of the nation. You even took an oath of office to do so.

It is an open secret in Washington, D.C., that Obama and his fellow Democrat travelers in Congress want to push through an amnesty in order to increase the number of voters likely to support Democrats in coming elections. Congress has a short memory and no doubt has conveniently forgotten the firestorm of protest that erupted when the Bush administration attempted the same thing.

President Obama’s proposed budget cancels plans to extend the border fence along the U.S.-Mexican border beyond the 670 miles already completed or planned. That leaves 1,277 miles open. In addition, the budget would end payments to states and communities to cover the cost of jailing illegal immigrants.

Sooner or later, some innocent American bystanders in downtown Tucson or any other American city are going to get caught in a hail of bullets as Mexican narco gangs exchange fire in a territorial dispute. Then Americans will demand action. You may recall that was the feeling right after 9/11 in 2001.

When I say “territorial dispute” I am referring to the network of American cities in which these gangs are currently operating. In April 2008, the Justice Department reported that Mexican drug cartels represent “the largest threat to both citizens and law enforcement agencies in this country and now have gang members in nearly 200 U.S. cities.”

Obama’s response to this was a promise to reduce gun sales that end up across the border and I believe him because we are already witnessing efforts to take away everyone’s guns. While calling for tougher border security, Obama so far is doing nothing beyond the management of a U.S.-Mexico agreement forged during the Bush administration.

Meanwhile, his Secretary of State, Hillary Clinton, is saying stupid things to blame America for the chaos of Mexico, claiming that American “is at least as responsible as Mexico for the violent drug wars…” No, we are not responsible for Mexico’s endemic corruption and its failure to crack down on the drug cartels many years ago.

Forgive me if I have little confidence in any real action being taken by Obama’s new director of Homeland Security, Janet Napolitano. When she was Governor of Arizona, she called out the National Guard to back up the Border Patrol, but essentially had them man desks. It was a serious waste of man power by all accounts. Currently she is calling for more motion sensors and aerial surveillance to spot those entering the nation illegally. That’s just a bad joke.

If the U.S. wants to avoid an all-out border war with the narco cartels, it needs to put up one very high fence along the 1,947 miles we share.

I have even less confidence in the Mexican government to deal with the narco gangs. It isn’t like they’re not trying. Meeting with George Bush in 2007, the president of Mexico, Felipe Calderon, asked for help to fight the gangs and to his credit, he has been making a serious effort, deploying thousands of police and military, but at a terrific cost to their lives. It is, in the very truest sense of the word, a war.

Mexico’s drug war is closing in on becoming Obama’s “Iraq”; a war not so much of choice as one that is integral to our national security.

This is not an exaggeration. In December, Four-Star general (ret.) Barry McCaffrey and former national drug czar said that Mexico is on the verge of becoming a narco-state. An Adjunct Professor of International Affairs at West Point, McCaffrey released a report that predicted Mexico will be in control of the narco gangs within a decade. “Chronic drug consumption in Mexico has doubled since 2002 as has cocaine use, while U.S. cocaine consumption has dropped by 70% in the past two decades. An estimated 5% of the Mexican population now consumes illegal drugs.”

Fully 90% of all U.S. cocaine use transits through Mexico and it is also a dominant source of methamphetamine production for the U.S. market.

All this is occurring while Speaker Pelosi is encouraging illegal immigration and denouncing enforcement of our laws to prevent it.

All this is occurring as the U.S. Immigration and Customs Enforcement (ICE) agency has released a report that border gangs were becoming increasingly ruthless, targeting rivals, along with federal, state and local police. Citing a dramatic rise in border violence over the past three years, it called it “an unprecedented surge.”

“Good fences make good neighbors” says the famous Robert Frost poem, Mending Wall, but a vastly increased border patrol and other steps are needed now to ensure the safety of Americans everywhere within the nation. It must be coupled with a renewed and vigorous effort to thwart the influx and to encourage as many of the estimated twelve million illegals living among us to return home.

Editor’s Note: One of the best websites for information about this problem is http://www.borderfirereport.net/. I recommend you bookmark and visit it to gain the insight and information necessary to demand congressional and White House action.
Posted by Alan Caruba at 6:06 PM

Since so many seem to think that a "war" on drugs is ineffective, expensive and not worth the time, I just thought an historical perspective might be interesting.

In 1949 when the Communists took over China they had the largest drug addicted population in the world per ratio. They eliminated their drug problem in five years. How did that happen?

Not very difficult to do, except here where we have too many gutless politicians who probably smoke dope or use coke. Go after the smokers and the suppliers with a vengence. It wouldn't take long, but Queen Nancy and Prince Hairless Reed would squawk because their supplies had suddenly dried up.