I Did Not Vote for Barack Obama 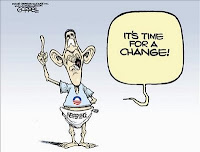 Whenever I am feeling a bit despondent and need to shake off the mood, I remind myself that I did not vote for Barack Hussein Obama.

The other day, feeling buyer’s remorse, I returned an item I had purchased and requested credit. It looked so good in the catalog, but turned out to be a bad idea. While those who voted for Obama are said to still regard him quite fondly, one suspects large numbers of them are experiencing the same feeling. I, however, did not vote for Barack Hussein Obama.

I did not vote for the feckless lad who sent Air Force One to buzz New York City, accompanied by a fighter jet, neglectful of the panic that would ensue among people who had a sudden frightening flashback to 9/11.

I did not vote for the man whose choices for his cabinet and advisors included tax cheats and others who have been an on-going succession of embarrassments. His science advisor went on record suggesting we shoot stuff into the atmosphere to stop global warming. His Environmental Advisor and EPA Director want to regulate carbon dioxide as “a pollutant” and threat to health. (We each exhale about six pounds of CO2 every day.)

I did not vote for the man whose Energy Secretary was gleeful over the prospect of $8-a-gallon gasoline prices or whose Homeland Security choice thinks entering the United States illegally is not a crime and returning veterans of the Iraq War are potential “extremists.”

I did not vote for the man whose constant use of a TelePrompter has become a running joke, accurately revealing that he is frequently unable to communicate well without one.

I did not vote for the man who, in the first three months of office, has requested three prime time televised press conferences. The ratings for each successive one dipped precipitously while he droned on providing “answers” that mostly blamed the previous administration for everything.

I did not vote for the man who has essentially thrown Poland, Tibet, and Israel under the bus while opening the door to Cuba. His globe-trotting rapidly became known as “The Apology Tour.” At one point, in Turkey, he announced that America was not “a Christian nation” when any reading of history reveals it was founded by Christians, all its Presidents have been Christians (until now?), and the vast bulk of the population are Christians.

I did not vote for the man who signed a “stimulus” bill with 8,570 “earmarks” after having campaigned against wasteful spending. He deemed it “imperfect.”

I did not vote for the man whose budget, by Congressional Budget Office calculations, would generate deficits averaging almost $1 trillion a year in red ink over 2010-2019; about $9.3 trillion in deficits over the next decade; more than four times the deficits of the Bush presidency.

I did not vote for the man who has taken control of Chrysler and General Motors while handing majority ownership of the former to the United Auto Workers union. At the same time, he denounced “hedge funds” who act as the fiduciaries for pensioners, teacher’s credit unions, personal retiree accounts, college endowments, etc. It is these investments which by law should receive first consideration that Obama dismisses.

I did not vote for the man who precipitously closed “Gitmo” but had no idea where to transfer its current detainees, nor did I vote for the man who released memos concerning “enhanced” interrogation techniques, depicting the nation as one that endorsed torture. On average, the detainees have gained twenty pounds during their stay and some of those previously released have gone back to their terrorist trade.

I did not vote for the man who thinks Afghanistan is the new “front” in the global war on terror, ignoring the defeat that caused the former Soviet Union to collapse.

I did not vote for the man whose Interior and Energy Secretaries have rescinded the move to open up our offshore continental shelf to exploration and extraction of what is estimated to be billions of barrels of oil and even greater volumes of natural gas while at the same time restricting the mining of new, vast deposits of coal.

I did not vote for the man who refuses to release his birth certificate and a list of other documents that would ordinarily be available for public perusal.

The list of reasons why I did not vote for Obama is growing daily and, despite his current personal popularity, is generating grave misgivings among the same public for his policies and the legislative agenda of the Democrat Party, much of which is an attack on talk radio, the Internet, and private enterprise.

My conclusion is that Obama, for all his academic credentials, is either very stupid or very anti-American, or both.
Posted by Alan Caruba at 12:55 PM

Yeah, he didn't need your vote to win.

And he doesn't need the Constitution to govern.

All he needed to win was the votes of morons like ron.

I didn't vote for him either. Just couldn't find it in my conscience to vote for someone who thinks the Constitution is a flawed document.

I thought ron was spelled Ron....

Alan I certainly don't have any remorse about Obama being president. I have sadness that people in the US are so easily fooled by a hoaxter and his buffoon (Joe Biden who everybody knew was a buffoon).
This hoaxter was a creation by the press. He(obama) is similar to a movie in the 70s with Robert Redford called "The Candidate".
My fear is that the American People who voted for this hoaxter have sown the wind and all of us (included those who didn't vote for him) will reap the whirlwind.
I am sad that I see nothing bright for the future for us who love America.

I didn't vote for either one of them.

For the first time in 40 years, I didn't vote for President.

I couldn't bring myself to vote for some corn-pone creep Republican who said,

"Democrats are SISSIES compared to me on climate change!"

This bogus candidate also said he "saw global warming with his own eyes in Alaska," which was enough to demonstrate what a moron he is