Are You Scared Yet? 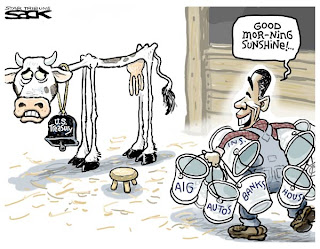 Listening to President Obama explain why the United States is now the largest stakeholder in General Motors and, one assumes Chrysler-Fiat, I was intrigued by how he can say two opposite things in the same speech.

Both auto companies could have been allowed to proceed toward bankruptcies months ago without any government intervention. A Rasmussen telephone survey reveals that 67% opposed this action. The U.S. Treasury has now been bled of $70 billion to allegedly keep GM from closing its doors, but a normal bankruptcy would have permitted it to restructure without an upper management and board of directors selected by the White House.

The outcome would have assured that GM was not forced to manufacture sub-compact cars that few Americans want even though GM’s European operations already do turn them out. That being the case, why not just import them from Europe in response to whatever sales might exist here? In the meantime, however, most of its brands that appeal to Americans will be shuttered.

If President Obama doesn’t want to run auto companies, he isn’t providing much evidence of it. He fired the former president of GM. The government is mandating that GM manufacture “green cars” that will find a scant market here.

The banking community is so scared of the White House that those who received TARP funds are eager to return them to the treasury.

I confess that every time I hear President Obama talk about “green jobs” I just want to throw something at the TV set. What exactly are these jobs? Are Americans clambering to spend thousands of dollars on solar panels for their homes? No. If there is no significant market for solar panels, how many people can be employed, especially after the government has squandered millions to teach unemployed auto workers to make and install them?

How big a market is there for wind turbines? They are hugely unpopular with their neighbors unless they are positioned in some desolate place far from human habitat. That means that power lines must be built for hundreds of miles to tap the slim returns they provide or use (the wind does not blow all the time, but the turbines utilize electricity because they must be kept turning or they break down.)

If nuclear or coal-fired plants could be built near the urban and suburban centers that really need them, they would provide both employment and the energy the nation requires.

Does that sound comparable to jobs that involve making things people really want, need and purchase? Does that describe construction jobs for new homes, new office buildings and other structures, new roads, new bridges and tunnels?

Aren’t oil and coal natural resources? If so, why has the government declared war on the mining and use of coal? Why has it refused to permit exploration and extraction of oil and natural gas from vast reserves in the nation’s interior or along its coastal shelf?

Other than solar or wind that currently provide one percent of all the energy we use daily, how much “renewable” energy do we need or want as opposed to more nuclear and coal-fired plants to meet current and future needs?

There used to be millions of green-collar jobs years ago. They were called farmers. As modern technology (highly dependent on gasoline and diesel fuel) made it possible for fewer farmers—little more than two percent of the population today—to produce enough crops to feed us, feed livestock, and to export to the tune of billions for the national economy, millions migrated to our nation’s cities and learned manufacturing and other skills. They became blue-collar and white-collar workers.

Those that have remained on our nation’s farms get very little credit for their work, must contend with endless regulations from the government’s Agriculture, Interior Departments, and Environmental agencies. Passing the family farm to their children faces obstacles as well.

The economic policies imposed by the White House and Congress are putting people out of work. The so-called “stimulus” bill will waste billions and employment will be temporary at best.

The Recession has just about run its course. They generally last about eighteen months, but the government is repeating every error of the FDR administration during the Great Depression and, in particular, plans to raise taxes at the worst possible time.

Are you scared yet? You ought to be.
Posted by Alan Caruba at 12:47 PM