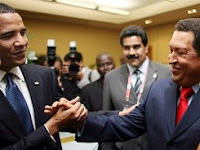 On June 16, a reception will be held to celebrate the launch of the Global Museum on Communism at the Romanian Ambassador’s residence in Washington, D.C. Other events have preceded the effort to ensure that the millions of victims of Communism in the last century are not forgotten.

I have no doubt that an invitation was extended to President Obama, though I doubt that he will be among the guests. After all, the man who has appointed some fifteen “czars” to run the affairs of his administration seems to have an affinity for direct rule over accountability to the Congress or the Constitution.

In an excellent, recently published book, “United in Hate”, by Jamie Glazov, the author notes in his preface that, “Throughout the twentieth century, the Western Left supported one totalitarian killing machine after another. Prominent intellectuals from George Bernard Shaw to Bertolt Brecht to Susan Sontag venerated mass murderers such as Lenin, Stalin, Mao, Castro, and Ho Chi Minh, habitually excusing their atrocities while blaming America and even the victims of the crimes.”

Glazov noted that, after 9/11 leftists like “Jimmy Carter, Noam Chromsky, Michael Moore, and Tom Hayden, once again reached out to bloodthirsty tyrants bent on human destruction.” Who can forget Sean Penn’s globetrotting to defend the likes of Saddam Hussein or Hugo Chavez? Inherent in the Leftist view of the world is the embrace of despots.

If you ask people how many have died from communism oppression they tend to have either no idea or a vague notion that it’s been a lot. “The Black Book of Communism: Crimes, Terror, Repression” is a chilling recounting of the toll that communism has taken.

Here are estimates of the numbers of victims:

These grim statistics include executions, intentional destruction of population by starvation, and deaths resulting from deportations, physical confinement, or through forced labor.

Leftists tend to find reasons to excuse or ignore these atrocities. A Pulitzer Prize winning journalist, Walter Durante of The New York Times during the rise of Stalin managed to overlook his deliberate starvation policy imposed on the Ukraine. Jane Fonda famously lent herself to the propaganda of the North Vietnamese during the U.S. war to defeat a communist takeover.

A lot of Americans, mostly the younger ones that have passed through our government schools, think that there are no more communist regimes in the world and do not make a connection between them and the repression of the people under their control even as fairly new dictators like Venezuela’s Chavez emerge.

Efforts to rescind restrictions on a communist dictatorship 90 miles from the U.S. border, Cuba, have been initiated by the Obama administration. The response to one of the worst Communist nations, North Korea, has been mostly temporizing and downplaying of the threat they represent to major allies.

It is understandable that the nation’s attention has been focused on the Middle East and the rise of the threat of Islamism, but Communism is still alive and a force in the world even as it tries to present a less threatening face to it. It is a deception.

Since October 1917, the Bolshevik Revolution has spawned the deadliest ideology in all of human history. In less than 100 years, Communism has claimed more than 100 million lives and it continues to enslave one-fifth of the world’s population.

Conservatives understand the threat. They oppose Barack Obama because his life has been filled with Leftists and his calls for the redistribution of wealth, his support for labor unions, his attacks on Wall Street and efforts to secure government control of the nation’s banking system, and to impose a nationalized healthcare system come right out of the Communist handbook for the control of our lives.

A memorial to commemorate the victims of Communism stands just two blocks from the U.S. Capitol building. A museum, much like the Holocaust Museum, is in the works. We must never cease to oppose Communism. We must not forget those who gave their lives in Korea and Vietnam during the Cold War to oppose its spread.

We must not allow our government to yield or fall to its siren call.

For more information about the Victims of Communism Memorial Foundation, go here:
http://www.victimsofcommunism,org.
Posted by Alan Caruba at 12:46 PM

How sad, but how true. And you know what really gets me? The fact that conservatives see obama's extremely questionable agenda, we see him sliding things through congress (with so far anyway, no or very little opposition because the rinos are reaching across the aisle and there's not enough real conservatives on capital hill) and doing everything "fast and now". We see these things as socialist, which is really one step from communism. Then we are painted as fear mongers, anti establishment, anti government , racist, biggoted, and just plain morons becuase "everyone knows there is no such thing as communism anymore!" We are feeling the noose tighten a little more every day. I really believe it is time for me to become a citizen so I can vote in the next elections. That is, if we are still allowed a vote by then.
God Bless you Mr. Caruba. Thank you

Sad to say, you might be better off retaining your current citizenship (I assume Canadian) than to risk becoming an American in a nation that Obama is dragging into a socialist dictatorship.

I"ve thought long and hard over the years. I wanted to honor my parent's wishes to remain a Canadian citizen, but I told my mom a couple of years ago that I am here to stay, been living here for 20 years this year-I was born and lived up there for 24. While she'd miss any dream of my coming back, she understands (I think!) I miss my family and friends "back home" but I do consider the US my home- for better or worse. Besides, Canada has been socialist leaning for years too :-( So..... Still thinking. Thank you Mr. Caruba!