Reasons to Distrust Your Government 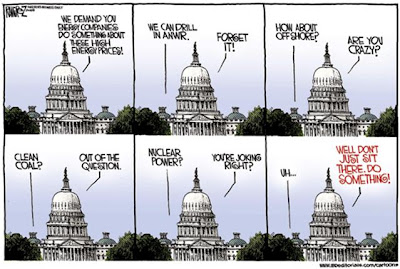 In the normal course of events, when voters no longer have confidence in the President, their Senators and their Representatives, they vote them out of office, but there are whole agencies of government that continue on no matter who is in office and, since their budgets and existence depend on the politics of whoever holds power, they bend to serve their policies.

A democracy is most in peril when citizens conclude they can no longer trust their government and there is no better example of that than a recent report, “Global Climate Change Impacts in the United States”, issued by the National Oceanic and Atmospheric Administration. It is sheer rubbish.

It is typical of the deliberate distortions and outright lies that have been put forth to an increasingly doubting public regarding “global warming.” It is part and parcel of the deceptions perpetrated for decades now by the United Nations Intergovernmental Panel on Climate Change, all of which feature tortured data of dubious quality and, since 1998, have ignored the Earth’s cooling trend.

The increasing reports from around the nation of “freaky” weather, of snow in June, and other anomalies are, in fact, a reflection of this cooling trend and it is likely to last at least thirty years or more.

John P. Holdren, Assistant to the President on Science and Technology, and a man who holds some of the most outlandish and baseless views on climate change, said “This new report integrates the most up-to-date scientific findings into a comprehensive picture of ongoing as well as expected future impacts of heat-trapping pollution on the climate experience of Americans, region by region and sector by sector.”

No it doesn’t. For one thing, the “heat-trapping pollution” to which he obliquely refers is mostly carbon dioxide, a gas vital to all life on Earth and a gas which, in the days when the dinosaurs roamed the Earth, could be found in concentrations five times or more higher than today. If CO2 was the great Earth destroyer that Holden, Gore, and others insist, there should be no Earth at all as we know it today.

To call CO2 “pollution” is to immediately invalidate the entire report, but to further insist, as the report does, that it is “primarily human-induced” is not just quite wrong, but a great big LIE. Human activity plays virtually no role whatever in the production of CO2.

This product of the interagency U.S. Global Change Research Program is a 190-page piece of loathsome propaganda that predicts more frequent heat waves, more flooding and waterborne diseases, rising water temperatures, more insect infestations and wildfires, and that old standby, rising sea levels with coastal flooding that will no doubt drown Manhattan and other coastal cities.

Hollywood does a better job with such fantasy than the minions of Washington, D.C.

Meteorologist Joe D’Aleo, the first Director of Meteorology at The Weather Channel and former chairman of the American Meteorological Society’s Committee on Weather Analysis and Forecasting, said of the NOAA report “This is not a work of science, but an embarrassing episode for the authors and NOAA.”

This report and the hours of effort that went into it is pure science fiction, predicting outcomes, as all such “global warming” does (now called “climate change”), fifty to a hundred years from now.

Global warming propagandists always focus on a distant and unknowable far horizon, safe in the knowledge that only a future generation will discover their lies. By then, the horrid “environmental” legislation they wish to impose on America will have destroyed its economy and ruined our lives.

It is no accident this report has arrived just in time for a debate on the “Cap-and-Trade” legislation that is nothing more than a huge TAX on all energy use and one that will increase the cost of all energy to everyone by thousands of dollars individually. It will drive industries dependent on large quantities of energy to foreign nations. It is a huge job-killer.

Duke Energy of North Carolina, based on the spurious science of global warming, has asked the regulators of that State for permission to raise electricity prices 12.6 percent. The requested price hike would cost North Carolina ratepayers $496 million. They should change their name to Enron. It’s not being used any more.

Utilities required to include a mix of solar and wind energy, the least efficient and most impractical producers of energy because of Renewable Energy Mandates will be forced to ask for similar increases. America is the Saudi Arabia of coal. It is the most affordable way of generating energy. More coal-fired and nuclear plants would ensure that rates would remain stable for many decades to come.

Naturally “Crazy Eyes” Nancy Pelosi, the Speaker of the House, was quick to weigh in on news of the NOAA report. “The impact of the climate crisis on the United states and around the world is becoming increasingly severe.” Nonsense! More lies from the Speaker.

The climate is always in a state of change and that change is determine primarily by the Sun, as well as other natural factures such as the oceans, volcanic activity, and the greatest meteorological mystery of all, why clouds behave the way clouds do.

The NOAA report has already been torn to shreds by many of the leading meteorologists and climatologists throughout the nation. It is pure scaremongering and it is intended to further an environmental agenda that is determined to deprive Americans of the energy sources we will need to power our way out of this government-induced Recession and meet the needs of an expanding population.

It is yet another Obama-driven “crisis” and Americans have good and grave reasons to reject the massive global warming deception, “Cap-and-Trade”, and all those seeking to drive us like lemmings over the cliff of an insolvent, bankrupt nation.
Posted by Alan Caruba at 12:33 PM

Alan could you publish this or post it I suppose. I posted it on both of my blogs.
http://mike630.vox.com/ and http://miketrani.com/blog/

read the call-in from the lady that wrote the letter then follow the link to the actual letter is the best I can do here.

Hi Mr. Caruba- Living in Florida, I depend on NOAA for hurricane and storm updates, but I have to say, they are really losing any respect that I had for them. God Bless, and thank you~

All may not be lost - perhaps true science 'as a candle in the dark' may be gaining strength.
On the 17th June, two days ago, an absolutely stunning report from The Space and Science Research Centre, by the Director, John Casey, issued a warning that America is unprepared for a new cold climate because of President Obama's climate change policies and stated that the coldest weather in 100 years is to strike by 2012 because of the slowdown of activity in the sun.
This is classified as an important warning to the American people and its leadership. The warnings and predictions are two years old but the MSM won't touch it.
The press release unfolds the true horror of what could possibly be a very cold and destructive era - and nobody in authority is listening or wants to listen.
I refer you all to the report on Canada Free Press

Piers Corbyn, an internationally respected meteorologist, has just gone on record saying, "World cooling has set in and it will stay colder for at least 100 years."

Worldwide, politicians are ignoring the science and putting their countrymen in jeopardy while, at the same time, burdening them with taxation based on the false global warming claims.

The AGWers covered themselves by flipping from Global Warming to Climate Change and then in a blink to Climate Chaos. Their next escape is now in hovering the wings. Having defaced so much of the countryside with impotent windmills, their drift is starting to become "Manmade pollutants are preventing the winds from blowing at their previous strength". Watch that out for explaining away the absence of wind-generated kilowatts.
Geoff Alder

I love the cartoon and will be using it next week. The price of energy is the beginning of wisdom.

"the principle— which is quite true in itself — that in the big lie there is always a certain force of credibility; because the broad masses of a nation are always more easily corrupted in the deeper strata of their emotional nature than consciously or voluntarily,"
Adolf Hitler.
In my opinion this global warming issue is a religion. These people that are so fanatical about "global hoax warming" are like cultists. We must stand up for our "mother Earth". This is a type of Neopaganism.
There is absolutely nothing that you can say to convince them otherwise. They are dogmatic over their religion. "Don't confuse them with the facts."
They want to believe this hoax or otherwise they might wake up one day and find that they have wasted their lives to a deception.
In my opinion, someone is manipulating this whole hoax and profiting from it. Follow the money trail... oops... I see Al Gore.. and Obama as his High Priest. Money may not be the only issue, it may be power or adulation.
"I mean in a way Obama’s standing above the country, above – above the world, he’s sort of God."-Evan Thomas

We have just added your latest post "Reasons to Distrust Your Government " to our Directory of Environment . You can check the inclusion of the post here . We are delighted to invite you to submit all your future posts to the directory for getting a huge base of visitors to your website and gaining a valuable backlink to your site.