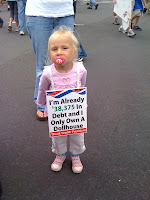 It is incomprehensible that the Democrats who control the House and the Senate adjourned without extending the Bush tax cuts. If they had extended them by even a year, businesses large and small across the nation would have been able to make plans for 2011.

The only thing we know for sure as Election Day approaches is that, absent an extension of the lowered rates on personal income, capital gains, dividends, and estate taxes, on January 1st everyone will see their taxes go UP!

Here’s how it works out:

Taxes will increase on marriage and family. The "marriage penalty" (narrower tax brackets for married couples) will return from the first dollar of income. The child tax credit will be cut in half from $1000 to $500 per child. The standard deduction will no longer be doubled for married couples as opposed to the single level. The dependent care and adoption tax credits will be cut.

The “death tax” on estates will return and it will punish those who want to pass their family business or farm to their children.

In a recent article in The Heartland Institute’s Budget & Tax News, Alyssa Carducci noted that “Nationally, the typical middle-income family, which has a medium income of $63,366, would see its federal income tax burden increase by $1,540 if the tax cuts expire, according to an analysis by the Tax Foundation.”

We have been informed that the recession is over, but it is not over. Not if you give any thought to the high unemployment rates, the number of defaulted mortgages by homeowners, and most other ways we calculate such things.

Phil Gramm, a former U.S. Senator from Texas and former professor of economics at Texas A&M University, wrote a commentary published in a recent edition of The Wall Street Journal. It was titled “Echoes of the Great Depression.” I have previously written about the fact that Democrats who have controlled Congress since 2006 have embraced the same bad policies that prolonged the 1930’s Great Depression for a decade.

“During the average recovery since World War II,” wrote Gramm, “gross domestic product (GDP) surpassed the pre-recession high five quarters after the recession began. It has never taken long than sever quarters. Yet, today, after 11 quarters, GDP is still below what it was in the fourth quarter of 2007.”

Graham noted that, if you look around the world, other nations have rebounded from the financial crisis that broke in October 2008, all-too-conveniently just before Americans went to the polls to vote.

“Today’s lagging growth and persistent high unemployment are reminiscent of the 1930s, perhaps because in no other period of American history has our government followed policies as similar to those of the Great Depression era,” wrote Gramm.

There is virtually no program or decision the Obama administration has made that has contributed to an improvement in the economy. TARP and other measures were initiated under Bush and much of it has been repaid. The Obama “stimulus” bills are generally regarded as a failure.

A very long list of White House and congressional decisions could be provided, but they all add up to taking more and more money from taxpayers at a time when infusing the economy with consumer purchasing is the single best way to get the economy going again.

I will make a prediction that, following the midterm elections, when the many defeated Democrats return to the so-called lame duck Congress, they will retaliate by passing Cap-and-Trade and a host of other legislation the vast majority of voters oppose. Obamacare was just a taste of their utter contempt and their takeover of one-sixth of the nation’s economy.

Their objective is not to save the economy or ease the burden on taxpayers. It is just the opposite. It is a demolition derby.

This current Democrat Congress (that I hope is the last one this century)reminds me of a mass murderer who keeps on killing despite the fact that the police are closing in on him and arrest is certain.

After all, the penalty is the same for one murder, or 100 murders.

@Fred: OOPS! I have corrected the spelling of Gramm's name. I must have been thinking of Graham Crackers, yum!

Thanks for sharing. Nice information. keep it up Demolition Service