Joe Biden is No Laughing Matter 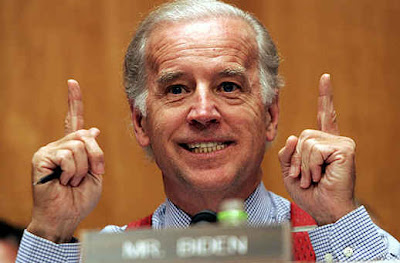 “The first two vice presidents were elected president outright, and twelve more veeps would end up, by hook or by crook, in the White House, running things. The vice presidency has supplied a third of our presidents. For that reason alone, it’s worth losing sleep over.”

That’s what Jeremy Lott wrote in his entertaining history of the nation’s vice presidents titled “The Warm Bucket Brigade.”

If you want to consider just how close we came to having a lunatic and charlatan of the first order, keep in mind that Al Gore was Bill Clinton’s vice president for two terms and was thankfully defeated when he ran for the office.

Dick Cheney, George W. Bush’s vice president, is frequently described as Darth Vader, but for Bush’s two terms, the former Secretary of Defense with a deep portfolio of elected and appointed positions can be credited with understanding the dangers in the real world and advising the president well following 9/11.

This brings us to Joe Biden, a longtime Senator from Delaware whose judgment is questionable at best, laughable at worst. And he is the proverbial one heartbeat away from the job of president.

The last time when had a vice president who was held out as a laughing stock was Dan Quayle, George H.W. Bush’s choice, but Bush remained loyal to him despite calls that he be dropped in both 1998 and 1992. Quayle was hardly the fool the media painted him but his gaffes didn’t help his place in history.

This brings us Joe Biden who is rapidly becoming a major embarrassment to President Obama and the rest of the nation.

Famous for talking at length while saying almost nothing useful, Biden’s gaffes are now a matter of record. His “This is a big fu*king deal” during the Obamacare signing ceremony on March 23 is now seen in the light of how this atrocious piece of legislation has literally screwed the entire nation.

During the over-hyped swine flu outbreak, Biden warned Americans to stay out of “confined places” such as airplanes, suggesting that taking the subway was a good alternative.

Nor could he remember the 800-number for the website that people could visit to track stimulus spending. He might well regret ever remembering it insofar as the latest news that millions were sent to dead people and convicted felons in prison. Beyond that, the stimulus bill has laid a big fat egg.

It was Biden who was touting a “Recovery Summer” that never occurred as unemployment rolls remained high around the nation.

To his credit, he accidentally spoke the truth when he told a gathering of the House Democratic caucus in February 2009, “If we do everything right, if we do it with absolute certainty, there’s still a 30% chance we’re going to get it wrong.” Turns out the odds were a lot higher.

His political judgment has made some Democrats wince. “Hillary Clinton is as qualified or more qualified than I am to be vice president of the United States of America. Quite frankly, it might have been a better pick than me.” Her qualifications included having been First Lady by virtue of being married to Bill, followed by a carpet-bagging election as a Senator from New York. Odds are she will jump off the good ship Obama well before his disastrous first and last term is over.

Reelected robotically by the good citizens of Delaware, Biden would likely have remained in the Senate presiding over its foreign affairs committee, but for reasons known only to Obama, he was raised to a position characterized by one of FDR’s many vice presidents, John Nance Garner, as “the worst damn fool mistake I ever made”, declaring the job not worth “a pitcher of warm piss.”

In his book Lott concludes that, “If we wanted to create an office to trade prestige for ambition—a drunk tank for the power mad—we’d probably concoct something like the modern vice presidency.”

If, by chance, Biden should ascend to the presidency to replace Obama, it is doubtful anyone will find much to laugh about.

The Obama/Biden campaign was more against Bush than against McCain. Biden wouldn't have that option.

Biden would have to somehow justify his support of the monetary policies which have been so harmful. And, IMO, defend himself with respect to the ever-worsening economy.

Add those factors to his "Gaffe-itis" and odds are he's gone.

Danged sure hope so, anyway.

Don't forget his tendencies to lie and plagiarize when convenient.
Curiously (probably not) most don't seem to care these days and some actually think it was a brilliant use of the system.

I have heard, and read many hoping for the demise of Hussein Obama, and I have to point out, IF that happens, we get Biden...

Not only is he a butt kissing libber and a Socialist, he is also a certified MORON...

You know, the folks under him are no better either...

Fred...if you could ONLY just say what's on your mind instead of just being so NICE to Joe Bite-me, complimenting him, et cetera. :-)