Is Obama Just a Moron? 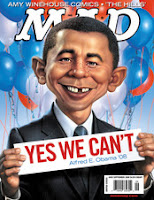 How many recall the eight years of George W. Bush’s two terms in office during which he was constantly derided as being too dumb to be president? He was deemed “a frat boy” and yet Bush had graduated from Yale University and went onto to secure a master’s degree from Harvard Business School. When his grades were compared to Sen. John Kerry during his campaign for reelection, it turned out he had higher scores.
We can’t compare Barack Obama’s grades to Bush or anyone else because they, along with his birth certificate, and indicators of his scholastic achievements have been hidden from public review.
This is not, however, a defense of Bush. This is about a question that millions of Americans are beginning to ask. Is Obama just a moron?

When I use the term, it should be noted that we have had presidents in the past who had impressive scholastic records, but who still turned out to be dumber than your average pea-picker and ridge-runner.

Woodrow Wilson took office after a distinguished career in academia and had been the governor of New Jersey. It was Wilson who embraced the income tax and who turned out to be astonishingly naïve about international affairs despite having helped the allies win World War One. Jimmy Carter, on paper, was no dummy. A graduate of the Naval Academy at Annapolis, he had been governor of Georgia, but as president he was a dismal failure.

In early 2009, I wrote a commentary, “Putting a Child in Charge”, suggesting that having a young president—he was 47 at the time—be in charge of the greatest economic and military power in the world might not be a good idea. I noted that Obama’s resume was unusually thin in terms of any real achievement. His main claim was that he had been a community organizer in Chicago. Politically he was best known as a state senator for voting “present” much of the time and he had barely spent any time in the U.S. Senate before beginning to run for president.

It’s not like he didn’t signal what he actually thought. “We can’t drive our SUVs and eat as much as we want and keep our homes on 72 degrees at all times…and then just expect that other countries are going to say OK.” Huh? When did we ever care what other nations thought about our driving, eating, or the setting on our thermostats?

And Michelle was scary, too. “Barack Obama will require you to work. He is going to demand that you shed your cynicism. That you put down your divisions. That you come out of your isolation, that you move out of your comfort zones. Barack will never allow you to go back to your lives as usual—uninvolved, uninformed.”

Not that far into his first twenty months in office, the independent Tea Party movement erupted all over the nation and it wasn’t because hundreds of thousands of Americans were uninvolved or uninformed. The problem was that a million of them had earlier journeyed to Washington, D.C. to protest against passage of the disastrous Obamacare “reforms” only to be dismissed by the White House as “wrong.”

Americans took notice of all the tax cheats and various loonies nominated to be in Obama’s cabinet, many having to withdraw from consideration, one who became Secretary of Treasury, and dozens who went on to become “czars” without any vetting from Congress.

So far, the guidance offered by his initial choices as economic advisers has driven up the deficit to historic highs and done nothing to reduce unemployment. So, as Michelle says, Obama will require you to work…just as soon as he figures out where real jobs come from.

The President just admitted that he was unaware there were no “shovel ready” projects for a huge infusion of government funding and yet he used that phrase over and over again while stumping for his failed “stimulus” program. Even the mayor of a small city could have told him that, but Obama had never run so much as a lemonade stand until being elected President.

At this point, Obama has spent more time playing golf in just under two years in office than Bush spent during his entire eight years. He does so mostly on Sundays and was noticeably missing from any church attendance until people began to think he was a Muslim.

As the midterms approached, key members of his administration have headed to the exit doors including his aforementioned economic advisors, a national security advisor, and his chief of staff. The man credited with getting him elected, David Axelrod, will quit soon to help shape his campaign for reelection if, that is, Democrats are stupid enough to nominate him again.

Famously, Americans early on realized that Obama could not deliver a speech without having Teleprompters and, when called upon to speak without them, became a mass of stuttering, sputtering, sentence-splitting incoherence.

If that wasn’t bad enough, Obama demonstrated an ability to insult whole nations while, at the same time, apologizing to the world for America’s exceptionalism and achievements.

He sent back a bust of Churchill to the British consulate and his gift to then Prime Minister Gordon Brown was a box of 25 DVDs, all in a format that would not work in the UK. He gave the Queen an iPod preloaded with 40 show tunes.

Since being elected he has insulted Wall Street, insurance companies, physicians, the president of France, Las Vegas, the Postal Service, Nancy Reagan, and lately the U.S. Chamber of Commerce!

Mostly, though, he has insulted the intelligence of millions of Americans, many of whom will be going to the polls on November 2nd to let him know they think he is a moron and among the worst, if not the worst, president to have ever held that office.

Wilson, FDR, LBJ, Obama - the four worst (and most evil) Presidents ever.

Obama is -- by FAR -- the most moronic, most unqualified and unaccomplished President ever.

That's "Gordon" Brown (British PM) not "Harold", Alan -- but it hardly matters since nobody over here liked him anyway.

@Merry: Damn, it is Gordon. Thanks for the correction. I seem to recall that the British held a two week celebration when he was defeated.

I've felt in the past that Carter was right up there as the worse ever. However, his and the others mentioned by other commentators pale in comparison with this bozo. At least Carter in his own assinine way loves his country.Misguided as he was, Carter and the others for that matter were not open Anti-American scum as this president is.

No, but he's obviously not very intelligent (Only a very dull mind could accept Marxism) and he seems to has acquired his college degrees by means of affirmative action; nor is he a leader; nor is he much of a man.

In high school a nerd like Obama would have been ignored by the smart kids, the cool kids, the jocks and even the special education kids.

The only circle of friends someone like Obama would have had in high school would be the low I.Q. haters and bisexuals.

Carter gets his own category -- the most impotent and most ineffectual President ever.

But, unlike the others I previously listed, Carter did not leave us with massively destructive structural game changers such as the "Progressive" movement, Social [in]Security, massive Federal bureaucracies, Medicare, Medicaid and ObamaCare.

Reagan was able to rather quickly reverse Carter's stupidity. Art Laffer -- who served under Reagan -- believes we can do the same with Obama's stupidity. I am less optimistic. But, I will keep on fighting.

@sbvor: I agree Carter was the most impotent which is why I categorized him as one of the worse along with the others. As I said though, inept as he was, I have always believed he loved this country, some thing I feel this incompetent boob does not do. A real leader and a horse’s ass. Guess which is which. Hint: 33 men are alive thanks to leadership.
The main problem I see is if we do in effect make a sweep of both houses, the electorate will have to stay alert this time. If we get complacent again as we always seem tot do, the hard core Marxists now in control will once again take advantage. We the people must never again ket our ideals be compromised by the Socialist anti-American left as led by this president!

The right POTUS, with the right Congress and Senate, can turn this nation, and ALL of the Obama screw-ups around in short order, but it MUST be a POTUS with BALLS and the will to lead America, and not to become a RINO and rape her...

As far as I am concerned, Nixon was as responsible for destroying this nation as any past president. Who created the EPA, which has basically destroyed our country's ability to mine or manufacture anything? Who came up with the concept of "earned income tax credits" which is no more than refunding taxes which were in fact never paid? Nixon was no more a fiscal conservative than the man in the moon. Granted, Nixon seemed to hate communism, but he is the one that gave political recognition to Red China, one of our mortal enemies at the time.

Tax credits are no more than shifting the burden of taxes from one group to another group, another form of welfare for special interest groups.

Every piece of legislation passed, whether local, state or federal requires government employees to administer it. Often, from my own personal experience, less tax money is received than the administration of said program costs the taxpayer.

Some might feel that giving away $10.00 to the resident of another country so the resident can buy $10.00 worth of goods from American companies (a Republican concept once) is a great idea, but I know engineering economics, and it is incredibly stupid.

Politicians can take that which works quite well, and fix it and fix it until it is so broken it can't ever work again.

We need no new legislation, but we do greatly need to de-legislate a huge number of existing laws that are destroying us economically.

And Obama is nothing other than a ventriloquist's dummy, reading what others wrote from a TelePrompter. Not a moron, but a dummy. Morons are far more intelligent.

Those who write what Obama reads are mortal enemies of the US of A.

I think most Americans put all their hopes and dreams for a better America in Obama, just as they did in Kennedy. But, after all, he was just another democRAT. I am sick of both the democRATs and republiCAN'TS. I am voting Libertarian or independent if no Lib running. READ THIS BOOK: HEALING OUR WORLD IN AN AGE OF AGGRESSION - I guarantee it will convert all of you out there. And if I hear another person say if they vote Lib or independent, they are thowing their vote away, I promise to throw up all over them!
Karen Mitchell