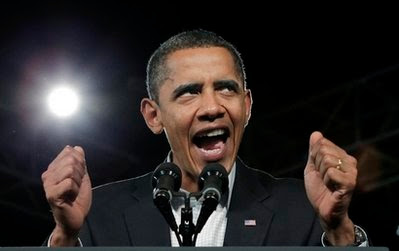 He is the 44th President and, while we have had incompetent Presidents in the past, we have never had one determined to destroy the nation. It has taken more than two years for most sentient Americans to grasp this extraordinary threat. He has not solved problems. He has exacerbated them.

Granted the financial crisis began in 2008 as President George W. Bush was finishing his second term, but President Obama—aside from blaming Bush for everything that has occurred on his watch—literally tripled the national debt with dubious and failed “stimulus” programs, plunging the nation into debt that rivals all others in our history.

President Obama had a lot of help in getting elected and will no doubt get it in his effort to secure a second term. The mainstream media has utterly debased itself, sounding more like the state monopolies of fascist nations.

On June 6, 2008, a reporter for the Associated Press wrote an article, “These men are likely targets in an anti-Obama campaign”, naming Rev. Jeremiah Wright and William Ayers, the former Weatherman domestic terrorist, among others. One of them, Antoin ‘Tony’ Rezko, an early Obama supporter, was convicted of mail fraud and money laundering the same week the article appeared.

By July 2008, Investor’s Business Daily took note of Obama’s “Stealth Socialism” when he addressed the NAACP using the code words “economic justice” four times to a cheering audience. IBD reported that “‘Economic justice’ simply means punishing the successful and redistributing their wealth by government fiat. It’s a euphemism for socialism.”

In October 2008, the Washington Post’s syndicated columnist, Charles Krauthammer, wrote “I’ll have no truck with the phony case ginned up to rationalize voting for the most liberal and inexperienced presidential nominee in living memory.”

With the election days away in November 2008, Sammy Benoit, posted on American Thinker.com, wrote, “Please take a look at these people allied with the Obama campaign. Some of them are anti-Israel; others are anti-Semitic, and anti-Israel.” He named Samantha Power who had “called for an invasion of Israel to impose a solution to the Palestinian issue.” Obama’s open hostility toward Israel in recent days demonstrates how prescient Benoit was.

Shortly after the election, Howard Kurtz, the Washington Post’s reporter on the media asked “Are the media capable of merchandizing the moment, packaging a president-elect for profit? Yes, we are.” Then he touched on the key role the media had played leading up to Obama’s election and afterward. “We seem to have crossed a cultural line into myth-making.”

“Whew! Are journalists fostering the notion that Obama is invincible, the leader of what the New York Times dubbed ‘Generation O’?” asked Kurtz.

In rapid succession, with some rejections, President Obama filled not only his cabinet posts, but added an astonishing level of advisors, quickly dubbed “czars”, to the White House. Their ranks included the true believers in the global warming hoax including a former Environmental Protection Agency director who had just resigned from a post as commissioner for the Socialist International Commission for a Sustainable World Society. Czars and cabinet members all represented the antithesis of moderation.

Moderation is not a word anyone would apply to the Obama administration. By February 18, 2009, political guru, Karl Rove, pointed out that “Less than 700 hours after taking the oath of office, President Barack Obama signed the largest spending bill in American history.”

His eligibility to hold the office was already an issue by February 2009 and it is not going to go away. Dr. Jerome Corsi’s new book, “Where’s the Birth Certificate?” is a New York Times bestseller, its sale buoyed by widespread and growing concerns that Obama, under the terms set form by the U.S. Constitution, was not and is not eligible. Not only are there questions about his alleged birth certificate, but his Connecticut Social Security number as well.

After “Obamacare” was literally reamed through the House and Senate on a strict party-line vote, the public began to have some serious concerns. The massive assault on Medicare would bring a million people to Washington, D.C., to protest it prior to the vote and would spark the Tea Party movement. By November 2010, control of the House would return to the Republican Party and Democrats had lost members in the Senate.

As voters begin to scan the November 2012 horizon, Henniger wrote “Never forget: That historic 2008 victory came with 52.9% of the total vote and 52% of independent voters. David Axelrod recently noted ‘how small the margin for error is.’”

By April 2011, Gallup reported that “Barack Obama’s approval among the poorest Americans dropped to an all-time low of 48 percent…leaving the president with less-than-majority approval among all income brackets reported in Gallup’s presidential approval surveys.” Rasmussen polling showed the same numbers.

On August 9, 1974, Richard M. Nixon resigned the office of the presidency, the first to do so in the nation’s history. The sordid events dubbed “Watergate” forced his hand. Earlier, Lyndon B. Johnson had told voters he would not run for reelection after his pursuit of the war in Vietnam had turned them against him.

It is not beyond the realm of the possible that Barack Hussein Obama may find himself in increasing difficulty in the remaining 600 days of his first and likely last term in office.

@Fred: My guess is that the eligibility issue is going to heat up the closer he gets to election day...and maybe a lot sooner.

Alan, you are assuming that an election will actually be held. Odds on that happening are lengthening daily as we see the ever tightening controls coming from the WH.

@Billy: That scenario will never happen.

We have 90,000 gun owners in America and a group called the Oath Takers, military and police, who will not permit it.