Osama is All About Obama 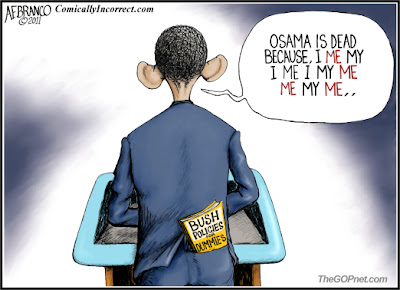 In the interest of being seen as fair-minded, bipartisan, ecumenical, unbiased, and an all-round decent American, I have been searching my mind for things about America that President Barack Obama likes.

He likes its golf courses, basketball, Hawaii, unions, and crowds, large and small that openly adore him.

He does not like “millionaires and billionaires” and, even though he will take their money to fund his reelection campaign, he wants to raise their tax rates. This, in turn, raises the question of how dumb it would be for them to give him their money.

With his hand on all the strings of government, it appears that he does not like “Big Oil”, “Big Coal”, and “Big Pharma”. These three industry groups pay billions in taxes in addition to providing employment for hundreds of thousands of America. “Big Pharma” invests millions to develop new medicines and life-saving medical techniques and technologies.

Big Oil is enjoying record profits thanks to the rise in prices due to increasing global demand for oil. So, naturally, the Environmental Protection Agency just denied Shell Oil’s bid to drill for oil offshore of Alaska. Some environmental group has requested that some useless lizard no one has ever heard of be declared an endangered species in order to shut down oil drilling in a large swath of the West.

Obama has nothing good to say about Wall Street and the banking community. In response, the heads of many hedge funds that formerly donated to his campaign are now contributing to the Republican National Committee.

Obamacare is predicted to destroy the U.S. healthcare system, widely regarded as the best in the world, so one assumes he doesn’t care much for it either. So far, twenty-eight sovereign States have declared their opposition to Obamacare, but Obama does not care.

Apparently he doesn’t like Boeing Aircraft Company because his National Labor Relations Board is trying to stop the building of new assembly facilities in South Carolina despite the thousands of jobs and tax revenues that would generate.

The auto industry companies that refused his “investment” or “rescue” did quite well without it. The Obama administration is likely to have a multi-billion loss when it sells its remaining shares in General Motors, but of course that is taxpayer’s money. For the past two years GM has been forced to divert its assets to produce expensive electric cars no body wants.

Former Presidents made accommodation to work with an opposing political party, but Obama’s initial response was “We won” and it was downhill from there. GOP leaders in Congress routinely note that he refuses to meet with them in any substantive fashion.

Obama plans to cut the defense budget and this suggests he doesn’t like the military much either even though a strong defense is essential to a nation’s security.

In the realm of foreign affairs, we know he didn’t like Egypt’s Mubarack or Libya’s Gadhafi, though the U.S. still maintains an embassy in Syria’s Damascus while its dictator kills protesters. Despite many efforts to “reach out” to the Iranian ayatollahs, they still dislike him in particular and America in general.

He was openly rude to Israeli Prime Minister Netanyahu and snubbed our British cousins in a variety of ways that did not go unnoticed. It’s hard to find a foreign leader that does not consider him to be an idiot even if they won’t go on record to say it.

The killing of Osama bin Laden gave Obama a slight “bump” in the polls, but it is not expected to last, especially since he has been polling poorly for a long time now.

In so many ways, Obama displays his disdain for those who both voted for and against him. America has never had a President that didn’t like it and, in November 2012, voters will have the opportunity to return the feeling.

Obama is Tom Hank's Forrest Gump character without the morals, Medal of Honor hero status, or love of country.

In the words of Gump's momma, "Stupid is as stupid does."

Obama is as dumb as they come and will go down as the worst president in American history, if he manages to start a Second Civil War and a Second Great Depression.