Our National Day of Prayer 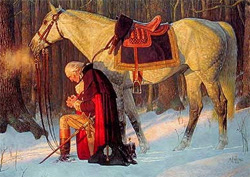 Thursday, May 5, is our National Day of Prayer. Among my many friends few regularly attend a house of prayer, nor even believe in a greater power.

I have heard it said that “Courage is fear that has said a prayer” and every time I get a request to say a prayer for someone who is ill, has passed away, is facing some adversity, I pause to do so. My favorite and most constant prayer is “Thank you” for my health, my family, my friends, my life.

The greater power to whom I address my prayers has no face, nor form, but one cannot see the beauty or experience the power of the planet we share without being impressed by an unseen intelligence and the physics and the poetry that it reflects it.

On June 28, 2006, Barack Obama said, “Whatever we once were, we are no longer a Christian nation—at least, not just. We are also a Jewish nation, a Muslim nation, a Buddhist nation, and a Hindu nation, and a nation of non-believers.” In 2002, however, 82% of all Americans were Christians while other faiths constituted about 1% each.

Obama is wrong. America was and is a Christian nation, formed as much by its values as by natural law and the precedents of English law. The Founding Fathers all believed that a democracy could succeed and survive only if led by men of virtue.

In March 2009, CNN reported that ”America is a less Christian nation than it was 20 years ago, and Christianity is not losing out to other religions, but primarily to a rejection of religion altogether, a survey published Monday found.”

“Seventy-five percent of Americans call themselves Christian, according to the American Religious Identification Survey from Trinity College in Hartford, Connecticut. In 1990, the figure was 86 percent.”

On May 6, 2009, The Washington Times reported that, ”President Obama is distancing himself from the National Day of Prayer by nixing a formal early morning service and not attending a large Catholic prayer breakfast the next morning.

Americans have always expected their elected leader to possess some measure of religious commitment and, beginning with the election of John F. Kennedy, the long resistance to having a Catholic in office ended. Jimmy Carter was known to have taught Sunday school classes and was a “born again” Christian. Ronald Reagan did not wear his faith on his sleeve, but there was never any doubt that he possessed it. George W. Bush was proud to be a “born again” Christian.

So what faith does Barack Obama profess? After twenty years attending a Black Liberation church in Chicago and having been married by its pastor, Jeremiah Wright, he was required to denounce him during the 2008 campaign for having said “God damn America.”

He professes to be a Christian, but from his first day in office, Obama has demonstrated a strong “tilt” toward Muslim nations and, as time went on, an unseemly and dangerous animus toward the Jewish homeland, Israel.

In a nation that is still predominantly Christian, but also the gracious and tolerant home to believers of the world’s other religions, signing a proclamation declaring the National Day of Prayer is an official act, part of the duty of any President.

For the first time since he became President, Obama will be in New York to lay a wreath at Ground Zero on Thursday, but it has already been announced that he will not release the photos of bin Laden’s death. He has thus thwarted the desire of all Americans and many others for true closure.

Many believe that America these days is in great need of prayer. It is good to know that the nation has set aside a day to remind us of the power of prayer.

I agree wholeheartedly, sir. The National Day of Prayer is a necessary day because it brings people together to pray and think about how they're living their lives. For the President to ignore it like he did last year was a jab at anyone who believed that prayer could help, and a pat on the back for all the atheist bigots who want religion and prayer removed from everyday life. The power of prayer is greater than anyone realizes, and gives people more help than any Obamaist policy. God bless you, sir, because you defend our principles better than many I've heard before.

(Sorry Alan, I initially posted this incorrectly while on your bin Laden post)

My prayer for President Obama:

“May his days be few; may another take his place of leadership.”

Alan, I am an agnostic. But still, this nation was founded by Christian and Deist believers, and the moral values remain.

Christians could not individually mete out justice, but by and large, this was a far more just nation before those religious citizens turned over justice to state and federal politicians.

Fools that those who have made atheism into a religion are, the essential elimination of a secular Christmas celebration has meant economic disaster for a great many businesses, and great economic losses for many.

I completely respect your right to believe as you will, and yes, prayer is at least comforting and most often a real benefit to those who do believe in a higher power.

Followers of the "moon goddess" are not, by and large, tolerant of the religions of others.