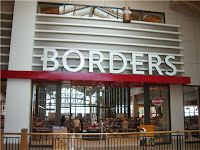 The obituary for Borders Group, the competitor of Barnes & Noble bookstores, Amazon.com’s bookselling operation, and scores of independent bookstores around the nation, appeared in the July 20 edition of The Wall Street Journal.

There was a time if you were the owner of a great paddlewheel boat on the Mississippi, you were golden. Passengers and goods moved in both directions. By the standards of the day, you were a very wealthy man. Then the railroads began laying track, connecting cities, towns, and finally the two coasts. Riverboat use dried up; often literally as they were abandoned if they got beached on a sandbar.

Henry Ford put a lot of blacksmith shops, stables, farriers, carriage makers, and horse traders out of business with his Model A, little black car. Pretty soon towns and cities were laying roads and highways as fast as they could to keep up with Americans who took to driving cars with a passion that has not ceased.

It is a mark of how out of touch with reality Barack Obama is that he keeps babbling about high speed train travel when even the government-owned Amtrak has never made a profit since it was organized in 1971. Despite the miseries inflicted on Americans by the TSA, people still get on planes to do business in Des Moines or visit the folks in Sarasota.

New technology drives out old technology and Borders specialized in one of the oldest technologies going back to the days of Johannes Guttenberg in 1452 and his use of metal moveable type with which to print books. The Chinese had invented moveable type much earlier, but used wooden type. Books, however, have remained essentially the same, printed on paper, often illustrated, piling words upon words to convey information or just to entertain with a good story.

Despite the loss of 10,700 jobs and the closing of its many locations, the loss of Borders is not the loss of people who love to read books and buy them, too. Even the Barnes & Noble chain is looking for a buyer and I suspect its days may be numbered. Amazon.com revolutionized the way Americans bought books in the Internet age, but many people still favor the local bookstore and they may actually enjoy a bit of a revival once the two big chains are gone.

For some fifty years I have had a particular vantage point from which to watch the book market. Many years ago I was a fairly regular contributor to Publishers Weekly, the primary trade magazine for the book trade. It was and still is filled with the excitement of discovering new authors and tracking the established ones. However, it is the business of the book trade that is its focus.

I have been a book reviewer for so long I can actually boast that I was a founding member of the National Book Critics Circle in 1974. There are awards named after the people I knew who helped found it, Ivan Sandrof and Nona Balakian, both delightful and both deceased.

For me, books are about my self-education and entertainment. I like sharing news of them in my monthly report, Bookviews.com, but I have felt no need to rub shoulders with fellow reviewers, most of whom—like myself—do not make a dime. You may have noticed that the book sections of most daily newspapers have long since disappeared, the Dodo birds of literary criticism.

The best news of recent times is the phenomenon of the Harry Potter series which actually enticed young people to read, to grip a book in their hands, turn the pages, and sigh when they had reached the end. And, of course, one can always read a book again!

The new gadgets, Kindle, Nook, whatever, are just another way to read books. Someone still has to write them and someone has to take a gamble and publish them. Increasingly, that someone is the authors themselves. Here, too, modern technology allows one to have books printed on demand so you need only order as many as you require depending on sales.

One of the most interesting trends for me is the way many authors of really good novels have simply bypassed the mainstream publishing houses. With a printer and an Internet site, plus word of mouth, a book can generate enough sales to often be published later by the same publishing house that might have earlier rejected it!

So, goodbye Borders. No doubt those lost jobs will add a digit or two to the nation’s growing unemployment rate and those stores will be rented out to tattoo parlors, nail salons, and others.

But not goodbye to books! If television bores you silly, try reading. Your brain will thank you.

Great post Alan. In this household we have a nook, an iPad and an iPod Touch, all used to read various and sundry published works, many in the public domain (downloaded free from my library in Volusia County). We are also surrounded by bookshelves crammed with books not yet read, read and annotated, and some where just the pictures are appreciated. We jumped on Amazon years ago. The locals and the big box stores don't offer enough to compete. It's a time where my dollars go the farthest.
It reminds me of FW Woolworth and Company. My dad worked for them for fifty some odd years. In the last years the office was crowded with Harvard MBAs who sold the assets to keep the bottom line positive. In my dad's time everyone in the executive offices had begun as stock boys at age 14, they knew retailing. They didn't know about the change of heart of the American buyer. S.S. Kresge had it right with K-Mart, Woolworths lost their life with Woolco.
Life goes on and something better will come out of the Borders (and probably Barnes and Noble) failure.

Great article! Like you, I have been an avid reader all of my adult life. First we start out being in awe of the wonderful pictures being painted with words in our heads. As time goes by we come to the realization that reading for pleasure is escapism. And I am not decrying this form of escapism either. It is necessary. Just like going to the movies….only much better, longer lasting, and more profound and….as you said….you can always pick up a favorite book to reread. And the fascination of the second or third reads is that you pick up the nuances you missed in the first reading. I read Michener’s “the Source” when I was 19 and enjoyed it. I reread it 30 and understood it.

Since time and circumstances change I never seem to have time for fiction any longer, and I miss it. I read mostly issue oriented material or technical material. It isn’t nearly as much fun, but it is demanding and gives me the ammunition to defend my industry, and I can’t seem to fit “fun” reading into my schedule any longer. I tried to reread The “Sand Pebbles” recently. I never got past the second chapter. Too much on my plate. The movie was pretty good….but as usual, the book was special.

I will miss Border’s because I just loved browsing. Buying on-line is much easier, but it isn’t the same. But that is the way life is. Something better comes along and it is adopted, but nothing is perfect. The best we can hope for is the most acceptable imperfection.

Walmart, in spite of the abuse they receive from the left, is what Sears was 50 years ago, only more. When automation first came in the 50’s people went nuts because jobs were being lost. But better and more jobs, better products, more variety and an overall better economy were eventually created. Things change. We just don’t need that many buggy whips any longer.

Technology has a way of antiquating methods and practices. For the most part, technology improves and enriches everyone's life. People forget, however, that most technology is born from capitalism. Someone has an idea for goods or services that people are willing to pay more for than what it cost to make and voila; profits are made and jobs are created. That's how it's done. Quite simple. Why liberals can't get it is beyond me.

They just don't seem to be happy unless they are attacking big oil, big pharma, or big something. Of course, 'Big Press' is off limits. It's not alright to attack a capitalist operation run by liberals. Watch out. The New York Times, Washington Post, et. al., will be falling soon enough and going the way of Bortners and Barnes and Noble thanks to technology. People don't need to read their news on a piece of paper printed with cheap ink that comes off on their hands.

Come to think of it, where are the tree huggers when you need them? Why, think of the millions of trees that could be saved if the presses were all shut down. Oh, yeah, I forgot. Liberals own 'Big Press' so that's OK. They can kill all the trees they want. Let an evil, greedy, Republican capitalist paper kill trees though and we all know what happens.

In the interest of accuracy, Henry Ford's first car was the Model T. The Model A came in the late 20's.

Good article Alan. Goes to show the only thing you can count on is 'change'.

Ya know, I was elated when I heard they were closing the borders...

Then I found out it was Borders...

I was deeply saddened to see the "Store Closing" signs at my local Borders. I loved going in there and sitting to read - usually buying the book in the process.

I'm not a huge fan of Amazon, because I can't hold the book in my hands and see how big the type is (over 40, the eyes are failing), or if there's enough room in the margins to write notes. I was disappointed with my copy of Ayn Rand's Atlas Shrugged (purchased from Amazon) because this edition has very small print - and I actually have to break out my reading glasses to read it.

Amazon is great - but I love browsing in the bookstore.