Mommas, Don't Let Your Daughters Grow Up to be Amy Winehouse 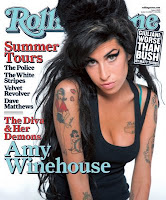 Being of an age when the singers with whom I grew up included Doris Day, Dinah Shore, Ella Fitzgerald and comparable talents who combined beautiful voices with beautiful lyrics, I had not paid any attention to Amy Winehouse and, on the news of her death, had heard only one of her mercifully short catalog of songs.

Dead, no doubt, from an overdose of illicit chemicals washed down with alcohol, Winehouse reminded me of Willie Nelson singing, “Momma Don’t Let your Boys Grow Up to be Cowboys”, a cautionary, but wry warning about life lived hard and often cut short. Willie is now in his late seventies, still (allegedly) smoking pot and still making great music. Winehouse is dead at age 27.

Unless, in its usual fashion, Hollywood decides to make a movie about her wasted, tormented life, Winehouse is likely to be just a footnote or paragraph among other rock’n rollers such as Janice Joplin, Jimi Hendrix, Kurt Cobain, Brian Jones, and Jim Morrison, all of whom died at age 27.

A younger generation that apparently thought she had talent and the usual media groupies are lamenting her passing, but there is little in her life that anyone should mourn or wish to emulate. British singer-songwriter Billy Bragg summed it up saying, “It’s the drug abuse, sadly.”

It is sad when someone deliberately, knowlngly self-destructs with an addiction that can be overcome. In one Winehouse opus, she says others told her to get into “Rehab” and her answer was “No, no, no.”

There are too many among us who have known or had to cope with a member of the family or a friend destroyed by alcohol or drugs. It is far too common in the United States, a nation of addicts whose numbers are so great they literally fuel the Mexican drug cartels that are ravaging Mexico with turf wars and corruption while feeding the American demand.

In my case, the boy across the street from my hometown where we mostly all went onto college and careers, followed that course, married and had kids, and had a promising career. He lost his job and his family to alcoholism. It took away his dignity and his reason to live. I had known him in the full vigor of youth and I witnessed his descent to an early grave. It was not pretty.

Nothing about Winehouse was pretty, either in her physical persona of garish tattoos and a preference for dressing like a slut. She even sang a song about it that was titled with the F-word. I had the misfortune of viewing that video and it reminded me of how different, how coarse, how vulgar our present day cultural scene is compared to the sweet joys of my youth.

In a thoughtful article by Associated Press writer Jake Coyle he noted that “Early death typically mythologizes pop star, inflating their reputations. Pop culture writer Chuck Klosterman, in his book, ‘Killing Yourself to Live’, wondered why ‘the greatest career move any musician can make is to stop breathing.’”

It’s not a career move. It’s a career-ender and, regrettably, it is not even a warning to a younger generation regarding the idiocy of taking drugs or over-indulging alcohol. Coyle wrote that “Winehouse’s death, an unfortunate but unsurprising end to a long, public decline, might be best remembered not just as another tragic loss, but as a modern portrait of how untrue those rock myths really are.”

Rock’n Roll came of age the same time I did. I can still remember that, when the Beatles and Elvis Presley made their debuts on the Ed Sullivan Show, they wore suits and ties. It was a gentler time when the Beatles sang “I want to hold your hand” and Elvis lent his baritone to both “Love Me Tender” and gospel songs.

Yes, they could rock with the best, but there was a spiritual center to their lives, with the exception of John Lennon who wondered what life would be like without a Heaven or Hell.

The answer to Lennon’s question is Amy Winehouse.

I've always had an ear for musical talent, and the first time I heard Amy Winehouse sing, I concluded that she was very gifted. She could have brought so much enjoyment to so many people, yet today, she becomes just another statistic.

How many times does this tragedy have to repeat itself before people wake up?

Kids, are you paying attention?

Like you, it is hard for me to relate to these substance abusing immoral entertainers. I've never heard her sing, but I agree with your physical description.

When I was in high school, a long time ago (1959), rumor had it that someone smoked a marijuana cigarette. Before that the only reference to pot was the Mexican song, 'La Cucaracha'. There were no drugs. No one had any interest in them. Had heard of heroin, but that was a small problem in New York City. My how things change. When looking back, I say to myself, 'I lived in the best of times'.

By the way, Willie's song is: Don't let your "babies" grow up to be cowboys'

@Dean. We did indeed grow up in the best of times.

I hope Willie Nelson doesn't get angry about my misquoting his song tile.

Has talented become another word for stupid? At some point in time a person has to know that putting your hand on a burning surface will cause some sever damage.

This woman was 27, and I will be the first to acknowledge that today’s 27 isn’t the same as 27 in 1964, but it is still old enough to know how stupid their actions are.

Some years back, I was surfing the channels when I noticed that they started doing biographies of rock stars. I believe it was MTV, but I could be wrong. I actually started to watch for them because there was one common thread. They all were abusing alcohol and drugs and a major portion of them died young as a result.

That show didn’t seem to last too long….and I suspect it was because someone at some point at the studio or in the rock business decided it was bad for business to outline how degenerate and miserable these rock “heroes” actually were…..and apparently still are.

As for the value of their talent….has anyone recently seen Kathryn Grayson on AMC lately; or heard Mario Lanza performing Student Prince. WELL…..THAT WAS TALENT!

It is always sad when some young person throws away their life, but I am not going to bleed all over myself for this foolish, arrogant person. There are far too many worthy people to be concerned about.

Every era's stars have had issues with abuse. I believe Doris Day headed down that path for a while. What is often not mentioned is how the entertainment industry not only enables such behavior (very difficult tour schedules, the need to keep putting out hits, ripping off profits, ...) but usually makes a whole bunch of money selling their songs once dead.

These freaks are like doing a rain dance in Texas..... if you dance long enough it will rain. If you Winehouse long enough you die.

In the later instance they never believe "rain" will happen.