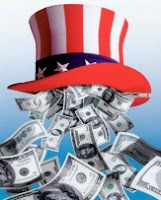 The term, “magical thinking”, has been around a while to describe what individuals do to cope with the vicissitudes of life. I, for example, regularly buy a Mega Millions lottery ticket in the hope of winning when, logically, rationally, I know the odds are millions to one of that ever happening.

Magical thinking can be found in all aspects of life and it is surely magical thinking that caused America’s politicians, starting back around the turn of the last century, to believe that a really big government could take care of everyone when, prior to that, self reliance, support from the family structure, and hard work were the early guiding principles.

Indeed, the U.S. Constitution is testimony to the Founding Father’s intense distrust of a centralized government—hence checks and balances—and the fallibility of individuals entrusted with power over others. It turns out they were right because now there is no aspect of our lives into which government does not intrude.

A lot of this can be traced to the rise of Communism, the handiwork of Karl Marx, and its adaptation into Socialism, a modified form. In 1917 Russia had Communism imposed on it during the Bolshevik Revolution as the antidote to the rule of the czars. In time it utterly failed, but few have taken a lesson from that. It wreaked havoc and death on Russians for over seventy years.

Indeed, throughout the last century, wars were required to defeat various forms of totalitarian rule. Even the Peoples Republic of China eventually embraced its own form of Capitalism while retaining power in the hands of a centralized government.

Communism is a kind of magical thinking based on collectivism that always seems to come back to a handful of men ruling by coercion.

In 1908, the Socialist Party nominated Eugene V. Debs to run for president. A dedicated unionist, Debs had studied Marxism while in jail. What he believed then is still prevalent today. “When I joined the Socialist Party,” said Debs in accepting the nomination, “I was taught that the wish of the individual was subordinate to the party will, and that when the party commanded it was my duty to obey.”

“I am not satisfied with things as they are,” said Debs, “and I know that no matter what administration is in power, even were it a Socialist administration, there will be no material change in the condition of the people until we have a new social system based upon the mutual economic interests of the people; until you and I and all of us collectively own those things that we collectively need and use.” Debs was soundly defeated.

The election of Franklin D. Roosevelt, however, brought socialism to its zenith of power in America. He remained in office from 1933 until his death in 1945. Social Security is collectivism. Medicare and Medicaid is collectivism. Government “make work” programs are collectivism.

And a government that believes it can continue to borrow and borrow and borrow from the rest of the world to maintain sixty percent of its annual budget for “entitlement programs” is engaged in magical thinking.

It is magical thinking to believe that the same ratings organizations, Moody’s and Standard and Poor’s, should be trusted. They both granted top grades to the “government entities”, Fannie Mae and Freddie Mac, which plunged the nation into a huge financial crisis. Indeed, the rating organizations never saw the implosion of Wall Street institutions coming until billions in public funds were needed to keep a complete collapse from occurring.

Spending more to get out of debt is magical thinking and yet that is the only “plan” the Democrats and the President offer the public. A July 25 Wall Street Journal editorial, “Toying with Default”, provided an insight to this saying, “Here’s a number for the debt history books: Mr. Obama’s final offer in the Biden talks was a $2 billion cut in 2012 discretionary spending. The federal government spends more than $10 billion a day.”

At a time when European nations are imposing major austerity programs, the Republican Party is charged with having to save the nation from a Democrat Party that has reluctantly concluded that a reduction in spending is necessary and increase in taxes is not achievable..

As a nation, if we are to survive, we must disengage ourselves from a century of “progressive” programs that are not based in reality. Debts must be paid. Entitlement programs must be revised and eventually abandoned. Government must be reduced in size and scope. Private enterprise must be set free to function and thrive.

The present generation of Americans must empower Republicans in Congress to save the nation from the errors of the past, the wild spending, and the confiscatory effort to “transform” the nation into a collectivist society that mirrors failed “progressive”, Communist and Socialist thinking and programs.

So, you are prepared to give up your Social Security payments and Medicare assistance--when you reach the appropriate age? Are you prepared to give up the technology for treating your cancer, which was originally researched by the National Cancer Institute (this research conducted because the investment risks to a private bio-medical company were too high for justification)?