Obama is Determined to Destroy America 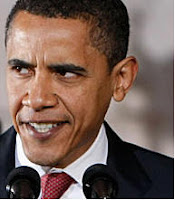 It is astonishing that Barack Obama seemingly learned nothing from the 2010 national elections in which the Republicans regained control of the House with a net total of 63 seats. For the Democrats it represented the greatest loss in the House midterm election since 1938, which occurred nearly ten years into the Great Depression.

It is the House that determines the spending and borrowing to maintain the nation, though the President traditionally sends a budget. Obama did not. Indeed, as Speaker of the House, John Boehner, has said, Obama has never put anything on paper. Negotiating Obama's demands have changed week to week and now day to day.

What has happened to “No drama Obama”? The present impasse, topped by an angry press conference late Friday afternoon is entirely of his making. Neither the White House, nor the Democrats in Congress have put forth any plans, let alone any numbers, other than to propose tax increases, now euphemistically called “revenue” increases.

The 2010 Democrat losses in the House are largely attributed to the passage of Obamacare, a piece of legislation that was not only widely protested, but that led to the Tea Party movement and new members of the House representing its common sense agenda. The House subsequently voted to repeal Obamacare and it is being contested in the courts by 26 States.

What Americans have witnessed over the first two years of his term is Obama’s continual blaming of all problems on either his predecessor or the Republicans in Congress. What they are witnessing is the duplicity of a man who appears incapable of telling the truth from day to day.

The nation is in for a week of “high drama”, all of which could have been avoided had Obama agreed to any of the proposals put foreword by Republicans from Paul Ryan to members of the so-called “gang of six.” In the Democrat controlled Senate there has been nothing but obstruction.

One senses that this is exactly what Obama wants. While saying he does not want the U.S. to default on its obligations, what better way to destroy the nation than to destroy its “full faith and credit” regarding its debts?

The emphasis the Founding Fathers put on the necessity to meet the nation’s debts can be found in Article VI of the Constitution. “All debts contracted and engagements entered into, before the adoption of this Constitution, shall be as valid against the United States under this Constitution, as under the Confederation.”

Article I, section 7, states “All bills for raising revenue shall originate in the House of Representatives, but the Senate may propose or concur with amendments as on other Bills.”

There is no mystery as to how the U.S. can recover from the present recession. Government spending must be reduced. Tax rates must be reduced for corporations and the middle class to encourage investment, growth and more employment. Entitlement programs will have to be revised to ensure they can meet their obligations. They represent sixty percent of all government expenditures.

A government that must borrow forty cents of every dollar to pay its debts and whose current debt of $14 trillion equals the entire annual gross domestic product of the nation is endangering the present and future economy for present and future generations of Americans.

At this writing, it looks as if Obama intends to deliberately implode the nation’s ability to meet its obligations and he has used the most raw fear tactics to achieve his goal, falsely claiming that Social Security checks would not be sent, that the military would not be paid.

If ever a President was begging for impeachment the time for such action has arrived. The evidence that he was ineligible to run for office and to hold it is beyond question, if only because he was not a “natural born” American whose both parents were citizens. His father was a citizen of Kenya.

Raise the debt ceiling. Impeach Obama. America must be set free. What he is attempting to bring about is the worst “change” imaginable in the nation’s history.

Obama is LIVID.. His greatness and intelligence has been challenged and he is totally pissed off...

Maybe that vein in the side of his head will... Never mind... You KNOW what I'm thinking, and he IS that stressed out...

#Fred:
We are truly seeing the worst of Obama as the mask falls away.

Time to impeach the usurper, the imposter.

Obama is indeed determined to destroy America. What he doesn't realize is that he too will be destroyed, if I understand history correctly.

I'm inclined to think that if Congress did try to impeach Obama, he would simply name himself dictator, with the far left in the Senate and House supporting him in his bid for an Imperial Presidency.

Further, I won't be surprised at all if Obama cancels the 2012 Presidential election, claiming that the nation is in "crisis" and needs his and only his "leadership".

It seems we have elected our own Hitler.

I've had someone tell me that Obama was an inept president. I told them that he's not - he's doing exactly what he set out to do. Destroy America. Destroy our free market system, and make himself dictator.

I am past concerned for the future of this country if he is not impeached.

I second that motion ...

The man is the epitome of evil in any sense when it comes to not only his hatred of his country and its ideals, but also his complete lust for power. As stated in the Detroit Free Press, 'Obama is insisting that the debt ceiling extension be large enough to ensure that the issue does not arise again until after the 2012 elections..." one definitely gets the impression that his only concern is keeping his position long enough to finish delivering us to his Leftist Soviet Style handlers!

Every action he takes, every word he, his wife and his cohorts utter, every obstruction he and his lackeys put out there (let's not forget the impeachable offense now being orchestrated by Bozo and his A.G. as to Project Gun Runner), every openly blatant lie to the electorate and every cave in to the Radical Islamic fundamentalists in supporting his open hatred for Israel and in my eyes the Jewish race in general combined with his complete disregard for our basic principles just reinforces the perception of his Socialist, dictatorship style way of governing. Mix that with an ineptness that makes jimmy Carter look like a saint and you have the recipe for the disaster that is now facing us.

And let's not forget so many of the brain dead electorate who not only refused to do their homework on this idiot, but in fact still support him! Hell, the majority of Jews here in the states will would supposedly vote for him again, someone who is open in his hostility towards them!

There is a lot of blame to spread here, but the main factor is as you said Alan! This man's purpose in life is to destroy this country as we know it. He expressed this in his books, his associations with radicals of any ilk and most of all in almost every action he has taken in his so called leadership roles points to this one sad conclusion.

It's amazing to me that Nixon was impeached for a little campaign espionage, yet Obama is flagrantly trampling our constitution, breaking a multitude of laws, and people have even died, yet nobody seems to be able to muster the courage to call for HIS impeachment.

I suppose the prospect of having Biden at the helm might be one reason, but the way I see it, having an inept, lame duck like Biden in charge would have to be better that an America-hating tyrant.

I agree with your analysis of Obama's likely next big move to destroy the Free Republic, and predicted as much myself a week ago.

I think what is coming up in the next couple of weeks is nothing less than the "Gettysburg" of the current bloodless civil war between the forces of slavery and freedom.

Like the situation on July 3, 1863, the forces of slavery's chance to victory depend on a last throw of the dice. If the slavery party fails to take the Republican position, the great retreat must begin and socialism American style will slowly but surely be destroyed in the coming years.

We know that the rebel Robert E. Lee and his Confederate army could not break in patriot line at Gettysburg and destroy liberty, but soon a latter day rebel chief may the lines and destroy the Union.

Racism and denial. You people are disgusting!
REPUBLICANS JOB #1, IS TO DESTROY THIS COUNTRY AND THIS PRESIDENT.They are obsessed with it. How quickly they forget that during the Bush presidency, there were six worse days for the DOW. During the Reagan presidency, there were two worse days (percentage), including the worst percent drop ever. You can't blame it all on Obama. You really think an American President is hell bent on destroying this country? What possible end game would this achieve (holding my breath and waiting for conspiracy theory). Put down the pipe man and stop being racist!