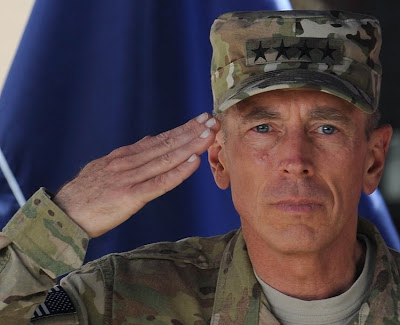 No one can doubt General David Patraeus’s devotion to America and to the U.S. Army in which he served much of his life. In order to take on the position as Director of the Central Intelligence Agency he had to retire, but his vast experience will serve him and the nation well in his new role.

“All In: The Education of General David Patraeus” by Paula Broadwell with Vernon Loeb is part biography and part an analysis of what went right in the Iraq conflict and what went wrong in Afghanistan, now the longest war in U.S. history.

Patraeus was a classic over-achiever, blessed with intelligence, natural leadership skills, and with great mentors as he made his way up the promotion ladder. His devotion to the U.S. Army and America cannot be questioned. A West Point graduate, Patraeus excelled as a student and, in the course of his later assignments, gained an extraordinary knowledge of the world. He was tapped to write the Army’s manual on counter-insurgency warfare.

The success of his methods is credited with turning around the war in Iraq, using the surge of troops that then-President Bush initiated. Iraq was pacified, but as we now know, it is showing signs of breaking apart as rival Sunnis and Shiites return to their ancient conflict for power. Throughout Iran was a covert participant that armed insurgents to kill American combatants.

A key to understanding Patraeus is his devotion to an oath that requires obeying his commander-in-chief’s orders, advising both Bush and Obama candidly behind closed doors, and defending their decisions in public. This is the way all military operate, for good or ill, as regards the outcome of any war.

Ms. Broadwell graduated with honors from West Point who has had considerable access to Patraeus and his colleagues-in-arms. She has had more than a decade in military service and over a decade and a half of work in counterterrorism and counter-insurgency. Her book is a clear-eyed look at the facts about the general and his commands.

One paragraph says a lot about Afghanistan.

A recent Wall Street Journal article about the billions stolen and wasted by the U.S. Agency for International Development (USAID) program in Afghanistan revealed the futility of winning hearts and minds in a nation operating with a seventh century mentality.

Deep into the book Ms. Broadwell notes that “Patraeus never argued that counter-insurgency was the only way America should fight—only that it was the best way to pursue wars at hand in Iraq and Afghanistan.”

At his retirement ceremony, Patraeus said, “it will be imperative to maintain a force that not only maintains the versatility and flexibility that have been developed over the past decade in particular.”

“I do believe that we have relearned since 9/11 the timeless lesson that we don’t always get to fight the wars for which we are most prepared or most inclined.” He called for “the full-spectrum capability that we have developed over this last decade of conflict in Iraq, in Afghanistan and elsewhere.” Full spectrum means being able to fight any conflict anywhere, whether because it was thrust upon us or we chose to engage in it.

The U.S. has engaged in conflicts since 9/11 that could not be won in the traditional definition of “victory” despite the courage and sacrifice of our fighting men and women.

Now, just as in Vietnam and Korea, our forces have either been withdrawn or are now withdrawing from present fields of combat.

We have been fighting stalemates for a long time because the era of full engagement, a world war fought until unconditional surrender, appears to be over. In modern wars, our enemies are thwarted from their goals, but they remain in place to fight again.

The current Islamic battles of an asymmetric war against the West will continue and have even reached our shores on 9/11. Preemption will be necessary and the courage to wage it will be essential.

As often as not, a nation has little choice but to wage war and, despite disappointments regarding the conflicts since 9/11, Iran is daring Israel, the U.S. and the world to challenge its intent to acquire nuclear weapons. Had it not openly declared its intention to destroy Israel, there might be mitigating reasons to withhold action, but there is not.

Following a recent, large amphibious U.S. military exercise, the troops involved are being positioned in anticipation of a new Middle East conflict. This time it will be Iran.

This is occurring, however, as the U.S. military is being systematically hollowed out with major reductions in all its forces; flying aging aircraft, having fewer warships, and, incredibly, anticipating the reduction of eight brigades of the Army.

The President and Congress, busy borrowing billions to pay the enormous national debt imposed by their actions, have weakened the nation’s ability to respond to the next war.

Even so, the nation’s armed forces were and are led by men like Patraeus and the best-educated top- ranked officers this nation has ever had. Until the elections of Presidents Clinton and Obama, they had always been commanded by men who had served their nation in uniform.

Sad but true, Alan. From what I can see of the nations in the world, we will be reducing our armed forces exactly when we will soon have need of them.

IMHO, we should be designing and fabricating all of our military gear here in the US by vetted American citizens.

Our "supposed" allies simply have neither the will or the funds to do us any good, and the prospect of sabotage is growing. Plus, it takes a long time to reverse engineer military gear that has been designed by a foreign business in a foreign country.

Just got done linking this at my blog. I may but hope you find my comment worthy.