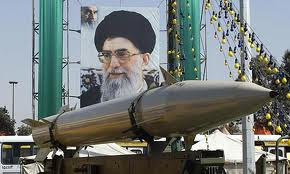 The debate over when or if Israel will attack Iran’s nuclear facilities has been raging of late and I am beginning to suspect that much of what passes for news represents a charade being orchestrated between Israel and the United States to ratchet up pressure on Iran’s leaders.

President Obama will address the annual meeting of the American Israel Public Affairs Committee (AIPAC) on Sunday and no doubt his speech will be closely parsed for any indication of an official U.S. position regarding Iran’s aggressive pursuit of nuclear weapons. The address by Israel’s Prime Minister, Benjamin Netanyahu, will likewise be analyzed. Suffice to say, both oppose a nuclear Iran.

One fact stands out. U.S. efforts, in concert with other Western nations and aided by some Middle Eastern nations, have put tremendous pressure on Iran’s ability to sell its oil and to collect the revenues. It is having some success.

Another fact that is often overlooked is that Iran has avoided war since its conflict with Iraq from September 1980 to August 1988. It was costly in lives and treasure for Iran and ended in a stalemate. Later Saddam Hussein would attack Kuwait an act that played a role in the decision to put together a coalition to drive the Iraqis out and to later invade Iraq and depose Saddam.

Iran has preferred to use proxies such as Hezbollah in Lebanon and Hamas in Gaza to pursue its attacks on Israel. It supports terrorist activity. Its alliance with Syria is going to be affected by the outcome of the internal attacks on the Assad dictatorship. The bulk of the Middle Eastern nations are united in their condemnation of the Syrian leader. Except for pro-forma support from Russia and China in the United Nations, Iran is increasingly isolated.

As Prof. Barry Rubin recently wrote in The Jerusalem Post, credible observers and analysts of the Middle East believe that Iran wants nuclear weapons because “Iran’s main goal, like that of Pakistan, is to make itself immune to any reprisals for terrorism and subversion by having nuclear weapons.” Prof. Rubin asserted that “In part, the rationale for the nuclear program is outdated, though that certainly won’t stop Tehran from pursuing it.” Prof. Rubin is an Israeli scholar, a research director, and a member of the editorial board of the Middle East Quarterly.

Prof. Rubin noted that, “After 32 years in power the Islamist regime in Tehran has yet to do something really adventurous abroad.”

Then there is the belief by military experts that Israel may, in fact, lack the capability to effectively neutralize Iran’s nuclear program. Richard Russell, a professor at the U.S. National Defense University’s Near East South Asia Center for Strategic Studies in Washington, D.C., has said that “The Israelis actually have limited means of attacking Iran’s nuclear program. This is a very, very difficult problem for the Israelis, and it’s getting more and more acute.”

While acknowledging that Israel’s air force is “capable of launching an attack on Iran and causing damage”, Yifah Shaper, director of the Military Balance Program at Tel Aviv’s University for National Security Studies, has said that “It is far from capable of disabling the Iran nuclear program. That would take at least a month of sustained bombing, That’s not something Israel can carry out alone.”

Retired U.S. Air Force General, Charles ‘Chuck’ Wald, calculates that an attack on Iran’s nuclear facilities would require in excess of one thousand sorties. None of this is lost on the Israelis.

While Israel has previously destroyed nuclear reactors in Iraq in 1981 and again in Syria in 2007, the logistics of disabling Iran’s extensive nuclear facilities would be daunting. Israel would simultaneously have to invade southern Lebanon to deter Hezbollah’s use of thousands of missiles there.

While I have previously expressed the view that Israel would, if it lacked any other option, attack Iran, a closer examination of the many factors involved in such an operation suggests that it would only occur if there was credible evidence that Iran was preparing to launch nuclear-armed missiles. Current intelligence analysis suggests that Iran is still far from manufacturing the nuclear warheads for its missiles.

The question remains whether the ayatollahs running Iran would risk any attack by Israel and while, in general, that option exists, the economic weakening of Iran by current sanctions, they would likely exacerbate Iran’s leadership facing problem a restive, unhappy population that wants them out of power. An attack might serve to unite Iranians..

Finally, Iran’s military is far from capable of dealing with an Israeli air attack that might conceivably trigger support by the U.S. and allied nations. None of the Gulf nations has any love for Iran. There are lots of U.S. military assets in the region.

As the rhetoric heats up, Iran has been making a show of its military strength holding military exercises and by sending elements of its limited naval capability through the Suez canal and meaningless trips in the Mediterranean. It continues to threaten to close the Strait of Harmuz. Its Air Force is nothing to write home about either. It is composed of aged U.S.aircraft and Russian aircraft.

While a war of words will continue between Israel, the United States, and Iran, a cold calculation argues against an Israeli attack and against U.S. involvement after more than a decade of U.S. conflicts in Afghanistan and Iraq. Neither nation wants a shooting war with Iran.

The odds, in this observer’s view, are against an Israeli attack despite my earlier concerns that it could or would occur in the near term.

I see no regards of Israel in the White House in any way, and Obama has been most considerate of fanatical Muslims in general.

Right now, as of now, Dr. Chu has stated that high fuel prices are no problem for the White House.

The plain fact is that there is a real shortage of fuel, and operation of our military on a wartime footing eats up a huge amount of fuel.

I rather suspect that Israel shall have again look out for itself, and then be detested in the UN for defending itself.

I think that it will be a war of words not much longer. Israel has just said that the US would not be told anything before a serious attack on Iran had taken place.

I sincerely wish you have a point here, Alan. I don't trust any politician - a matter of principle, that's what they're there for - but Obama is the clumsy champ. Sure, after Hitler, Churchill, Gandhi and Stalin: they were much better at the game (and then some others.)

@retch: Lumping Churchill and Gandi in with Hitler and Stalin is just so wrong in so many ways. It is the difference between good and evil.