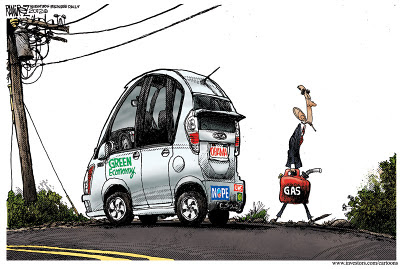 Michael Brune, the Executive Director of the Sierra Club, holds degrees in economics and finance from West Chester University in Pennsylvania. He is the author of “Coming Clean—Breaking America’s Addiction to Oil and Coal”, published in 2008 by the Sierra Club.

Recently, Brune bragged that he and the board had turned “away millions of dollars”, noting that “It sounds crazy” and explaining why. In 2010 Brune learned that, “beginning in 2007 the Sierra Club had received more than $26 million from individuals or subsidiaries of Chesapeake Energy, one of the country’s largest natural gas companies.”

The fact that the Club’s Executive Director could brag about turning away millions in donations suggests that he wasn’t paying attention in college while studying economics and finance---or that like so many environmentalists, he is a moron. Or just a hypocrite. Time magazine revealed the actual story in its February 2nd edition. The Sierra Club was shilling for Chesapeake Energy.

And, yes, the corporations that give millions to the Sierra Club or give in to its demands are morons, too. In his previous job at the Rainforest Action Network, for seven years Brune led assaults on Home Depot, Citi, Goldman Sachs, Bank of America, Kinko’s Boise and Lowe’s. To put it another way, to hell with corporate jobs, dividends to investors, and profits with which to grow. Saving the rainforest came first. Cutting down a tree does not mean another one will not grow in the same place.

And now, at the Sierra Club, apparently the new battle is against natural gas. Can it get any more stupid? Like millions of Americans, my home of more than sixty years was heated by gas and the kitchen stove used gas. It was cheaper and cleaner than coal. As this is being written vast new reserves of natural gas are being found all over the nation, but as far as the Sierra Club is concerned, drilling for it poses risks “to our air, water, climate, and people in their communities.” Short of putting your head in the oven and turning on the gas, there are no significant risks and haven’t been any in the sixty years or so that “fracking” has been used to access natural gas.

Meanwhile, the U.S. is set to become a net exporter of liquefied natural gas by 2016 according to the U.S. Department of Energy’s Energy Information Administration. It expects a cumulative increase in U.S. natural gas production through 2036.

To suggest otherwise is a form of environmental dementia reflected in their fear and hatred of every form of energy, be it oil,  coal, natural gas, or nuclear. To quote Brune, if it “sounds crazy”, it probably is.

If you want to know what’s crazy, it’s the Ohio Environmental Council praising First Energy Corporation “for its plan to permanently close six coal-fired plants.” Yippee! Who needs plants that have the capacity to generate 2,700 megawatts of electricity—enough to power more than 600,000 homes? Who needs the jobs and revenue they also generate? And who needs the electricity? First Energy has read the writing on the wall that says the Environmental Protection Agency is determined to close down every coal-fired plant in America, even if they currently produce FIFTY PERCENT OF ALL THE ELECTRICITY!

Just how stupid, how moronic are environmentalists?

One way to answer is to look at the Obama administration’s track record when it comes to “green energy.”

Recently the President was seen leaving an event promoting clean energy in a motorcade of twenty-two (22) gas-guzzling vehicles. Well, do as Obama says, not as Obama does.

After three years of the most astonishingly stupid and wasteful green energy policies inflicted on Americans, it is hard keeping score of the various beneficiaries of government largess that are going bankrupt.

The most famous at this point is Solyndra that went belly up taking a half billion in loan guarantees—taxpayer funded—with it. Beacon Power, a green energy storage plant, filed for bankruptcy last fall took with it $43 million of more Department of Energy loan guarantees. Ener1, touted during a visit by Vice President Joe Biden—who inadvertently called it “Enron1”—filed for Chapter 11 bankruptcy. The electric car battery maker had received a $118 million grant from the Obama administration.

Since then, Evergreen Energy, a manufacturer of batteries for electric cars and recipient of “stimulus” funds also filed for bankruptcy. Amonix, Inc., a manufacturer of solar panels that had received $5.9 million in “stimulus” was stimulated to cut two thirds of its workforce, some 200 employees, barely seven months after opening a factory in Nevada.

The Obama administration has been hot for electric cars and hybrids. They are costly and you would have to drive one for a decade or two to amortize the sticker price with fuel savings. They have proved to be a big money-loser for auto manufacturers. At this point, only about 3% of all the cars sold in America are electric or gas-electric hybrids.

There’s more, but I won’t bore you with the trail of bad government loan guarantees and grants, more wasted “stimulus” millions.

The lesson here is that any organization, government agency, or company claiming to be “green” is composed of morons, charlatans or a combination of both.

Great article! You say that “The lesson here is that any organization, government agency, or company claiming to be “green” is composed of morons, charlatans or a combination of both.” I would have included insane. How else can anyone see reality and still cling to these things unless they have serious mental problems.

Now that the Sierra Club is biting the hand that fed them! I wonder if these fools at these large corporations, who only look for short term gains at the expense of everyone else, finally get it. I doubt it since this pattern has been repeated so often that they are incapable of seeing beyond “now”.

They would have fought to have a seat at the Captain’s table on the Titanic as it was sinking.

Firstly . . . the USA has enough known and reachable equivalent barrels of oil (oil, coal and natural gas) to meet our energy needs for at least 7 centuries.

Secondly, carbon dioxide is not only not a pollutant, but is completely neccessary for the growth of green plants. To lessen its amount in our atmosphere would result in world-wide famine.


It would seem to me that most people, including many who hold PhDs in one science or another haven't had much learning in the way of the fundamentals of biology AND chemistry AND physics. I was taught in high school that which seems to puzzle a good many with PhDs these modern times.

"Just how stupid, how moronic are environmentalists?"

Now Alan, did you really need to ask that question??

I wish more people would take notice of what is going on.

@LarryOldtimer: PhD stands for 'piled high and deep'. These people know only how to deal in theory; they have absolutely not a clue about reality.