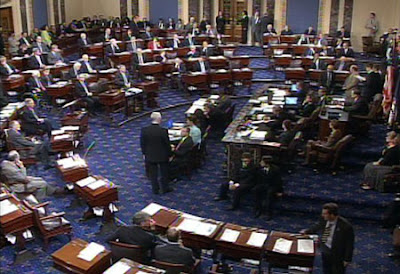 It struck me the other day that every time I see some member from the Senate on television that I am often looking at an elderly person. Recently, Sen. Rand Paul (R-KY) said, “I think the legislature is about ten years behind the public. I would argue that the Senate is not up to date with what the people want.”

There only a dozen Senators in their forties. The youngest Senator is Chris Murphy (D-CT) at age 39. In the House, the youngest is Patrick Murphy (D-FL) at age 29 who was elected in 2012. The average age of Senators, however, is now higher than in the past. 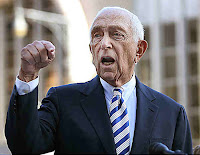 My home State of New Jersey has the distinction of being represented by Frank Lautenberg (D) who is 89 years old, the older member of the Senate. He was succeeded in age by the late Robert Byrd (D-WV) who was the longest serving Senator. Byrd died at age 93 in 2010 having served from 1953 to 2010. My most enduring memory of Sen. Byrd was watching him on C-SPAN in his final year, assisted by an aide seated beside him as the befuddled Senator struggled to speak from his chair and deal with the papers before him.

At age 75, I can testify to the toll that time takes on anyone reaching an advanced age, so the question of a Senate in which 21 members are in their 70s raises some questions about their ability to cope with the complex issues on which they must vote. I think the greatest problem that people of that age encounter is being out of touch with the present, particularly with all the advances in communications technologies that can be a challenge to those who may have mastered the typewriter, but now must adjust to computers, texting, tweeting, and other inventions that speed up the need to process an ever-growing torrent of information.

Many of the issues with which the Senate must engage relate to a very different era than the one in which older members were born and in which they grew up. Social issues, in particular, involve the current debates over same-sex marriage, illegal immigration, environmental and energy issues, to name just a few.

A recent article on Slate.com, “Democracy or Gerontocracy?” by Brian Palmer noted that “The 111th Congress, which took office in 2009, was the oldest in U.S. history, with an average age of 57 in the House and 53 in the Senate. The previous 112th was only slightly younger.” Historically, however, the average age in Congress “has remained within a rather small range since World War II” with the House aging more substantially than the Senate whose average age was 62 in 2011.

“Congress is decidedly older than the populace it represents” said Palmer, noting that “only ten percent of House members have been under the age of 40 in recent years. By comparison, 22 percent of the general population and 30 percent of registered voters are between 25 and 39 years old. The average American is more than 20 years younger than the person who represents him or her in the House.”

This brings me to the Millennials, also called Generation Y, born in the early 1980s to the early 2000s. Along with a previous generation, they are also known as “Generation Me.” There have been many surveys of the Millennials that indicate personality traits such as narcissism.

Millennials have distinctly different behaviors, values and attitudes from previous generations and much of this is due to technological and economic implications of the Internet. A survey by the University of Michigan’s Monitoring the Future, conducted continuously since 1975, and the American Freshman survey conducted by UCLA’s Higher Education Research Institute, reveal that the proportion of students who said being wealthy was very important to them increased from 45% for Baby Boomers to 70% for Generation X and 75% for Millennials.

By contrast, the percentage who said it was important to keep up to date with political affairs fell, from 50% for Boomers to 39% for Generation X and 35% for Millennials. Too many are clearly not paying as much attention these days than former generations. This may have been a factor in the election of Barack Obama in 2008 and again in 2012.

Maybe they should begin to pay more attention. A think tank called Generation Opportunity issues a Millennial Job Report for those aged 18 to 29. In February 2013, their unemployment rate was 12.5% and when you factor in the 1.7 million young adults that are not counted as “unemployed”, the rate rises to 16.2%. For African-American youth, it is 22.8% while Hispanics come in at 13.4%.

Millennials are in for sticker-shock when Obamacare goes active in 2014, but an estimated 11% to 13% have already migrated into the conservative political sphere, so there is hope.

The vast gap between those in Congress and the rest of the population is likely to have an impact on future elections and could result in younger members being elected. For now and for the foreseeable future, a much younger population is going to be victimized by the decisions of a much older Congress.

I realize that in *some* cases, with age and experience comes maturity and knowledge but many in those *hallowed halls* have shot that old axiom down... Youth doesn't guarantee any greatness either, but some of the youngsters DO seem to have the FIRE in them and are going great guns!

I can't knock elder statesmen, I am rapidly becoming an elder activist, and I have to tell you, this getting old stuff ain't for sissies...

It's a given that the GOP needs NEW blood, the *old guys* need to think about retiring, and that brings me to term limits, no one should make a career of being an elected official, NO ONE!

Sure, term limits could cause us to lose some experienced law makers but it can also remove those that are so ingrained at *feeding at the trough*...

All in all, change CAN be a good thing, as long as it's not the *change* Obama wants..

As usual, Fred, we are totally in synch.

It's interesting that the few blogs I read are mostly written by "old" people. It's a shame that the bloggers I read aren't in public office as they make a lot more sense than do those who make our laws.

Hugh, some of us get old in body, but remain young in mind and spirit. And, if one keeps learning all the time, your judgment improves with every book you read. So, yes, keep reading those old people. They know what they're talking about and know that history and politics tends to repeat itself.

I think it is way past time for term limits to all federal elected offices. 16 years max is a reasonable number. That's the only way we can get rid of people like Reid, Pelosi, Waters and Rangle.

But we also need to limit the extended benefits these law makers get. The retirement program for ALL federal employess is significantly out of touch with the private sector.

What George Orwell called "men with death heads showing through their skins"—close enough, I forget

@Bruce, I agree but doubt that politicians will ever vote for term limits.

@Retch: The problem for me is that some of us old folks still have our wits about us while others haven't changed their opinion since they were age 15.

Well, I hope to've still got my wits, such as they are—there's that to consider—in that skull showing through, hope the best about you, too. You're doing pretty well.

Alan, If politicians won't ever vote for term limits then the issue should be added to the ballots and let the people decide.

Those that haven't changed their opinions since they were 15 are a very big problem. I know my opinions have changed since I was an ignorant youth in college. I know a lot of people who haven't changed.

In short, these 1960's Hippy holdovers who have gamed the system and gerrymandered/bought their way into permanent seats of power will start dieing off en-masse leaving a (relatively) clean slate to start over with.
And this is a bad thing how?

Not to speak ill of the dead, but I realy saw the change in Congress when Ted Kennedy died. All of these Congressmen saw their own mortality staring them in the face. A legacy unfinished. Their names soon to be lost in the pages of history. This, more than anything else, is the driving source behind the Lefts insane grab at power for the past 5 years. Obamacare, Gun Control, Global Warming? Major jumps in Left Wing philosophy as they try to cement their names next to FDR and Woodrow Wilson in the pantheon of Government worship.