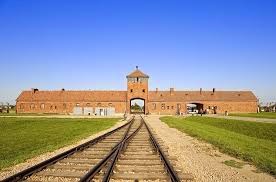 
There was some serious irony when U.S. Secretary of Treasury Jack Lew gathered together with French President Francois Hollande and a Russian delegation led by Sergei Ivanov, Putin’s chief of staff, along with leaders from Germany and Austria to participate in the January 27 ceremony commemorating the liberation of Auschwitz in 1945 by Russian troops.


I suspect that an entire generation or two born after that year, 70 years ago, may have little or no knowledge of what Auschwitz was. It was a Nazi death camp located in Oswiecim, Poland. Its full name was Auschwitz-Birkenau and it is estimated that one million people, mostly Jews, were killed there.


I say “irony” because Auschwitz-Birkenau was part of a system of six Nazi death camps that included Belzac, Chelmo, Majdanek, Sobibor and Treblinka. Each camp was filled with the victims of a widespread anti-Semitism that had existed in Europe for two thousand years, so it was not difficult for the Germans to turn a blind eye or the French and others to provide assistance in rounding up their Jews.

The camps engaged in large scale murder to fulfil Adolf Hitler’s intention to exterminate every Jew in Europe. In 1933 there had been nine million living in 21 nations that would be occupied during World War II. By 1945, two out of every three European Jews had been killed.


In addition to the Jews, an estimated five million others deemed enemies of the state for political or other reasons such as being Communists, trade unionists, gypsies or homosexuals also died in the camps.


What is rarely acknowledged is that the Europeans of that era were largely educated, had a rich culture of music, literature, and drama, and many were church-goers. In short, you would not have been able to tell them apart from the Europeans of today.


The Nazis wrote the book on the use of terrorism to facilitate their barbaric, murderous theology of death. The Muslims that have moved to Europe have adapted it to their own ends, seeking like the Nazis to become globally dominant. They don’t have death camps—yet—but the widespread and constant slaughter in which they are engaged has a similar feel to it.


In the 1930s those European Jews had few places to which to flee. They were not even that welcome in America where anti-Semitism was widespread. Those that could did emigrate and, again there is irony because several of the German physicists that came to the U.S. were instrumental in the creation of the atomic bomb that ended World War II while others played roles in the Nazi’s defeat during the war. One such emigrant, Albert Einstein, was the first to suggest the creation of the weapon to Franklin Roosevelt.


In response to European anti-Semitism, a movement called Zionism had begun before World War II with the intention of reestablishing Israel as a Jewish state where Jews could be safe. The movement was founded by Theodor Herzl in 1896. Here again there is irony because the movement was dominated by secular Jews who were not motivated by Jewish history or the Torah. What they wanted was to be free of the oppressive antipathy of the nations in which they lived. What they were seeking was emancipation.


By the time World War II occurred they were a force to be recognized in Israel, known at the time as the Palestinian Mandate and run by the British who, as often as not, shared the anti-Semitism that had given life to the Zionist movement. It would take the Holocaust to accelerate the movement of Europe’s surviving Jews to Israel which in 1948 declared its sovereignty and was immediately attacked by the Muslim nations surrounding it.


Fast forward to our times and the Jews of Israel as well as those around the world know one truth. If Iran is permitted to reach a point where it can create its own nuclear weapons and put them on their missiles, Israel will only be minutes away from an extermination that the Iranian leadership and the other Muslim nations of the Middle East have openly called for since Israel came into being and the Islamic Revolution took control of Iran in 1979.


This time, however, the same nuclear weapons that would destroy Israel would also be turned on the United States because the shouts of “Death to America. Death to Israel” are a part of the daily lives of the Iranians, as well as others in the region.


One can only pray that seventy years hence some other writer will not be commenting on the second great annihilation of the Jews, literally within the lifetime of people who were alive during the first one. I am one of those people and Auschwitz is not some place that existed a long time ago. It was yesterday.

The ONLY thing that stops the Obama regime from doing similar is the armed American, and he and his cohorts are trying desperately to disarm us... Come and take it! Bullets first...

Those days of innocent boyhood seem like yesterday for me too, Alan. I didn't know and certainly did not understand about the holocaust until I was in my late twenties. My University classes certainly did not impress me with the facts, nor was it a topic of conversation. Anywhere at any time. Antisemitism has never left the heart of these United States. We can talk about it all we want, but there is a curious and even Biblical hatred of the Jews and their role in the history of the world. The Scriptures state in Genesis, of Abraham,
"2 I will make you a great nation; I will bless you And make your name great; And you shall be a blessing.
3 I will bless those who bless you, And I will curse him who curses you...”
We need to be aware of the second part of verse three.

First you have to stop having a Muslim for a president.
He has made his preferences well known. He was raised as a Muslim.
He thinks and acts like a Muslim.
The religion of peace?
Sure - once all those who are not Muslims, or the right kind of Muslim are dead.
Even then they will still be stoning adulterers, chopping limbs off thieves etc. Peace? Give me break.

Gaidar's history of civilization written for the newly freed-from-communism Russians before the author died probably nailed the problem in his dissertation on the Middle East. Islam forbids money lending for profit. Hyperinflation in Germany after WWI devastated everyone, destroying the middle class and creating starving children. Who were the bankers? The New Testament is often misinterpreted, as Christ was admonishing the moneylenders not from their practice but of using God's Temple for their activity.
The NAZIs were atheists, not Christians. The two women I've known who married GIs to escape after the war both were atheists. Neither cared about her husband, but saw him as a means to a life of ease.