I have a theory that ties in with John Boehner’s third election as Speaker of the House on Tuesday.

Could it be that the newly elected congressmen and women are greeted by one of the members who has been there long enough to be the chairperson of one of the many committees of the House and quickly informed that they now belong to a very exclusive group in which they can, with relative safety, ignore the voters who just elected them?

In the House there were 58 freshman members and in the Senate, there were 13, some of whom were formerly members of the House. In total, the opening session of Congress welcomed 246 Republicans and 188 Democrats.

Those contesting for the job of Speaker in addition to Boehner were Reps. Ted Yoho and Daniel Webster of Florida and Louie Gohmert of Texas. The Democrats nominated Rep. Nancy Pelosi. Four Democrats did not vote for her. Meanwhile Webster received 12 votes, Gohmert earned three, and Yoho won 2. Of the 408 votes cast, Boehner won 216.

My other theory is that enough members of the House had concluded that Boehner had done as good a job as possible under the circumstances and saw no reason to turn the job of Speaker over to someone who might rock the boat. His opposition came mostly from the strongly conservative bloc in the House.

What we likely have in the 114th Congress is a very pragmatic leadership who are not likely to do anything dramatic regarding immigration, energy, or any of the other issues about which conservatives want action. In both the House and the Senate, they know what they are up against. They will put forward legislation, but all it will do is demonstrate what we already know about Obama.

In his first speech on the floor of the Senate, Mitch McConnell (KY-R), the Majority Leader, said “Bipartisan compromise may not come easily for the President. The President’s supporters are pressing for militancy these days, not compromise.” Those supporters are the Far Left. I doubt that he or John Boehner met with the President that much over the past six years.

The Founding Fathers created a republic in which the business of legislating was intended to move slowly, subject to debate and the need for compromise. Obama has made it clear he has no intention to work with Congress, especially now that it is controlled by the GOP. So gridlock will continue and conservatives will stay angry.

Regarding my theory that our political class doesn’t really worry that much about what the voters want, do you recall the omnibus budget that was passed in the last hours of the previous Congress? That was 2,000-plus pages crammed full of things we are not likely to ever learn about until well after the money is spent. Does that suggest that the members of Congress think it wiser to keep us in the dark? Yes.

Think of it another way, Over the course of the last six years with Obama as President, the House passed some fifty resolutions calling for the repeal of ObamaCare. Were we supposed to take that seriously? Are we going to see legislation repealing, for instance, Obamacare’s medical device tax? Maybe. I will be very interested to see any legislation aimed at undermining ObamaCare because I believe the 114th Congress would prefer to wait for the courts to do that for them.

Boehner knew early on that Obama was a President who had little regard for Congress or, for that matter, the Constitution. 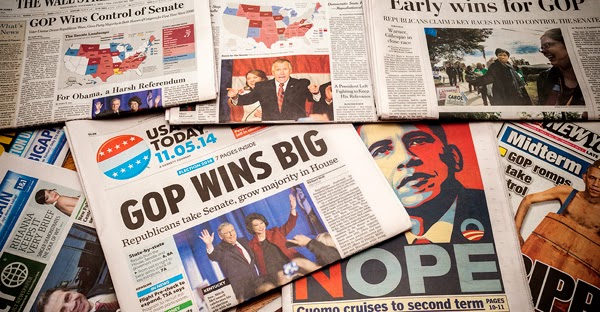 Despite a major rejection of the Democratic Party and Obama’s policies in the 2013 midterm elections, Obama has been acting as if the Party won those elections and they had confirmed his agenda. He has let it be known he has no intention of negotiating, preferring to use his veto power, unilateral executive orders, and to get what he wants via various federal agency regulations.

One of the most important functions of the 114th Congress will be oversight of departments and agencies. Has anyone heard from the Justice Department’s Lois Lerner lately? Any word about the Benghazi tragedy?

Little wonder that, after being elected to his third term as Speaker, Boehner said “All I ask is that we disagree without being disagreeable.” There are 435 members in the House of Representatives and Boehner is responsible primarily for its Republican members. If there are Democrats who are willing to cross the aisle, he will welcome their votes. As in the Senate, they will be needed on occasion.

Regarding the passage of legislation, Boehner said “It’s the real work. It’s a grind. The battle of ideas never ends and frankly never should. We Americans never quit,” adding “Let’s once and for all prove the skeptics wrong.”

It is worth keeping in mind, as Karl Rove reminded us in a Jan 7 commentary, "Every Republican senator and virtually every congressman challenged as insufficiently conservative won their primaries." The voters have spoken.

As unhappy as many conservatives are with Boehner and those they call RINOs (Republicans in Name Only), Boehner did not sound like a man expressing great joy at having been reelected to what appears to be a very difficult job. That this is his third term suggests that his colleagues in the House have a measure of respect for him that his critics do not.

The House and Senate used to be exclusively an old white man’s club. Now the Speaker and the Senate Majority Leader are looking at an extraordinarily diverse membership.

The same day Boehner was reelected Speaker the Congressional Black Caucus hosted a swearing-in ceremony to welcome new and returning members of the House and Senate. There were 46 of them.

Rep. Mia Love (R-Utah) will make history as the first black Republican woman in Congress. She and the others represent the largest Black Republican class in Congress since the Reconstruction era. Makes you wonder what those blacks rioting in the streets are so angry about? More than 125 blacks have been elected to Congress over the past forty years, including of course, Barack Obama.

The 114th Congress has been hailed by The Hill as the “Most diverse Congress in history to take power.” There are a record number of female lawmakers at 104, alongside 420 men. Hispanic lawmakers will number 33 with 30 in the House and Sen. Mazie Hirono (D-Hawaii) in the Senate. There are 12 Asian-Americans and Oklahoma has contributed two Native-Americans.

The Hill reports that “A vast majority of lawmakers identify as Christian, either Protestant or Catholic, along with 16 Mormons.” There are 28 Jews, two Buddhists, two Muslims, and one Hindu.

Think you’d like to have John Boehner’s job or Mitch McConnell’s? To all that diversity add political points of view that range from Far Left to Far Right.

Let me return to my original theory. In the House, though they must face election every two years, I suspect they quickly conclude that there is no satisfying the voters so they might as well vote as they wish. In the Senate where they face election every six years, that goes double or triple.

These are professional politicians. Of the new Congress, ten have been governors, 32 were mayors, and 251 served in state legislatures. It’s a job they have chosen and, frankly, I am glad it is them, not me.

Alan, we need term limits for every federal office. The positions were never meant as permanent jobs.

The Mainstream GOP made it very clear a while back; they insisted that if TEA Party candidates were elected, once they got to Washington they would immediately be co-opted into the GOP proper and thus rendered harmless. I guess this is one time the GOP told the whole truth.

Thanks for reminding us of the vast divisions in the country. It seems nothing has changed from the beginning of the US. I inherited a book from my mother published in 1960 that details the Federalist Era of Washington and Adams presidencies.
Fighting for power was the driving force then, as it is now. Issues are different, but the vast chasm between power-seekers and the average citizen are the same.