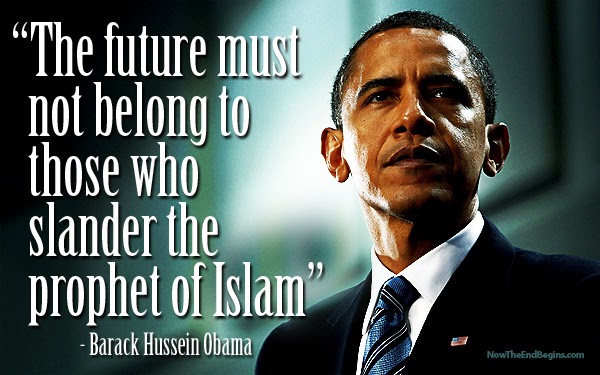 
The news from Paris about the killing of twelve journalists highlights Islam's war on the West that represents a fundamental truth about this cult of Mohammad.


Most are familiar with the Islamic schism between the majority Sunnis and the minority Shiites. It dates back to the very earliest days of Islam when the two groups disagreed over who should be the successor to Mohammad.


There is a new schism in Islam these days and it is between a moderate interpretation of Islam and fundamentalism. We have all seen what fundamentalism produces.


The past year had dramatic and tragic slaughters by the Islamic State (ISIS) in the Syrian-Iraqi area they control, the murder of more than 140 school children in Pakistan by the Taliban, and the kidnapping of 276 girls by Boko Haram in Nigeria. These acts represent a strict interpretation of Shia law based on the Koran.


That is why an address by Egyptian President, Abdel Fattah al-Sisi, on New Year’s Day to clerics at Al-Azhar and the Awqaf Ministry is particularly significant. As reported by Raymond Ibrahim of the Middle East Forum, Sisi “a vocal supporter for a renewed vision of Islam, made what must be his most forceful and impassioned plea to date.”


His speech was a warning that “the corpus of (Islamic) texts and ideas that we have made sacred over the years” are “antagonizing the entire world.”


Referring to the 1.6 billion Muslims, Sisi said it is not possible that they “should want to kill the rest of the world’s inhabitants—that is 7 billion—so that they themselves may live.” Islam, said Sisi “is being torn, it is being destroyed, it is being lost—and it is being lost by our own hands.”


I cannot recall any other Islamic leader saying anything this bold and this true. Directly addressing the clerics, Sisi said “It’s inconceivable that the thinking that we hold most sacred should cause the entire umma (Islamic world) to be a source of anxiety, danger, killing and destruction for the rest of the world.” That is, of course, exactly what has been occurring.


Sisi called for “a religious revolution”, what Christians would call a reformation. “You, imams, are responsible before Allah. The entire world is waiting for your next move…”


Based on negotiations led by the U.S., the world is waiting to see what Iran, the home of the Islamic Revolution—the name given to the ayatollah’s movement that overthrew the Shah in 1979—will do in the face of demands that it cease its quest to produce its own nuclear weapons.


You don’t have to be a U.S. diplomat to know the answer to that. As Behnam Ben Taleblu of the Foundation for Defense of Democracies recently wrote, for decades the Iranian leadership has referred to “American Islam”, a term that describes what Iran “perceives to be a depoliticized perversion of the true faith, devoid of the revolutionary sentiment that guides the Islamic Republic.” Calling it “American” demonstrates their contempt for everything American.


The Iranians even apply the term to Muslim nations “deemed pliant before the will of superpowers like the United States.” In their view, they are the champions of “the pure Islam of Mohammad.” The Iranians are Shiites. As such, they are a minority sect within Islam, though a large one by any standard.


Those U.S. diplomats negotiating to get Iran to agree to cease pursuing the ability to construct their own nuclear weapons should read the memoirs of Mohammad Javad Zarif, Iran’s foreign minister and lead nuclear negotiator. As Taleblu notes, Zarif has a PhD from an American university, but he still wrote “We have a fundamental problem with the West and especially with America. This is because we are claimants of a mission, which has a global dimension.”


That mission is to impose Islam—their fundamental brand of it—on the entire world. That would get easier if they can threaten the world with nuclear weapons. Iran has been the leading sponsor of Islamic terror since its revolution in 1979.


The gap between Egyptian President Sisi’s concerns about the state of Islam today and the intention of fundamentalists like Zarif are a capsule version of what is occurring among Muslims throughout the world.

The US's policy of 'mutually assured nuclear destruction' worked with the USSR. Not all Iranians are radicals, as those who came here for engineering studies funded by the shah were fun-loving, moral people who identified more as Persians. My coworkers who traveled to Iran as part of the shah's modernization efforts said there were people on the street who were injuring themselves, whipping themselves, etc....I thought the change in Iran was an example of what sociologists call 'culture shock'. Going from prehistoric tribes to the modern world might be an example...My neighbor who went to Afghanistan a couple of years ago as an agricultural expert to help the farmers reported those he assisted were using stone-age tools. His wife sent shovels to him so they could dig irrigation ditches for their orchards. They treasured the shovels and said he was the first person to help them. However, the tribes from the hills regularly came down and stole/plundered the farms he helped....A page out of pre-history.

It is not the Iranian people I fear, but the leadership who have never ceased to express their hatred of America.

As for Afghanistan, it remains culturally in the Middle Ages even if it has modern buildings, etc.