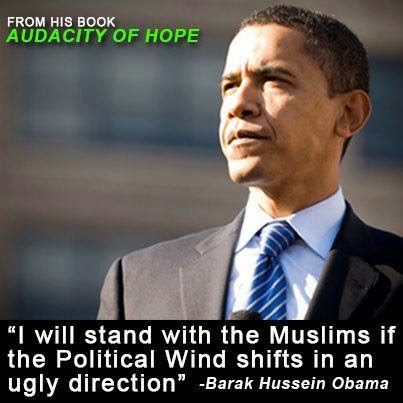 
No, I cannot prove that Barack Obama is a Muslim, but a review of his public life from the days he was campaigning to be an Illinois Senator through his years as President have raised a lot of questions, including a notable slip of the tongue during a television interview when he referred to himself as a Muslim.


During an interview with George Stephanopoulus, Obama said “John McCain has not talked about my Muslim faith” and Stephanopoulus, a former member of the Clinton administration, was quick to suggest to Obama that he meant to say his “Christian faith.”  Oops.


Not that Obama has made a secret of the fact that his father was a Muslim or that his step-father was as well. In his youth when Obama lived in Indonesia he attended a Muslim madras, a school devoted to the faith. He has referred to the Muslim call to prayer as “one of the prettiest sounds on Earth at sunset.” Indeed, he has recited its opening lines with a perfect Arabic accent saying “Allah is supreme…I witness that there is no god but Allah…”


Obama surprised a lot of people when in London on April 9, 2009 he bowed deeply to the Saudi monarch, regarded as the protector of Mecca and Medina, Islam’s two holy cities. No President had ever bowed in that manner to a foreign potentate.


Observers have pointed out that his wife, Michelle, does not accompany him to Muslim nations because Sharia law would require her to wear a head covering as the wife of a Muslim man in a Muslim nation. Others have noted that Muslims are forbidden to wear jewelry during Ramadan and during that Islamic holy month he has never been seen wearing his wedding ring or watch.


Obama did not travel to Israel during his first term as President. It was not until March 2013 that he visited Israel and he has consistently displayed a lack of sympathy, if not enmity, toward Israel during both terms, opposing the construction of Israeli housing and suggesting it return to its 1967 borders, echoing the complaints and demands of Palestinians and others.


It is true that Obama attended a Chicago church led by Rev. Jeremiah Wright who, in an interview, said that Obama “was steeped in Islam when he first met him” and that he “made it comfortable “ for Obama to accept Christianity without have to renounce his Islamic background. When Rev. Wright and his church became controversial in 2008, Obama publicly left it. Joining the church was, in his words, related to the fact that he was doing community organizing, often in Chicago churches, thus making a church membership a useful attribute.


If there is a baptism certificate for Obama, it remains sealed from public view along with many comparable documents such as a certified copy of his original birth certificate. The one put forth by the White House has been debunked as a fraud by many document experts.
An Associated Press article was published on June 27, 2004 in the Kenyan Standard Times reporting that “Kenyan-born U.S. Senate hopeful, Barack Obama, appeared set to take over the Illinois Senate seat after his main rival, Jack Ryan, dropped out of the race on Friday night amid a furor over lurid sex club allegations.” During and after the campaign Obama did not deny having been born in Kenya until August 28, 2006 when his staff began to say he was born in Hawaii.


Allen B.West, a former member of Congress and a columnist, has written ”President Obama just cannot bring himself to say Islamist, jihadist, Islamic terrorism — nothing. It is still this Obama administration which classifies the Islamic jihadist attack at Ft. Hood Texas, and the barbaric beheading of an American woman in Moore Oklahoma, both as “workplace violence.”


The events in France, the beheadings of Americans by the Islamic State, and comparable events have begun to arouse interest and concern over whether the President is in fact a Muslim.

There is an Islamic doctrine known as “taqiyya” that permits Muslims to deny they are Muslim if it would be dangerous not to or to knowingly deceive infidels.


Despite the two wars, Iraq and Afghanistan, in which the U.S. has sacrificed lives and money, Obama has pursued a policy of withdrawing our military presence, despite the fact that we have maintained our presence, for example, in South Korea since the 1950s and in Europe from the end of World War II. The result of the withdrawal from Iraq gave rise to the Islamic State and it is feared that a similar Taliban insurgency will begin as Afghanistan is left with too few military assets.


Has it been lost on anyone that releasing terrorist prisoners, taken on the battlefield, from Guantanamo has resulted in an estimated third of them returning to the battlefield? He returned five top terrorist leaders from Afghanistan in return for an American soldier deemed to have been a deserter. He has made no secret of his desire to close down the facility.


I hope that future historians don’t look back at our present time and conclude it was the worst of times to have a President so ardently devoted to Islam or a legion of other world leaders and media folk who refuse to identify the enemy as Muslim terrorists.


No other American President has ever been so partial to Islam and Muslims as Obama and it is not beyond the reach of logic or the imagination that he too is a Muslim.

My personal Obama theory is that he's a first, last and always a psychopath who has clothed himself in various ideologies and religions to advance his own personal agenda.

Of course he's a Muslim, his own words give that away, always have, and the American people are too blind to see it or understand it...

One thing for sure. If Obama is a Christian, he's the worst one who ever lived.

If you haven't scoped Obama with me yet you don't know what you're missing, totally free:

I pray to the real God Almighty that America survives the disease that has infected our White House.

I am confident, Elton, that America will survive. It will likely take years to undo the damage. The GOP controlled Congress is the first step in the right direction.

In my personal view, there is no doubt that Obama is a Muslim. None whatsoever. There are simply too many pieces of empirical evidence suggesting so.