The Future is Arriving Faster Than Ever 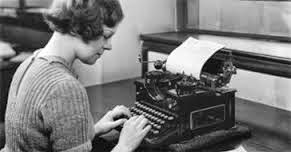 
On the last day of 2014 I received a lapel pin from the Society of Professional Journalists in honor of my having been a member since 1979, thirty-five years ago. I confess I was a little stunned to think I had been an editor and reporter that long ago. Indeed, I had been one for several years even before I joined the Society.


I doubt that today’s generation of young journalists have ever used a manual typewriter nor know what it feels like to hold the pieces of metal that a linotype machine created to make a column of newsprint.


In theory journalism still has the same objectives; to get the facts and tell the story as objectively as possible.

Today, however, journalism has become far more subjective and the issue of bias blazes off the pages and from the television screen in terms of the selection of the events that are reported and the facts selected to be the news.


There is an old saying in newsrooms that reporters are liberal and editors are conservative, but these days much of what appears on editorial pages and in the print and broadcast news is a blatant liberal interpretation of what is or is not news.


This old journalist cannot escape the feeling that what we are reading much of the time is little more than a government press release handout. Sadly, I think we are witnessing a significant reduction of investigative journalism in the mainstream media. Fortunately that void is filled in these days by Internet sites that focus on various elements of the news occurring in the nation and the world.
It was not, for example, a journalist who discovered the truth about Jonathan Gruber and his role in creating ObamaCare. He's now famous for calling voters "stupid."

These days, according to the Pew Research Journalism Project, “Even at a time of fragmenting media use, television remains the dominant way that Americans get news at home, according to a (2013) Pew Research Center analysis of Nielsen data. And while the largest audiences tune into local and network broadcast news, it is national cable news that commands the most attention from its viewers.”

I suspect that the many new communications technologies will be the means by which people will get their news from ipads and similar devices. I feel positively ancient when I open the print edition of The Wall Street Journal, but I wouldn’t want to read it any other way. The same applies to reading a book.
In his 1970 book, “Future Shock”, Alvin Toffler warned that by the year 2000, technological advance would come so fast that they will actually make people’s lives more complex, not less. He called it “information overload” saying “Millions of ordinary, psychologically normal people will face an abrupt collision with the future, which will lead to distorted perceptions of reality, confusion, and fatigue.”
Now ask yourself if you’ve become accustomed to people walking down the sidewalk apparently talking out loud to themselves when in fact they are on a cell phone? Indeed, I rarely get in an elevator or go anywhere without seeing people who are looking at a device in their hand with which they are checking their email or conversing with someone. They are, however, literally cut off from any inter-relation with anyone around them, often oblivious to what is occurring.
Think now of how many passwords, remote controls, onboard navigation systems, and Internet search engines with which you interact every day. These are all relatively new technology even though they may seem to have always existed to millennials and younger folk.
Another futurist, R. Buckminster Fuller, an American philosopher and architect—inventor of the geodesic dome—predicted that by the year 2000, the world would have figured out how to eliminate poverty and hunger. We have made great progress with regard to growing abundant crops, but of course those who hate and fear any new way to benefit society are presently campaigning against genetically modified crops (GMOs). They are safe but many large food providers like McDonald’s are giving into the pressure from groups who claim they pose a health threat. They do not. Demands that GMO elements be listed on product labels are part of a despicable campaign against this extraordinary agricultural technology that enhances, protects, and increases crops.
As for poverty, Fuller’s prediction did not come true. The future that has arrived since he made the prediction requires a higher level of education for most jobs and computer skills to perform them. If you’re poor, you face an immediate obstacle trying to learn how to operate and own a computer.
At the same time, robots have replaced workers such as bank tellers. When I call customer service these days, I generally end up talking to a machine. Isaac Asimov, one of the 20th century’s most highly regarded science fiction writers, predicted in 1942 that robots would be so ubiquitous that he proposed “Three Laws of Robotics.” The prime law was that a robot may not injure a human being or, through inaction, allow a human being come to harm. We haven’t quite reached the point Asimov envisioned, but we are getting there.
In terms of how new technologies have occurred in my lifetime, it is fair to say that the future is arriving even more swiftly than it did in the past.

My Mother who at age 98 had lived through virtually the entire last century recalled how amazed she was when a box with earphones was her introduction to the first radio. Born in 1903 when the first Wright Brothers plane flight occurred, she lived to see men rocket to the Moon and airplane travel largely replace trains. 1903 was also the year Henry Ford founded his company and five years later began to roll out the first Model T.  Affordable automobiles transformed American society.
Since we live in an era of change we are often unaware of how greatly the newest technology will affect our lives, but we know we want to have it and use it. That is why, if I may return to my starting point, it is ever more essential that the news that journalists provide is even more important to our lives in terms of how accurately they report the changes affecting it.
Alan Caruba, 2015
Posted by Alan Caruba at 8:02 AM

Change is good, I embrace change and I try to learn something new every day, and I find myself learning a great deal of it from YOU Alan...

Thank you Sir, for being my friend and for just being there and being you!

I am blessed to have you among my personal friends. Here's a wish for a happy and healthy 2015.

Thanks for your blog; I read it just about every day and treasure your insight. Here's hoping that 2015 brings blessings to you and yours.
Marshall McLuhan was uncanny in his accurate predictions pertaining to the new electronic age of information. We are now in the 'global village' and some of his predictions of positives are increasingly happening. Distance is no longer relative freeing people to live outside of cities. It is revolutionizing education, shopping, stock market participation, etc. The old 19th century school is obsolete, as more and more people turn to such alternatives as home schools with lots of online support from such endeavors as the Khan Academy. Every child can finally learn at his own pace and through his own unique style of learning. The decentralization is unique in the past 300 years where people HAD to move to urban areas for everything. We don't have to depend upon the New York Pravda for news, and this is unique in my lifetime. I think of the internet as our glasnost.

Good points. Glad you enjoy my commentaries. And yes, change does seem to be happening faster and I think for the better.