The Blizzard That Wasn't 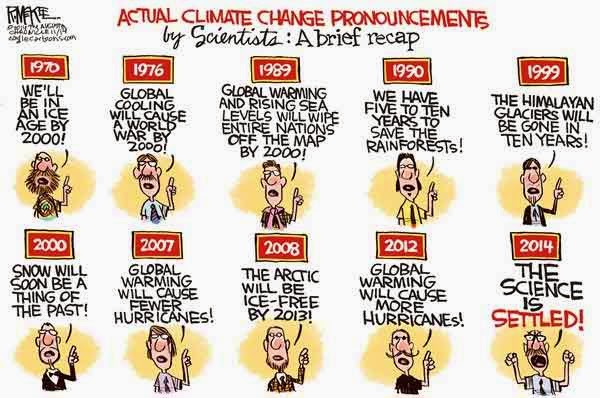 
There was no climate change where I live in a suburb of Newark, N.J. if by “climate change” you meant a dramatic blizzard with high winds and several feet of snow. It’s winter and you get the occasional, rare blizzard every few years, but more often you get snowstorms. That’s not “change” by any definition.


Listening to WABC radio follow events with callers from around the Tri-State area calling in with far more accurate reports than the meteorologists was an education in the way those trained in meteorology and the rest of us have been conditioned to believe that something is happening to planet Earth that, quite simply, is not happening.


The meteorologists spent their time trying to figure out the difference between a European computer model and one generated here in the U.S. The former predicted far worse conditions. The latter fell victim, along with the rest of us, to the mindset that the conditions the computers were interpreting did not reflect what was actually happening.


At this early morning hour, it is clear that Long Island, parts of Connecticut, and generally along the coastlines, there has been a heavier snowfall. A few miles inland however it is a far different story. Callers who had been out in the midst of the storm described light, powdery snow and perhaps two to four inches at most.


Why, they asked, did the Governors of New York and New Jersey, along with the Mayor of New York City close down the metropolitan area? They speculated on the millions of lost income for everyone involved in a storm that was not posing a significant traffic or other problems, but who had seen businesses, schools, bus lines, and other public facilities shut down. When a significantly incorrect weather prediction does that, it demonstrates how important it is to correctly interpret the data being provided by the satellites—the best source.


When, earlier in January, NOAA and NASA reported that 2014 had been "the warmest year" it should have raised far more questions and media coverage given the sheer absurdity of such a report. Remember, though, these are two federal government agencies we expect to get it right. They didn’t just get it wrong, skeptical scientists were quick to note how they had deliberately distorted the data on which they based the claim.


That is the heart of the issue surrounding the endless claims of “global warming” or “climate change.”  The planet has not been warming for 19 years at this point because the sun has been in a perfectly natural cycle of low radiation.
Centuries ago, it was noticed that when there are few sunspots, magnetic storms, the Earth got colder. Thus, “climate change” is not an unusual event, but rather a reflection of the well-known cycles of warmth or cold that the planet has passed through for billions of years.


At this writing it is too early in the morning hours to know what the rest of the East Coast looks like, but the indications are that, as one moves westward the “blizzard” has been far less than the one predicted and will likely be downgraded to a standard winter snowstorm.


That’s the good news. The bad news was the over-reaction of meteorologists and politicians. No doubt they wanted to be “safe than sorry” but they inadvertently taught us all a lesson about the way environmental organizations and a government led by a President telling us that “climate change” is the most dangerous challenge facing us have been deliberately lying about the true meteorological record in order to drag us all back to a time in which we burned wood for heat and rode horses for transportation.
The Greens don’t like humans much and that is why they have been lying about “man-made” climate change when the climate has nothing to do with human activities.


Listen to the skeptics, often maliciously called “deniers”, when they tell you the truth about the meteorological science that has been deliberately distorted since the United Nations established the Intergovernmental Panel on Climate Change in 1988. It has been lying to us ever since.


Depending on where you live in the area in which the snow fell and the winds blew, trust your eyes. Trust your commonsense. Be more skeptical because the blizzard that wasn’t is not a lesson you want to forget anytime soon.

Meanwhile, it was a balmy 72° here in Rowlett today with 78° predicted for tomorrow, but cold, mid 30's later in the week and rain over the weekend...

It's called WEATHER and the GloBull warming nuts just don't get it...