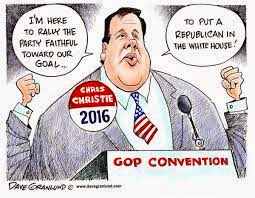 
I was born, raised and have lived in New Jersey most of my life. That does not, however, make me an expert on Chris Christie, our Governor and currently one of the contenders for the Republican nomination to run for President in 2016.
His major claim to fame is that he has been twice elected in a very Democratic state and has had to deal with a very Democratic legislature. What is rarely mentioned is that the way he has done this is to issue several hundred vetoes to a point where, if the Democrats want anything passed, they have to make sure he likes it. This is also not to say that they haven’t worked with him to rein in the public service unions and address pension reform. To his credit he has vetoed countless liberal measures from gay marriage to a ban on hog gestation crates.
That said, New Jersey still has lots of taxes, lots of regulations, and lots of people who retire and move to Florida. It also, so I am told, has an “attitude.” Texans may say “Don’t mess with Texas”, but in New Jersey we don’t even have to issue such a warning. It is, after all, the home of the fictional Tony Soprano of HBO fame. In truth, it is a place filled with friendly, happy people, so long as you mind your manners.
In a curious fashion, Chris Christie embodies that attitude. He is a skilled orator when he wants to be. As a former U.S. Attorney he “made his bones” by putting a lot of Mafia guys in jail and doing the same for some high ranked Garden State politicians. That was so refreshing the voters decided to elect him Governor. In 2013 he was re-elected with 60% of the vote.
In the wake of 2012’s Hurricane Sandy, Christie’s embrace of President Obama when he came to New Jersey for a photo op caused a lot of Republicans to criticize him, but Christie was being a political pragmatist, knowing that the state was going to need a lot of federal funding to help rebuild from the devastation that had incurred. Even so, he has not been forgiven for it.
The Democrats have been desperate to find something that would reduce his popularity and “Bridgegate” became the vehicle when one of his staff stupidly messed with the traffic to the George Washington Bridge, presumably for political reasons. He called a press conference and for more than an hour answered every question he was asked, denying any personal knowledge and participation. The staffer was fired.
Despite that, the non-event was engineered to fester through lengthy legislative investigations that proved he was telling the truth. In addition, Christie has faced a largely hostile state press, led by the largest daily, the Star-Ledger that pathetically derides him in some fashion in every issue, usually on page one.
Beyond New Jersey I suspect that few voters really have any idea who he is despite his efforts to fashion the national recognition he will need to have a shot at the GOP nomination. Unlike Wisconsin Governor Scott Walker whose reputation is based on his solid conservative values in a largely liberal state, Christie is mostly known for his public personality; entertaining, but combative.
For hardcore conservatives, Christie is not conservative enough even though he is pro-life, against assisted suicide, and opposed to equal-pay laws, et cetera. He did secure a property-tax cap, but was unable to get the Democratic legislature to cut income tax rates. He has been criticized on Second Amendment issues favoring a ban on concealed carry and limits on ammunition magazines from 15 to ten bullets. Significantly, he vetoed a state exchange to implement ObamaCare.
Christie is now a national political celebrity and proceeding with a campaign to be the Party’s nominee. We shall see his name among the polls as his rankings rise or fall. That doesn’t mean voters have any real idea who he is or what he stands for.
That was the theme of Wall Street Journal columnist, Kimberly A. Strassel’s “What’s the Big Idea, Christie?” on February 5. She opined that “His best shot is therefore to look forward and wow conservatives with a full-throated economic and tax-reform agenda—especially since nobody has much of an idea what a Christie agenda would encompass.”
“Conservatives are vaguely aware that he has done useful things in the Garden State. Some like his style. But they also know he’s from, well, New Jersey, and that’s made them open to rumors they’ve heard about his positions on climate change, gun control, and social issues. Some wonder if he’s a big-business, Northeast Republican.”
Politically I think the nation has been moving more into the conservative political zone and we can thank President Obama for that, but Strassel is right when she says Christie has to select a few major issues and hammer them to gain the kind of support he will need to secure the nomination.
As Strassel notes “The measure of a Christie run won’t be whether he can outtalk or outglitter his putative Republican primary competitors. It will come entirely down to whether he can outmatch them on substance.”
I like him, but I don’t think that’s going to happen.

So far, only one potential candidate has taken the time to draft solutions to problems most polls have shown to be a major concern of citizens. Bobby Jindal has a plan to reform health care via more free market solutions and is planning the same for education. Maybe Jindal and Christie could team up. Bush is just a retread of the RINO brand, and his brother escalated big government during his 8 years.

He can't win the nomination or the election. I've followed Christie for a long time. Here's what he brings to the table for Republican candidates. When the press gets snotty and smarmy - in that all too innocent by half way they have - he will smack them right up along the sides of their heads. That will give the others the guts to follow suit. Beat the press and win the nomination and the election – unless you’re Christie. No matter what good he's done he's wrong on the biggest issue - global warming.

Most don't seem to grasp what that whole issue really entails. It's a blatant attempt to destroy the U.S. Constitution by destroying the American economy and set up a world government under the U.N. Even Jacque Chirac acknowledged that.

If you’re wrong on global warming you’re not right….period! That’s another area Walker needs to re-address by the way, if he already hasn’t.