The Right to Say No 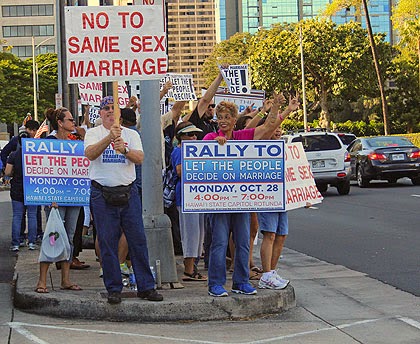 
Something very unpleasant is occurring in America. Those who have a strong religious faith are being denied the right to say “no” based on its teachings and values. This is particularly true these days as homosexuals, barely three percent of the population, demand that they be accommodated when their demand runs counter to thousands of years of what has been deemed moral behavior and, for many, still is.


When it comes to marriage. Gays insist they have a “right” to get married and call their union “marriage”, but there is absolutely nothing in the thousands of years of the Judeo-Christian ethic that defines same-sex unions as either moral or legal.


The most recent and egregious example of what can happen when someone obeys God rather than the state is Arlene’s Flowers, a small floral shop in Richland, Washington. Its owner, Barronelle Stuzman, declined to make flower arrangements for a gay couple’s wedding and, instead of finding a shop that would, they took their grievance to court. A judge ruled Ms. Stutzman violated the state’s anti-discrimination and consumer protection laws.


I find it odd that one cannot refuse to render a service or sell a product if that decision is based on one’s religious beliefs. Isn’t that a form of discrimination against religion? Yes, it is.


Commenting on these increasing cases filed by homosexuals, the noted conservative writer, Selwyn Duke, said “It is a new front in the war on faith, legitimate freedom and private property rights. Many point out that it constitutes an unprecedented trampling of religious liberty and this is true.”


America is a nation based on its Founder’s beliefs that the rights of its citizens came from God, not the state. Something is very wrong when judges ignore that fundamental truth.


Anti-discrimination laws have the intent of ensuring the right of people to be treated equally. Not all such laws are the same. Some permit exemptions based on religion or gender. The reality that women are different from men has seen some nations such as ours exclude them from serving in a frontline combat role or aboard submarines. This is a concession to reality.


Ms. Stuzman’s new reality, after forty years in business, is the loss of her business due to the fines that have been assessed, along with the cost of legal fees. “They want my home, they want my business, they want my personal finances as an example for other people to be quiet,” said Ms. Stuzman. The gay couple may love each other, but they have demonstrated their belief in their right to marry permits them to inflict an enormous harm on a 70-year-old florist. There is something truly obscene about that.


In August of last year, a same-sex couple from Newark requested the use of the Liberty Ridge Farm for their wedding ceremony and was denied. In order to comply with a court order that they make their farm available despite their religious convictions, Cynthia and Robert Gifford, the owners of the farm near Albany, N.Y., have decided to no longer host any wedding or other ceremonies.


It’s not like the New Testament isn’t quite clear regarding the issue of homosexuality:


1 Corinthians 6:9-11 "Or do you not know that the unrighteous will not inherit the kingdom of God? Do not be deceived: neither the sexually immoral, nor idolaters, nor adulterers, nor men who practice homosexuality, nor thieves, nor the greedy, nor drunkards, nor revilers, nor swindlers will inherit the kingdom of God. And such were some of you. But you were washed, you were sanctified, you were justified in the name of the Lord Jesus Christ and by the Spirit of our Go."


Romans 1:26-28  "For this reason God gave them up to dishonorable passions. For their women exchanged natural relations for those that are contrary to nature; and the men likewise gave up natural relations with women and were consumed with passion for one another, men committing shameless acts with men and receiving in themselves the due penalty for their error.”


Under Islam, you can be put to death for homosexuality.
Here in America, it is not the homosexuals who are subject to restrictions. It is people of faith who are being told they must provide services and products to them in the context if they intend to marry or as a reflection of their gender preference.
Urloved Photography is a small business in Northern California specializing in wedding and event photograph. In response to a request from a gay couple, Urlove replied with an email that said “Thanks so much for contacting us and for your very kind words. We feel that photographing a gay wedding is not the best match for us, however we can refer you to a colleague who would make a great match. We wish you the very best!”  In California, however, one cannot reject business on the basis of sexual orientation.


Some states are trying to extend a measure of legal protection against the demands of homosexuals. In Kansas, its Federal and State Affairs committee has passed a bill aimed at protecting individuals, groups and businesses that refuse for religious reasons to recognize same-sex marriages or provide benefits to gay couples. Kansas law already protects employees from being sanctioned based on religious beliefs.


Federal judges have recently struck down bans on gay marriage in Oklahoma and Utah. In Indiana legislation to protect residents with strong religious beliefs from having to provide services and products to same-sex weddings is under consideration. In October, however, the U.S. Supreme Court struck down Indiana’s gay marriage ban.


Our states are sovereign republics in their own right. That should be respected.


We are witnessing the arrogance of the homosexual community pitting itself against millennia of tradition and spiritual belief. Can’t find a photographer, florist or baker who wants to provide services for your same-sex wedding? Find someone who will.


Instead, states are caving into homosexual demands and asking their residents to abandon the reality that marriage is intended solely for a man and a woman.

Correction: It is my understanding that it was the state attorney general who brought the charges against the flower shop, not the gay couple.
Posted by Alan Caruba at 8:37 AM

Re rights of citizens come from God, I cannot find teference to God in the Constitution.

Sadly, the best defense is to simply LIE. When I was a contractor in my own business, I would occasionally come across a job I did not want. Usually, it could be it was just a difficult job that I did not want to get involved with, or sometime it was a gut feeling that the customer was not one I would get along with as the job progressed. Instead of saying NO, and being honest and telling them that I did not like the way they looked or sounded, I would simply state I could do the job, but not at the time frame they needed, or would simply raise my price to the point where it was well worth my extra trouble.

So, we must learn to LIE. Tell these gay mafiosos that you would LOVE to work for them, but you cannot meet the deadline, or quote a price that makes them hiring you not worth it to them. If you quadruple your price, and they still say yes, well, then sub the job out and whistle while you cash the check. Most of the time, if the price is too high, the customer will go somewhere else. But by all means, NEVER say you can't do the job because he customer is GAY. LIE LIE LIE. There is a saying in the legal world, deny everything and demand proof thereof. Sadly, honesty is NOT the best policy. If you wife asks if her jeans make her look fat, say no. If a gay couple ask if the reason you don't want the job is because of their gayness, say no....same rule applies.

@rms: The Constitution is a SECULAR document, but the First Amendment guarantees the free exercise of religion.