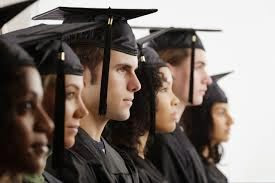 All manner of people are giving commencement speeches to students graduating from colleges and universities these days. It is doubtful that any will be remembered because the prospects of students depend in large part on the economy into which they are entering, the majors they pursued, their individual ambitions, and capacity for hard work. Then, too, there’s dumb luck which often plays a role.


For those graduating this year, my profound sympathy because the economy could not be much worse short of being declared an official Depression. Out of a total of 330 million Americans, there are currently 93,194,000 Americans who are not in the workforce because they can’t find a job or have given up looking. Even in the field of manufacturing—not something you studied for—the number of jobs have declined by 7,231,000, some 37% since manufacturing peaked in the U.S. in 1979.


U.S. economic growth rate has slowed to 0.2%. In short, it is virtually non-existent. So, with your diploma in hand, unless you majored in the sciences, math or engineering, you are not likely to join the workforce any time soon.  Those of you who majored in social work, theatre arts, elementary education, and something called parks and recreation, are going to be at the bottom of the salary scale for the rest of your life.


You are at a further disadvantage because the curriculums of the government schools you attended have been so distorted that you have been led to believe that the Founding Fathers were all slave-owning, white elitists when in fact, many opposed slavery, the labor source of their era, and would have abolished it. However they knew they could not get the Constitution ratified by the southern states if they did. It’s called compromising for a greater goal, the finest and currently the oldest functioning Constitution on Earth.


Depending on your race and sex, you have already been taught to blame anything that goes wrong in your life on whether you are white, black or Hispanic, male or female. If you want to know what’s wrong, look in the mirror and ask yourself what you are doing wrong or not doing right—dressing, manners, behavior, addictions, et cetera.


If you have been raised to believe in God and have spiritual values, you are likely to be mocked, though not necessarily to your face. While still the majority faith in America, Christianity is under attack from many directions, not the least of whom are homosexuals that constitute less than 2% of the population. Their attack on traditional (and biological) male-female marriage that has been part of every civilization going back five thousand years and more will degrade society in many ways.


For many of you, graduation means years of paying off huge loans for the privilege of picking up a degree that, as noted—short of science, math and engineering—will not yield a lot of income. This will impact your lifestyle including possibly having to move back in with your parents. It may mean putting off marriage and a family of your own for a while and your loans will affect being able to secure a mortgage on a home, but everyone is having problems doing that these days.


So, if all this looks and sound bleak, it is because it is. A real commencement speech should tell you the truth but most of them do not. They are generally filled with inspiring talk about the future.


The future you are looking at along with everyone else is fraught with danger. That, however, can be said of every “future” that every American has faced since the nation was established. It took a shooting war with Great Britain just to have a nation and Americans have been engaged in wars large and small ever since.


The threat of Communism faced Americans after World War Two and generations previous to yours waited out and opposed the Soviet Union for nearly fifty years before it collapsed. Communism is still around however in China, nearby Cuba, Venezuela and other nations who suppress their people in the name of the utopian society they claim to have.


The more recent threat is the rise of Islamism, radical Islam as practiced and supported by a significant percentage of the world’s one billion-plus Muslims. It is a cult about Mohammed based on the total domination of the world. Divided between two sects, Sunnis and Shiites, when they are not killing each other, they are killing “infidels”, anyone who is not a Muslim.


It will fall to you and your fellow graduates to fix the nation’s problems and right now its biggest one is that the federal government is too large and we are collectively facing an $18 trillion debt that must be resolved because just paying interest on it makes doing anything else difficult at best.


All of the states are in debt as well as they struggle to pay the health benefits and pensions of civil service workers, active and retired. That often doesn’t leave much money for fixing potholes and other infrastructure needs.


Whatever problems you will encounter, keep in mind previous generations often encountered much worse, such as those in the 1930s during the Great Depression and in the 1940s who fought World War II, and those from the 1950s and 1970s who were called on to fight the Korean War and the war in Vietnam; more recently those who fought the war in Afghanistan and Iraq. Respect their sacrifices and their courage.


If you want to see the government grow even larger along with the debt, vote for Hillary Clinton. She’s still mentally and ideologically stuck in the 1990s, plus she has engaged in behavior that would get anyone else put in jail. You have a large choice among Republican candidates and eventually it will narrow to someone capable of tackling the future.


The best I can do is to wish you good luck. You’re going to need it.

In this post you claim that voting for Hillary Clinton will make government spending Increase.

ALL Government spending is controlled by Congress.

Both Houses of Congress are currently controlled by the Republican Party.

I Repeat: ALL Government spending is Controlled by Congress.

Please EXPLAIN how the President can be responsible for Government spending then the CONSTITUTION clearly states that authority is given to the Congress?

The President sets spending policy. You may have noticed that Obama added $6 trillion to our national debt. With the consent of Congress. Until Obama is gone that is not likely to be corrected and reduced. Hillary would be a repeat of Obama's policies.

Depending on your race and sex, you have already been taught to blame anything that goes wrong in your life on whether you are white, black or Hispanic, male or female.

Racist AND sexist?? Wait, Hispanic isn't a race... Mow I'm all confused, I'm not going to say any more for fear of being branded as *something*... LOL