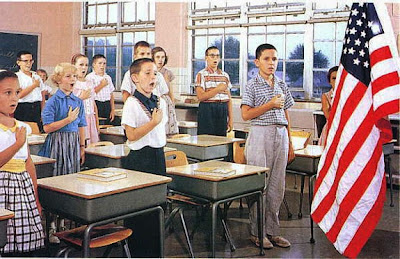 
In the 1940s and 50s, what passed for sex education was literally about the birds and bees as metaphors for inception and child birth. The emphasis was on waiting until marriage to engage in sex. There were instructional books with a mostly medical orientation to the information they provided but whether they could be found in the schools is anyone’s guess.


Somehow that generation (and earlier ones) managed to learn enough about sex to engage in it within the context of a society that regarded sex outside of marriage as sinful. By the 1960s, the generation fathered in the wake of World War Two told everyone not to trust anyone over thirty and that sex, drugs and rock’n roll were the only things that really mattered in life.


In 1979, with Jimmy Carter’s blessing, the federal government took control of the nation’s educational system via the Department of Education, but the real takeover began much earlier. It has been in serious decline ever since with huge dropout rates and failures to learn reading and math that put us well behind when compared to other nations. Traditional American values have often been abandoned.


Eugene Delgaudio, president of Public Advocate of the United States, recently emailed members and those who follow the organization’s issues about “a little first grade boy (who) asked his mother if he was ‘transgender,’ and if he could be ‘a girl in love with a girl.’”


His school, Mitchell Primary School in Maine was teaching about the “transgender” lifestyle. His mother was upset to learn about this, but as is frequently the case, parents are the last to learn about sexual information and attitudes being taught. In this case, isn’t first grade just too damn early for transgenderism to be a part of the curriculum?
Delgaudio is largely focused on “the radical Homosexual Lobby and their allies in the education system (that) routinely refuse to give parents any options that threaten their anti-Family agenda. And, fearing retaliation…the school administrators and superintendent ignored the parents’ outrage.”


The pro-family MassResistance recently informed members and those who follow their issues about “unbelievable surveys given to children in Massachusetts and schools across America” in public middle schools and high schools during school hours. The surveys are “officially” anonymous and voluntary, but are administered in the classroom with pressure to participate.


The major survey is “Youth Risk Behavior Survey” put together every two years by the National Centers for Disease Control. State and local education departments can modify it if they wish. These surveys are now ubiquitous.

Among the questions students must answer was whether they were heterosexual, homosexual, bisexual or "not sure."


There were nine pages of the questions and answers to be provided. I was astounded at how personal and intrusive the survey was. And I seriously wonder whether such information would have any impact or influence regarding the behaviors involved. Indeed, the survey went far beyond the topic of sex.


I don’t like having the government involved in such intimate areas of student’s lives. These are questions and issues parents should address with their children, determining the right time to do so and providing whatever information they deem appropriate.


Having said that, it would be naïve to suggest that today’s youth from a very early age cannot access tons of information about sex from the Internet. A 2010 study of 177 sexual health websites by the Journal of Adolescent Health concluded that 40% of those addressing contraception and 35% of those addressing abortion contained inaccurate information.


In early April, Cosmopolitan posted “11 Facts About Sex Ed in the U.S. That Might Surprise You.”


“While teen pregnancies are on a decline,” said the article, “teens are having more sex—and contracting more STIs (sexually transmitted illnesses) than ever before. The problem, according to a new report by the U.S. Centers for Disease Control and Prevention is that sex education isn’t happening early enough.”


Cosmopolitan noted that only 22 states and the District of Columbia require that public schools teach sex education. In addition, 33 states also mandate HIV/AIDS education, and 35 states let parents opt out on behalf of their child.


Does it surprise anyone to learn that the 1981 Adolescent Family Life Act which promoted “chastity and self-discipline” was ended by the Obama administration in 2010? We have all being living with an administration which dismissed enforcement of the Marriage Defense Act and is the most pro-homosexual administration in the history of the nation.


We are a sex-drenched nation in terms of popular entertainment. It is experienced from the earliest years of any child’s life. This means parents have to be pro-active to ensure their children get the education they need to avoid the STIs and more importantly not to impregnate or get pregnant.


In the meantime, there is no knowing what they are learning, for good or ill, in school.

Alan,
Great topic. I personally think no one is born a homosexual, it is a choice. Since it is a choice they should not be qualified as a minority in the same way as racial makeup.
Face it, homosexuals are a biological failure because they can't reproduce.
Why is our society so hell bent on promoting it is a valid lifestyle?

I think that some people are born with the brains mal-wired so they prefer their own sex. They tend to know this at an early age.

As for the homosexual assault on our nation's traditional values, I have no sympathy whatever for them.

Judging by the fact that the Stock Market has tripled during his administration, I would have to say that Mr. Obama is the worst communist ever.

If he wanted to destroy America, like these digbats say he does, he’s surely taking his time and doing a lousy job of that too. All leading economic indicators are positive. The only perspective in which he’s doing a bad job is through the crap colored glasses of Fox news.
The fact of the matter is that there was no apology tour, and there NEVER was any, and there is no contempt for our country as these dingbat rightwing TeaGoobers claim.

WHO THE HELL CARES IF HE IS A MUSLIM OR NOT, WHICH HE ISN’T? .

I have read a number of his speeches and they are often quite patriotic. Mr. Obama often praises our country and cites to his career as how we have great opportunity. (you never watch his speeches, as you find them personally irritating).

Obama has NEVER questioned anyone on the rights patriotism. I have, and plenty of others have, with good reason. Obama has NEVER said that someone on the right, or anyone, wasn’t raised like you or me. And Obama talks about American Exceptionalism all the time. This is just like the lie that Cruz’s dad told, about Obama never says God bless America. Obama ends every speech with “God bless America!”

Barack Obama is NOT a communist. Again, one must understand the concept before posting such stupid things. And with a black President residing at 1600 Pennsylvania, their racism is in full bloom. Racism so obvious, that even Stevie Wonder can see it.

Is it any wonder why most people are regarding former NY mayor Rudy Giulian’s comments as being Racist? BECAUSE, BY THE WAY, THEY ARE.

Ezzee, your opinion is posted, but I disagree with every word of it.

I distributed the surveys you cited for many years before I retired from the middle school where I taught. My former students often told me they had fun filling them out with outrageous answers.

They're anonymous, and I imagine I would probably have done much the same thing when I was their age. Imagine the fun they had at recess or on the bus ride home telling each other what they wrote.

It made me chuckle to visualize the lefty wonks at the CDC or US Dept of Ed scrutinizing the results and drawing conclusions based on those smart-ass, mocking answers.