The Flu By Any Name 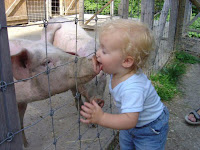 First of all, it’s not the “Swine flu”, it’s the Mexican flu. That’s the nation where it mutated into a combination of swine, avian and just plain flu. Mexico is a place that exports people, drugs, and now this new strain of flu.

Third, pay as little attention to the media as possible. While in the process of dying from a total lack of credibility newspapers, along with much of the broadcast media, have been doing their best to frighten everyone with reports of worldwide pandemics that we are assured will kill thousands, if not millions.

From 1918 to 1920, there was a flu pandemic that spread all around the world and killed a lot of people. Back then, however, you mostly learned about the flu when your neighbor died and then your neighbor’s neighbor died. Today, if someone sneezes on an airplane they land at the nearest airport.

Fourth, just plain, ordinary flu kills about 36,000 Americans every year according to people who keep track of such things. This new strain will no doubt kill off the very young or very old, but hardly in great numbers thanks to various quarantines and other measures. And let’s not forget that pharmaceuticals like Tamiflu are available from your local pharmacy. If necessary, a new vaccine can be created and, within months, be available to Americans.

What we have learned at this point is that viruses are forever mutating in order to find some human and/or animal hosts. Pigs can catch the flu. Birds, too. Most people are unaware that a great way to get Salmonella is to kiss your pet.

Simply put, Mother Nature has a nasty streak that is forever looking for ways to kill off people and other critters. As often as not, she uses a variety of insect and rodent pests to spread so many diseases that, if I began to list them, you would never leave the house.

This is, for example, tick season which is another way of saying this is Lyme Disease season. Ticks also spread babesiosis, ehrlichiosis, bartonella or tularemia. So, lots of luck the next time you go hiking or camping. Or just let the kids play in the back yard.

Then there are the mosquitoes that spread West Nile Fever, Dengue Fever, and Malaria, among others. West Nile Fever first was detected in New York City in 1999. It only took five years for it to spread to the West Coast. When New York initially used pesticides to knock down the mosquito population to stop the spread of the disease, the first people to object were, of course, the environmentalists who reasoned that “only old people” would likely to die from it.

Cockroaches which keep themselves very clean nonetheless spread disease. Rodents like mice and rats defecate everywhere they go. I have friends in the pest management industry who will not dine in a restaurant they themselves have not personally treated!

There are some who believe the most dangerous creature on Earth is the human species. It delights in killing its own kind. These days, its favorite means are beheadings and suicide bombings. Whole armies exist for the sole purpose of keeping other armies from killing the citizens of their nation when those citizens are not routinely killing one another. (Check your local evening news or daily newspaper.)

There is no place to hide from humans.
Posted by Alan Caruba at 1:06 PM

I find it interesting that this is getting so much attention at the same time as obama and the left are wanting to shove the healthcare socialism down our throats. As you said, more people die from regular flu bugs every year. News must be slow to focus so much on this. Another thing that I find stupidly humorous is that every day, the media starts their news cast with the flu as their leading story- leading with things suggesting we're all gonna die! Yet, next they tell us not to panic. Oh, I have to laugh at some of this or go crazy. God Bless you Mr. Caruba!

So these "people" want to freeze or starve other people to death (preferably the unwashed masses) to Save The Planet or Save The Polar Bears or who knows what else - just because, these "people" think they are better and WAY smarter than other folks.

If Nancy Pelosi, Henry Waxman, Obama, and a few others get their way about "climate" legislation - then Mexico's economy will look GREAT compared with the US economy.

That means - people will head South of the Border just to survive (rather than to just hang out for a week and binge drink on a beach), or to elude the US Marshalls.

Maybe that's not such a bad thing in the long run, I don't know anymore