Memorial Day: The Blackbird and You 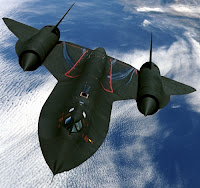 It’s about one of the most remarkable airplanes ever produced by this nation, a spy plane that kept an eye on a lot of evil people in bad places. It was known as the Blackbird and was built to replace the U-2 in which Gary Powers was shot down over Soviet Russia in 1960.

It was built to fly three miles higher and a heck of a lot faster, but it was also built to be able to take a photo of the license plate on Nikita Khrushchev’s car or Fidel Castro lighting a cigar.

They only made forty of these remarkable airplanes. Only 93 pilots would ever fly the aircraft throughout the quarter century it served during the Cold War.

Affectionately the crew called it the “sled”. In 1986, the Blackbird flew over Libya when its dictator challenged the United States and it accelerated away from two missiles fired at it so fast the pilot and fellow crew member crossed the Mediterranean Sea and were just south of Sicily in mere moments. They had to turn around to be refueled over Gibraltar.

The last of the Blackbirds sits in the Smithsonian’s National Air and Space museum in Washington, D.C. In its last trip there, the Blackbird broke four speed records from Los Angeles to its final place of honor.

I tell you this on Memorial Day so you will remember, not just the fallen who gave their lives for America or those who served until honorable discharge, but so that you will remember our men and women in uniform who are presently in harm’s way in Iraq and Afghanistan, and in other places, on board ships of war to protect the world’s sea lanes or flying over a dangerous world.

I want you to look at those old men in their veteran’s hats and remember, too, that they once were young and that they stood watch during the Cold War or braved and survived the hell of war so that you did not have to experience it on your street, in your town or city.

To be candid, I have no use for those pukes who are forever prattling about peace in a world that is armed to the teeth because it is full of evil and/or crazed people for whom the dignity of man and the whole reason for America, liberty, means nothing.

I chafe at hearing those who speak ill of those who put their lives on line to preserve for ourselves and to extend freedom where it never existed. Iraq is one such place. It borders Iran where they hang people for the crime of being human.

On this Memorial Day, only the discipline and sense of honor that military duty imbues will secure the Commander-in-Chief a salute. He has not earned it. He does not deserve it. All his instincts are opposed to the things for which this nation stands. He found it hard to put his hand over his heart or wear a flag pin in his lapel when he was campaigning.

But I will salute everyone else who ever put on the uniform of his or her nation, marine, soldier, airman, sailor, coast guard. And I will say a prayer for those no longer with us on this Memorial Day.

There’s a short film you can watch at
http://www.greatdanepromilitary.com/SR-71/index.htm
Posted by Alan Caruba at 2:57 PM

My rank didn't hear "sir" much, but I enjoyed working G2 in the US Army until they let me go back to being a civilian.

Give my best to your uncle.

Thank you very much for this piece, Alan.

Like the people who make up our military, the "Blackbird" is "special". There was never a plane like it (before it) and I am convinced there will never be one like it, ever, again.

I had made up my mind to celebrate Memorial Day on the 30th, no matter what the government says, but it appears I will be out there, alone, as per usual, if I do.

So... Happy Memorial Day, my friend!

Now, I need to drive out to the cemetery to make sure the flag is flying over the memorial to the Confederate Veterans who, according to the US Congress and US law, are American Veterans, too.

Have a great one!

From New Zealand...this is unoriginal but heart felt...

It's worth remembering, Ayrdale, and this veteran thanks you.

Alan, and to my surprise, our 6 o'clock news featured a church service honouring the WW2 veterans who were stationed here, and left to fight the Pacific battles, particularly Guadalcanal.

Their sacrifice kept the dreaded Japs at bay. Believe me, it won't ever be forgotten.

Our hats are off to any and all of our Vets, past, present, and future, who give so much to make the world safer for us all. In their honor, we spent the weekend celebrating with friends and family. We dutifully expelled hundreds of pounds of CO2. I have no idea how many people were here, or how much CO2 each of our guests exhaled, but I know one thing ... our beer taps alone spewed out over ten pounds of the stuff, and that's not counting the CO2 that's in the beer itself. I'm guessing people are still belching up the stuff today. Take THAT Mr. Obama ..... Or are you going to find some way to tax Memorial Day celebrations into oblivion too?

I am going to finish my Memorial Day with a dinner of barbequed ribs. I think there is something very American about that. The sight of many flags around town was cheerful, too.