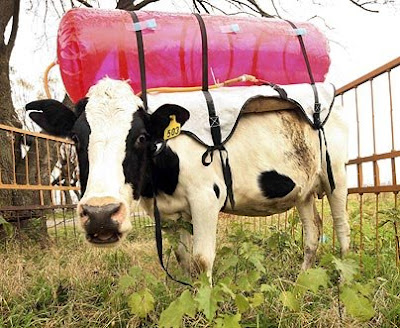 Just how crazed is the Environmental Protection Agency? When I say “crazed”, I mean just how far out of touch with reality, with science, with the economy, with common sense, and with the American people is the EPA?

Ever since the Supreme Court made one of the greatest blunders since the Dred Scott case, declaring carbon dioxide (CO2) a “pollutant” that could be regulated by the EPA, that deranged agency has been pushing a tax on CO2 emissions from cows, pigs, and other farm animals on which we depend for milk and meat at the local supermarket.

According to Encarta, in 2005 there were an estimated 95,848,000 cows in the United States. Presumably, there are comparable numbers of pigs, goats, and other critters that emit belches and farts sufficient to destroy the Earth with the CO2 they emit. Nor should we overlook the six pounds of CO2 that the 307 million Americans exhale daily.

Since there is NO global warming and the Earth has been cooling for the past decade, the proposal that these farm animals be taxed constitutes a criminal act, devoid of any justification.

Since CO2 plays virtually no role whatever in so-called “climate change”, taxing farm animals is a violation of the known science and an assault on the economy in the name of the greatest hoax of the modern age.

It is not, however, a matter of “saving the Earth” so far as the EPA and the rest of the Obama administration is concerned. It is MONEY. And money is POWER.

Suffice it to say that dairy farmers across the U.S. are being forced to send many of their herd to the slaughter house because the price of milk has fallen to the point where it is unprofitable to maintain them. Owners of even a modest-sized cattle ranch would face additional costs of $30,000 to $40,000 a year. Add a tax on cows and you end up with a nation that has to import more milk than oil.

Taxing farm animals is a great way to bankrupt dairy farmers and cattle ranchers, along with all those who raise hogs. After that, it is only a matter of time before Americans would all have to become vegetarians because the cost of meat would put an end to that part of our diet.

As bizarre as the EPA proposal is, the effort by the Democrat-controlled Congress to impose a Cap-and-Trade bill on the nation in the name of reducing CO2 emissions dwarfs the farm and ranch proposal.

The Heritage Foundation has crunched the numbers on Cap-and-Trade concluding that job losses would exceed 800,000 annually for several years. Durable-manufacturing employment would decrease by 28 percent. Machinery-manufacturing job losses would exceed 57 percent. The same would hold true for textile-mills, electrical equipment and appliance manufacturers, paper and paper product jobs, and jobs involving plastic and rubber products.

Cap-and-Trade isn’t just a job-killer, American Solutions estimates that it would increase gasoline prices by 74 percent, electricity rates by 90 percent, natural gas prices by 55 percent, and add $1,600 a year to the cost of living of a typical household.

The result would be to make the Great Depression look like a day at the park, but minus the hot dogs and ice cream.

This is what House Speaker Nancy Pelosi and Senate Majority Leader Harry Reid have planned and they want the bill passed before Congress goes home for its summer recess.

At that point, the destruction of the U.S. economy would be complete and there would be no reason for Congress to return.

Does this seem an extreme conclusion to you? No, it is the reality the nation faces.
Posted by Alan Caruba at 12:29 PM

I think the purpose is to monitor methane emissions, not CO2, and of course to declare such emissions a pollutant.

We are dealing with this lunacy here in New Zealand too, a country totally dependent on its farming sector.

Methane, CO2...it doesn't matter, Arydale. There is NO global warming. There is no reason, nor way, to control emissions...even the Cap-and-Trade legislation allows companies to keep emitting if they just buy the "indulgences" of this scheme. Bottom line, every other nation in the world and every other cow and pig in the world will still be emitting "greenhouse gases."

Alan, I just sent off another letter to my local newspapers condemning the cap-and-trade bill they're cooking up in Congress.

Your "Taxing Cows" article shows how this issue has become a parody of itself and hopefully will collapse under its own ridiculous weight. Maybe if voters can flip a House or two in Congress in 2010, we can speed the process up, but the damage they'll do before then...

This is just another piece in liberals'/Obama's puzzle to transform our economy into their twisted vision which is enough to make you cry. But we need to laugh also to keep our spirits up which is why I've been sending around the film link below.

This hilarious clip of the last six minutes of the classic 1963 comedy film "It's A Mad Mad Mad Mad World" (about a race to find buried money) serves as a perfect metaphor for the US economy under Obama and all the big spenders in Washington.

The firetruck and ladder represent our rapidly socializing economy gone haywire and the men on the ladder (Spencer Tracy, Milton Berle, Mickey Rooney, et al.) are the US taxpayers trying to endure the wild swings before it kills them.

Buddy Hackett, also on the ladder, plays the part of all the businesses who were duped (or threatened) into accepting TARP money with all the strings attached, now wishing they could get out of that deal with the devil. About 2:35 into the clip he says: "I don't want the money! I don't want the money!" Priceless!

And of course, the last scene of everyone plastered in bandages in the hospital room is what Americans are probably going to look, sound and feel like when this socialist nightmare finally ends. Enjoy and keep writing!

We're in this mess because the mainstream media, newspapers, etc, continue to report that global warming is real.

As a former journalists, it disgusts me.

I'll give you an "extreme conclusion".

I was going to start a new business and have contracts signed at the other end and everything in place but I haven't signed my end because it's starting to look like a dead end if the socialists get their dreams. I'm not putting money into anything, job creation or not, until I've got some assurance they aren't just going to rape and bankrupt me.

I'll let my capital sit idle in non-federal reserve form, at that.

Now consider that a hundred, a thousand, and multiples thereof, are making the same decision.

It is the logical decision, but it also stalls the great engine of the economy...and I think that is exactly what Obama wants to do.

Down with the dirty flatulaters!

So now all we need to do is catch "flatulence" to save the world! I used to think that wiping out the American buffalo was a bad thing, but now I see the light. Killing the American buffalo almost to extinction was a good thing. Right? After all….aren’t buffalo “flatulaters”? I understand that termites give off a large about of methane! That means that they are “flatulaters” also. I would really like to see the device that traps their “flatulence”. Let’s see now…..I think bacteria flatulate also? WOW! We REALLY have our work cut out for us now.

That’s it. There is no way we can trap all the gas, so what we need here is a new EPA rule. No more flatulence…period. I hope that someone doesn’t think that is unreasonable. I’ll bet I could get Carol Browner to go along with this, and we know she would never accept anything that was irrational or unscientific. The problem will be in implementation. Wait….I have the solution. Carol and her green crowd will just be quiet and that will save the world from enormous amounts of unnecessary CO2 and that will “offset” all of the world’s flatulence.

The more I read about what is happening in the US and the crackpot ideas ( to the man on the street) being voiced and implemented in Washington the more Sustainable Development rears its 1984 Hydra-like head.
To the rest of the world the US is the last bastion of assumed freedom when compared,say, to the increasingly EU and established Muslim dictatorships.
CO2 is the chief whipping boy for obvious reasons
- it can be used in scare tactics to mould public opinion
- the scares can be used to justify extreme government action on tax generating schemes and environment programmes.
- demonising miniscule CO2 by blaming all our woes on its existance and offering pseudo-science in such a convincing damnation opens the door to agenda-driven politicians.
- allowing unheard of wealth creation and power for its proponents.

The fact remains that truth has nothing whatsoever to do with the course that Washington, or London or Canberra, etc, has charted.

Perhaps people are waking up, though. Choose your reason but this past week's political events in Europe shows a distinct move to the right in rebellion to a left seen out of control, and out of touch with the man-on-the-street.

I sincerely hope that similar clowns in Congress are given a like-wise good hiding in the next elections and these dangerous people thrown out of power.

I'd better stop eating so many bean burritos. They will probably tax me next.