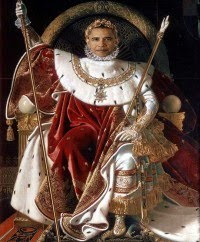 You know things are amiss when a British newspaper takes President Obama to task in an editorial titled, “Too much Obama.”


America and the rest of the world have had nine months of President Obama and all the flaws that were hidden by campaign rhetoric and coverage are now on daily display. The problem, specifically, is too much rhetoric, too many speeches in too many places.

The Times of London politely suggested “he has adopted flawed tactics for which he has only himself to blame.”

“One of these is to be everywhere, all the time. Five television interviews in one day, an unprecedented appearance on a late-night talk show and eight speeches in two weeks have guaranteed him blanket coverage since his summer holiday. But what is on show is the personality of the office holder, not the authority and mystique of the office, which dissipate with every soundbite.”

In classic English understatement, The Times noted “He is somewhat vain”, but suggested most presidents were. That’s like saying all columnists or editorial writers are occasionally vain. In Obama’s case, it goes beyond vanity. There is something creepy about Obama. He doesn’t just enjoy the spotlight; he craves it like an addict.

Democrats in upcoming elections are still running against Bush, but this strategy is not likely to work in November and surely not in next year’s midterm elections.

The war in Afghanistan is now Obama’s war. The unwanted reform of Medicare is rightly called Obamacare. Continued babbling about global warming and climate change, a topic near or at the bottom of the list of American’s concerns, makes Obama look foolish. And, of course, unemployment remains high and recovery is, at best, sluggish.

Mocked as the “Messiah” or “the One” during the 2008 campaign, Obama exhibits all the characteristics of someone who believes that, by words alone, he can transform not just the nation, but the world. A torrent of words is achieving nothing.

The result is All Obama, All the Time.

To the extent that American’s blame the media for helping him get elected, the same media that keep him front and center hour after hour is suffering blowback.

As reported by CNSnews, a recent poll by the Sacred Heart University Polling Institute revealed that “Two-thirds (67%) of Americans surveyed think that ‘objective and fair journalism is dead’, while an overwhelming 89.4 percent believe the news media played a role in the election of President Barack Obama.” In other words, they think they were hoodwinked by the media.

Parenthetically, since September 2008, all forms of journalism, print and electric, have shed 35,800 jobs according to one recent study and those jobs are not likely to return.

Observers of Obama note that the job of the presidency is to represent and defend Americans. “It is not all about him,” is the most frequent criticism.

At some point, much like the ACORN revelations, something from his past is likely to jump up and do severe injury to Obama’s capacity to perform the duties of the office of president.

In the meantime, his failure to publicity note and commend the seizure of three Muslims, separately accused of planning terrorism troubles Americans. His opposition to the Honduran government in favor of a leftist who attempted to usurp that nation’s constitution puts him in the company of Hugo Chavez and the Castro brothers. The trickle of releases from Guantanamo is not going unnoticed. And the Democrat meltdown over Obamacare demonstrates his failure to lead within his own party.

All Obama, all the Time is becoming a national nightmare.
Posted by Alan Caruba at 12:51 PM

Alan, as a frequent reader, I wonder if I could draw to your attention this wonderful anti-terror satirical piece...

...I am trying to get this on a big stage, as I believe we have to break the media censorship over subservience to Islam.