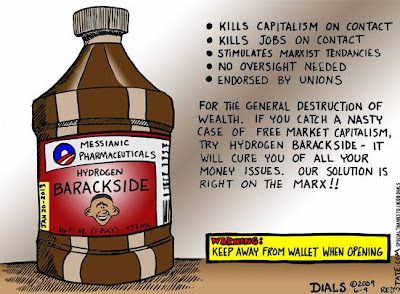 It is not a new observation, but it is one that needs review and repeating every so often. Why do liberals always seem to get on the wrong side of any issue concerning America’s future? Its sovereignty? Its financial security? Its defense?

I think this question is particularly timely given the public discussion of Obamacare that included a huge peaceful protest march on Washington September 12th. The President’s non-stop campaign to get “reform” passed and the heated exchanges in Congress do not represent actual healthcare reform, but are testimony to a liberal obsession with a very bad idea.

You know something is desperately wrong when Democrats will not permit the proposed bill to enjoy a grace period of 72 hours during which both the public and members of Congress can actually read it before a vote is taken.

The irony of the current battle is that the bill will significantly change Medicare, a program advocated by liberals and, like Social Security, established by Democrats in Congress. It will destroy a free market for insurance programs individuals may choose to purchase. Or not.

There is no dispute that both programs, safety nets for Americans, have been helpful. Neither is voluntary There is no doubt that both are insolvent because they are unsustainable. This has been exacerbated by the way Congress has dipped into the funds intended to be set aside for them.

Obamacare will end up killing a lot of the people that Medicare was intended to save from the diseases and accidents that afflict the elderly.

It is not so much a “reform” as an admission of the failure of Congress to properly administer Medicare. Moreover, the “reform” will seize control of one sixth of the nation’s economy and dangerously, insidiously come between physician and patient.

It is a reform that is doomed to failure because there simply are not enough doctors, nurses, and other licensed and certified healthcare providers.

The global warming hoax and the arguments that “saving the environment” justifies a horrid “cap-and-trade” bill under consideration is another example of how liberal zeal for apparently noble “causes” reaps more harm than good. In the process, actual known, proven science has been abandoned.

In many ways, America has historically demonstrated an extraordinary commitment to Nature. The set asides of vast tracks of national forests and natural wonders such as the Grand Canyon and Yellowstone attest to this and the national effort to clean our waters and air attest to this.

The problem, one that was anticipated and feared by the Founding Fathers, is the continued expansion of the federal government’s control over all aspects of our lives. The creation and existence of the departments of education and energy have harmed America in countless ways. The Environmental Protection Agency is an assault on science and property rights. All are essentially unconstitutional.

There never was any scientific evidence for “global warming” and yet it has been the all-purpose “go to” justification for restrictions that range from toilets that lack sufficient power to flush and, soon, a prohibition on the incandescent light bulb. Environmental restrictions have done irreparable harm to the nation’s economic growth.

Natural phenomenon from hurricanes to floods to forest fires have been blamed on global warming and this continues even though the Earth has been in a cooling cycle for a decade and what warming occurred after 1850 was a natural cyclical response to a previous little ice age that had begun in the 1300s.

Liberals, however, lack common sense. Environmentalism has transformed from conservation to a wholesale attack on America’s industrial base and, in a larger sense, capitalism. The Left has always attacked capitalism and the free market system that is essentially self-regulating.

This is particularly evident in liberal efforts to render the nation unable to access its own vast energy reserves of oil, natural gas, and coal. Energy is called the “master resource” because, without it, life can be harsh and progress in the form of innovation and invention, slows. Industrialized nations are differentiated from “undeveloped” nations almost entirely on the basis of the availability and widespread use of affordable energy.

Liberals, however, would not just leave vast parts and populations of the world bereft of the energy needed to grow crops, create jobs, and serve the basic needs of their people, but continue to use environmentalism to denigrate everything from driving one’s car to the use of plush toilet paper.

While America has always been “a nation of immigrants”, the process of accepting new citizens has been undermined in recent decades by the ceaseless flow of illegal aliens entering the nation and not merely ignoring the naturalization process, but also taking wrongful advantage of social programs such as welfare, our educational system, and our healthcare system. Liberals, however, continue to campaign for amnesty programs.

The liberal attack on the institution of marriage, on the free expression of religious faith, and other elements necessary to a civil society is yet another example of the way a nation they profess to love is undermined as its core values are systematically destroyed.

And let it be said that in the decades since the 1960s and 70s, men and women who have been elected to Congress and to occupy the White House on the basis of their avowed conservatism, have too often yielded to liberal arguments and programs. Tax and spend is now a bipartisan philosophy.

Liberals now hold majority political power in Congress and the White House, and the nation has been witness to the abandonment of our allies abroad and an appalling level of corruption, wasteful spending on pet projects, of which ACORN is just one example.

Liberals created the programs that led to massive mortgage loan failures; liberal programs enacted to impose “fairness” ignored the inability of everyone to own their own home. Something was desperately wrong when government entitles such as Fannie Mae and Freddy Mac owned over half of all mortgage loans.

The government’s failure to exercise oversight and regulation over all elements of the nation’s financial system, based on existing laws, has resulted in the greatest ponzi scheme of the modern era and the failure of banks and investment houses. The Federal Reserve is neither federal nor a reserve.

Lastly, the grasp for ever more power, the introduction of unelected “czars” in the executive branch, and the possibility that the most liberal president ever elected is seeking the destruction of the nation call for both action and an increased devotion to conservative principles.

Americans are demanding a return to governance based on the limits of the Constitution and the reduction of senseless spending and borrowing. America belongs to “We the People” and We the People must defend it from those who see America only as a nation to be plundered.
Posted by Alan Caruba at 4:27 PM

Alan, this is a superb commentary on liberalism! It speaks to the issues that more than half of all Americans believe to be the cause of America's decline both domestically and abroad.

You refer to an America "that liberals profess to love." I have yet to be convinced by any liberal that they love America. I think the opposite is true. Obama's speeches are filled with why and how America is wrong and needs "change."

Eight and a half months later we now see that Obama not only doesn't love America, he is bent on its destruction. Either that is true or he is the stupidest man on earth, let alone a president.

It is difficult to even listen to his speeches as they are full of
what America isn't, wasn't and won't be if we don't do as he says. Most of the people I know, who by-the-way-really love America, don't listen to him at all.

Now that we learn of Iran's second nuclear project with clearly bad intentions for their use, I wonder how Obama is going to handle this dicey issue.

He won't handle it at all. He will give speeches ad nauseum and do absolutely nothing of any value. He is totally inept in matters of foreign policy. Of course he will warn Israel not to over react. If I was an Israeli I'd be preparing for a devastating war without the help of the U.S.

This liberal president and congress will go down in American history as the most destructive and dangerous government we have everr had. I hope history also shows that patriotic and brave Americans STOPPED them in their tracks!