Boring Us to Death 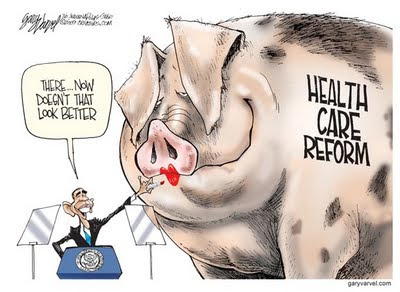 I think President Obama and the Democrats have found a way to move hated legislation through the houses of Congress. They intend to bore us to death.

Following his prime time speech to the joint session of Congress on Wednesday evening, on Sunday Obama will be featured in a segment on CBS’ “Sixty Minutes” and on Monday he will give a speech on the nation’s financial crisis.

The President has given over a hundred speeches regarding his still totally undefined “healthcare reform”, ceaselessly repeating the same vague notions of why a long established system cannot be fixed in its bad parts, but must be thrown overboard and recreated virtually from scratch.

The other element is to produce bills that are all a thousand pages or longer, ensuring that no Senator or Representative is ever going to read them. Their legislative aides are assigned that task and many can be seen wandering the streets of Washington in the late hours mumbling incoherently to themselves about Sub-Section B of Part A referencing Paragraph D.

Mercifully, former President Bush took every opportunity to escape back to his ranch in Crawford so we didn’t have to see or hear him every day, but Obama has an unquenchable desire to be the center of attention all the time. We usually try to discourage such behavior in children, knowing they will likely grow up to become lawyers, actors, or snake oil salesmen.

About the only people paying any serious attention to Obamacare are the nation’s senior citizens, the only legitimately mature population and they don’t like it. If there’s one thing getting old teaches, it is that there is always some lowlife trying to rip you off. Frequently these people are politicians.

While the eyes of millions glaze over, the President continues to repeat the same incomprehensible gibberish about redistributing the wealth, insuring the uninsured, expanding healthcare, but not expanding the number of doctors and nurses to administer it. Paper-Pushers of the World Unite!

With any luck, a brain-dead gathering of Congressional Democrats known as the “majority” will split apart at the last moment like a watermelon getting a full load of buckshot.

As devoid of conscience as they are, a goodly number know that Obamacare is just a scam to pay off the unions and that their own mother may have to fly to Belize to get a boil pierced or wait six months. They will begin to worry about reelection and the game will be over.

Waiting in the wings for the same overload of deception is the Cap-and-Trade bill that will prove the coup de grace to the nation’s economy.

Obama isn’t fun any more. He’s the annoying kid who’s so desperate for attention, applause, and love that only his girlfriend will put up with him. By the way, where is Michelle?
Posted by Alan Caruba at 12:28 PM

I refuse to watch that fool and rely on all you people for the true scoop on all the crap that is being spewed.

I'm with Necromancer. I don't dare watch/listen to the Commisar in Chief. I don't want to have to buy a new wide screen TV.