When Did Energy Become the Enemy? 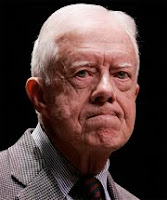 One of the most curious and, frankly, frightening aspects of environmentalism is its hatred of the use of energy. One can draw a straight line between the Carter administration that imposed a windfall tax on the U.S. oil industry and the present Obama administration that is all for offshore oil drilling just as long as it takes place in Brazil, not America.

There is, in fact, offshore oil exploration and drilling in the Gulf of Mexico, particularly near Florida. The problem is that it is being undertaken by China and Russia.

In America, Ken Salazar, Obama’s Secretary of the Interior, is likely to slow offshore development, but it should be noted that 85% of the nation’s continental shelf has long been under a ban against exploration and development, and was throughout the eight years of the Bush Administration. The same holds true for vast oil deposits in Alaska’s ANWR area.

Until the 1970s, America’s economy thrived on affordable energy. Fully 85% of all the energy we need and use comes from coal, oil and natural gas. That is not going to change despite all the blather about “renewable energy” sources such as solar or wind. Neither of these has proven to be either reliable or affordable without huge government subsidies wherever they have been tried.

The result was “a death notice” to the industry. “Many U.S. oil and gas companies went bankrupt because of the windfall profits tax. Those U.S.A. oil companies which survived were forced to go overseas to explore and drill in foreign countries.”

The result of the windfall profits tax was that it forced “the U.S.A. to defend Middle East oil.” And that, dear reader, is why we are still in the Middle East providing an umbrella of protection, rescuing Kuwait from Iraq, then having to re-invade Iraq, and now faced with a decision to militarily end Iran’s quest for nuclear weapons with which to threaten other Middle East nations.

Graham, with more than fifty years experience in the oil industry, has also been vocal in opposition to yet another idiotic government mandate, the addition of ethanol to every gallon of gasoline drivers must purchase.

Ethanol is touted as another “clean” energy alternative, but Graham notes that even as it reduces the mileage available from each gallon, it also emits more carbon dioxide into the atmosphere. “Clean biofuel is the big lie”, says Graham. That said, carbon dioxide not only plays no role in “global warming”, but there is no global warming; the Earth being in a cooling cycle for the past ten years.

Just like Jimmy Carter, Barack Obama regards oil, natural gas, and coal as the enemy. Jerome Corsi of World Net Daily recently warned that “President Obama declared war on oil and natural gas at the United Nations global warming summit and he made the same pitch to the G20 meeting in Pittsburgh.”

Obama told the UN, “I will work with my colleagues at the G20 to phase out fossil fuel subsidies so that we can better address our climate challenge.”

A recent New York Times article noted that “The oil industry has been on a hot streak this year, thanks to a series of major discoveries…these discoveries, spanning five continents, are the result of hefty investments that began earlier in the decade when oil prices rose…”

First, note that the discoveries are the result of risks taken nearly a decade ago. It takes a long time to find new oil reserves and it requires billions of dollars. Second, note that these discoveries have largely been in other continents.

Third, if U.S. policy deliberately reduces the ability to make those investments by phasing out “fossil fuel subsidies”, it ensures that the nation remains dependent on Middle East and other foreign oil imports. Fourth, it puts the lie to the endless talk of America becoming “energy independent.”

America has been systematically stripped of access to its own interior and offshore energy reserves since the 1970s and at the heart of this conspiracy have been the many environmental organizations that have first secured legislation to enable their obstruction and second to impose, often through the courts, measures that attack, not just energy, but agriculture, timber, and other formerly thriving elements of the nation’s economy.

The destruction of America is moving apace and we have a president who continues to lie about “global warming” in order to further its decline.
Posted by Alan Caruba at 12:29 PM

Aside from the "GlobalWarming"issue, (and I agree with your position entirely) our Government has,in the past 2 weeks, provided approximately $10 Billion in loan guarantees to Brazil (I think) for offshore drilling operations along their coastline as well as in the Gulf of Mexico.
DUH!!!? Everybody, China, Russia, Brazil, gets to drill in the Gulf but us? Do you think there is some sort of "one hand washes the other" going on here? We, as a nation and a society, are being sold on the auction block, and we're not bringing much of a price.
As far as the 'environmental movement' goes, I've had better bowel movements.

One would like to think that their government was on their side. When it comes to energy it doesn't seem to be.

What's the percentage of the population who is against drilling offshore and Alaska? I don't know any personally that hold to that view. Is this another example of a small minority dictating to the majority?

One of the great men who lead the fight against the hypocritical (red)greens in the 1980's was the late Petr Beckmann. From his home Petr published "Access to Energy". I treasured those monthly bulletins and regarded them as my most useful resource when de-bunking our very powerful anti-nuclear left wing lobby.

Petr obviously named his bulletin carefully. He knew that a prosperous, free society would become more prosperous and enjoy more freedom as energy became cheaper. The green left know this too, hence their anti-energy stance.

Petr died in 1989 I think, but he deserves mention and he desrves recognition.