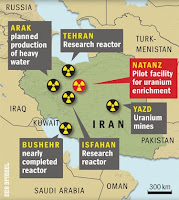 Two hapless Americans, Shane Bauer and Joseph Fattal, have been held hostage in Iran for eighteen months. Hikers, they and Sarah Shourd, were taken prisoner in what is generally described as “an unmarked border area between Iraq and Iran.”

As much as I sympathize with their problem, I keep asking myself how can three Americans, two aged 29 and one 32, have been so oblivious to the danger of hiking anywhere near Iran, let alone in northern Iraq? Their naiveté is appalling. The world is filled with other places to hike.

Ms. Shourd was released by the Iranians on a $500,000 bail in September and you can bet that it was provided by the U.S. via the Swiss ambassador, our go-to guy there.

On Sunday, Bauer and Fattal, charged with illegally entering Iran for the purpose of espionage, were subject to a judicial hearing before Judge Abolghasem Salavati, the Iranian version of Vlad the Impaler. Their lawyer was not given the opportunity to meet with them before the three-hour session to prepare a defense. This is what passes for justice in Iran.

Lawyer Masoud Shafii said that he had requested that “they are freed immediately. We reject all the charges, and I think the 18 months they’ve already served is more than enough.”

This is the equivalent of Iranian kabuki theatre because justice has nothing to do with the fate of the two hikers. They, like every other hostage the Iranians have taken since their 1979 revolution, are just bargaining chips, pawns to be used in their endless war with America and the West.

It began with 52 American diplomats and embassy staff that were held for 444 days until the day Ronald Reagan took the oath of office at his first inaugural.

Does Barack Obama today look any less weak than Jimmy Carter did? The answer is that America and other nations, Great Britain and France for example, have grown so accustomed to negotiating with the Iranians over their hostage nationals that it has become “normal” to do so.

It is a very bad “normal” and it ignores the criminal, fascist nature of a regime for whom hostage taking is routine. Indeed, Iran “is open to a deal, saying the country would be willing to negotiate an exchange for Iranian prisoners held in the U.S.—a notion the U.S. has rejected”, according to The Wall Street Journal.

For now the two hikers will remain in jail before an equally bogus trial is held. Reporting for The Wall Street Journal, Farnaz Fassihi wrote, “Analysts say that the hiker’s case has become caught up in Iran’s internal political rivalries and its standoff with the West over its nuclear program.” You think?

Bauer and Fattal will be set free only if the U.S. agrees to a secret deal with the Iranians and that will be a bad deal for the U.S. If there is no deal, they will rot in an Iranian prison, guilty of extreme stupidity.

No matter their fate, there are far greater future options at stake. The closer the Iranians get to weaponizing nuclear materials, the closer the world gets to running out of options to stop them.

The deal I would offer them is to put those hiking morons on the first plane out of Tehran or expect a couple of guided missiles to arrive at the several known nuclear facilities in Iran.

Even Bill Clinton let fly a few to try to kill Osama bin Laden and managed to blow up a Libyan aspirin factory thanks to bad intelligence. Still, it sent a message.

Think about it. The Iranians don’t have missiles that can hit the U.S. homeland. Their navy would be obliterated by ours in hours. We already have 50,000 troops in Iraq and others in Afghanistan. If you think they are there on “training missions”, you’re dreaming.

Not only do we have nukes, but the Israelis do as well and they need to send a signal to their “neighbors” in the Mideast, most of whom are praying they nuke Tehran anyway.

It’s not like we haven’t been patient and forbearing in the face of years of insults and threats. It’s time to send an “or else” message, but I doubt that day will arrive for at least two more years; say sometime after January 2013 when Barack the Uncertain is sent packing to Chicago.

Like the final days in office of Jimmy Carter, the Iranians have concluded that America has elected a sissy.

Alan, this completely off topic, but I noticed you are an AOL customer, so I thought you might be interested. Feel free to post or not as you see fit ....

You have to cast a wide net and pick through a lot of trash to harvest any factual news today. No one source can be trusted, although many can be ruled out entirely. Several of the major networks, that used to be America's primary news sources, have become so biased and irrelevant that watching or reading them is pointless if you're looking for anything that even resembles truth or reality.

So, when I heard that AOL had acquired Huff Po today, I scratched yet another source off the list. Of course, AOL had already gone off the far-left end as far as I was concerned. I quit using AOL for my primary e-mail service a while back, when they gave my e-mail address to the White House and I started receiving propaganda from Obama and Michelle (yes, they actually did that!). I stopped reading AOL's liberally biased news feeds out of disgust long before that, but I kept their dial up e-mail service for emergencies out of convenience. When FOX News started carrying AOL feeds a while back, and I would read them occasionally, sometimes accidentally, sometimes just for kicks, but never again! Are you listening, FOX News?

I will be disregarding anything with the AOL logo on it from here on out, because any company that considers garbage like the Huff Po to be relevant cannot be trusted to provide factual news ...

I canceled my Time Warner Cable service several years ago, and my remaining AOL dial up service was canceled this morning. They won't receive another penny from me, and I've heard that they were flooded with similar cancellations today.

I respect their first amendment rights, but if, like NPR, they insist on feeding us a diet of tainted information, the logical solution, and our only option, is to defund them.

Verizon will be happy to set me up with faster, more reliable wireless connection. It will be far more portable, and I won't have to deal with an endless stream of liberally biased propaganda invading my home.

It's free for just a couple of hours more, but information about ordering the DVD is provided.

I've just watched the movie and give it a five star rating for high quality truth telling about a dangerous threat to national security that must be addressed as soon as possible by ruthless military force.

The title of the movie is "IRANIUM"

Thank you for posting another timely and well written blog about Iran; clearly the entire world’s number one threat.
I thought you and your readers may not be aware of this new documentary movie that was just released yesterday depicting Iran's insatiable desire and determination to acquire nuclear weapons and to USE THEM against the West. This documentary clearly exposes the mortal danger the current Iranian regime poses to not only Israel and America, but the entire world. Here is a link for a limited time offer for "free" viewing of this one hour long documentary. This is a must watch for every American citizen:
http://www.iraniumthemovie.com/