Islam and the Prospect of World War Three 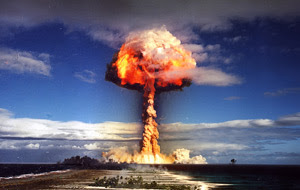 Almost from its beginning, Islam has been a religion divided by warring camps. The tragedy of Islam is that Muslims are far more likely to die at the hands of their co-religionists than by those outside their faith. All religions have their sects and divisions, but Islam’s history is particularly defined by the violence that began shortly after the death of its founder, Mohammed.

If the turmoil in Egypt is about freedom than recent history gives little evidence that Arabs have any talent for it. Iran is a prison-nation. Syria is ruled by the son of its former dictator. Hamas rules Gaza. Monarchies. Et cetera.

I am beginning to think that the world is actually witnessing a repeat of the dispute between the two main branches of Islam, the Shias (also called Shiites) and the majority Sunnis. Meanwhile, in Egypt the killing of Christian Copts continues unabated while Iraqi Christians are being driven from that nation.

When the prophet Mohammed died in 632 AD, what followed was a struggle for control of Islam. Sunni Muslims, the largest of the two branches, believe that Ali, a cousin of Mohammed, was the fourth and last of the “rightly guided caliphs”, successors to Mohammed. Shias believe that Ali should have been the first caliph.

Preceding Ali were Abu Kakr (632-634), Umar (634-644), and Uthman (644-656). Uthman was murdered while at prayer and Ali then became the caliph. He was, however, opposed by Aisha, Mohammed’s widow and the daughter of Abu Bakr. A number of battles ensued. Ultimately, Mu’awiya declared himself caliph.

Here’s where it gets very odd. The line of Mohammed’s direct descedents through Ali ended in 873 CE when the last Shia Imam, Muhammed al-Mahdi disappeared within days of inheriting the title of caliph. He was four years old at the time!

Shias refused to believe he had died, concocting a story that he was merely “hidden” and would return.

This latter version of Shia is the heart of Iranian Islamic theology which includes the belief that, in order to facilitate his return, the world must first sink into complete chaos with massive loss of life, a kind of Islamic Armageddon.

Thus, the acquisition of nuclear weapons by Iran is looked upon by Sunnis and everyone else as truly a matter of life or death on a global scale. It would be the prelude to World War Three.

Sunnis take their lead from Saudi Arabia where the royal family is seen as the protectors of the faith and the two most holy sites of Islam, Mecca and Medina.

Muslims can be found in more than 200 nations these days and represent 23% of the world’s population. One out of every four people on planet Earth is a Muslim. Only 20% live in the Middle East and North Africa, the site of present conflicts.

It has been the fate of Middle Eastern and other Muslims to live with a conflict that began in the seventh century. Islam’s Sharia laws reflect seventh century values. They are at odds with hard won modern values of civilization.

The culture of the Middle East and northern Africa, dominated by Islam, has kept the people of that region in poverty and under the fist of oppression for the last 1,400 years. Mideast Muslims in the modern era have been striking out at the world blaming it, not Islam, for their problems. Al Qaeda is an example of this, along with the Taliban, and the Muslim Brotherhood.

The reappearance of a modern state of Israel in 1948 brought everything to a boil. If Islam is the one true faith, the presence in its midst of a Western, democratic, militarily powerful and economically successful Israel severely challenges that belief.

After successive wars on Israel, Arab nations were repeatedly defeated. Further aggravating Muslims is that Israel is holy to both Judaism and Christianity. Jerusalem is not even mentioned by name in the Qur'an.

Sunni-Shia battles commemorate its schism and include Suffin, Karbala, and Zab, the last having been fought in Egypt.

In the last century the Middle East has been treated as the West’s fiefdom, divided among colonial powers, manipulated for control of its oil.

In recent times Middle Eastern nations were invaded, first by the former Soviet Union invading Afghanistan and, after Iraq’s invasion of Kuwait and 9/11, the U.S. invaded Iraq twice. From 1980 to 1988, Iraq waged a long war against Iran that ended in a stalemate. Syria occupied Lebanon for decades. There have been clashes as well between Muslim Pakistan and largely Hindu India.

President Obama’s insistence that the Muslim Brotherhood play a role in any future government of Egypt ignores the fact that it is sworn to kill Christians and Jews or make them dhimmi, subject to taxes and humiliation.

In its own words the Brotherhood’s guiding principles are, “Allah is our objective. The Prophet is our leader. Qur'an is our law. Jihad is our way. Dying in the way of Allah is our highest hope."

The Mubarak regime ruthlessly suppressed the Brotherhood that, among other deeds, assassinated his predecessor, former prime minister, Anwar al-Sadat and just tried to assassinate his vice president, Omar Suleiman. Not exactly democracy in action.

Those who rule Egypt are sorting out their difficulties and will resume power, but while all eyes are on the land of the pharaohs, it is Iran that threatens World War III.

To say that violence started 'after' Mohammed's death may be misleading - he succeeded by applying extreme violence, which was the usual at the time.

@Abbie S. Read it again, it is about Islam after Mohammed's death, not the events leading up to it.

Excellence analysis of the current situation in the Middle East.

Let's list some of the dangers that America faces today: The public almost evenly divided between the advocates of socialism and capitalism with no compromise possible and civil war waiting in the wings; an economy slipping deeper into the worse economic conditions since the Great Depression; an Administration made up of Communists, Socialists, and Fascists who hate the Republic and work daily for its downfall; yet another totalitarian movement - Islamism - marching to the drum beat of world conquest.

Can America survive this "Perfect Storm" aimed at her destruction?

It is said execution in a few hours concentrates the mind wonderfully well for survival.

@Ronbo. If the Republic survived Jimmy Carter and Bill Clinton, it can survive even the likes of Obama.

The resistance of 26 States to Obamacare is just one example of this.

I not only agree with your essay, but also once again must thank you on a personal level. I keep learning so much form your well researched articles and it is always a pleasure.

@Joetote: Thank you. After fifty years as a book reviewer, I have learned a few things, eh?

LOL! Yes you have. Isn't it absolutely amazing what one can learn just from reading? How I wish our younger generation would realize that!

It's taken a lot longer for it to escalate to full blown global conflagration, but make no mistake, it will escalate.

The Islamic infestation is only waiting for the right time to strike again..

Today could be very symbolic too. Reagan's birthday, The Super Bowl, and we know that Muslims are big on symbolism...

What say you to the idea that the return of the Caliphate might be a good thing, in the medium term? My reasoning is that there would be one authority in interpreting the Koran, and one....target.....if the caliphate got troublesome. Part of our problem now is that the bad guys are dispersed and are not nation states.

@Cargosquid: I think a new, global caliphate would be a bad idea and, as the commentary notes, the Sunnis and Shias have been fighting one another almost since the beginning of Islam. Not going to happen.