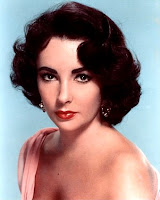 I can recall, even in 1944, sitting in the cavernous theatre in my hometown, watching “National Velvet” and thinking that Elizabeth Taylor was the most beautiful girl I had ever seen. As I grew older I continued to think of her in terms of her stunning beauty, only gradually realizing that she was also an excellent actress.

She was rather fearless, taking on roles whose characters had all the human flaws of character, but who were never boring. She could be forgiven everything for being so beautiful.

Her seven marriages, twice to Richard Burton, had a tragic quality as she seemed to be on an endless search for true love. Being larger than life seemed to be a curse.

Along the way we tended to forget she had four children, ten grandchildren, and four great grandchildren. How could a goddess be a mother and grandmother? But she was and a good friend to many fellow performers.

In Hollywood where beautiful women were its stock-in-trade, Taylor endured and triumphed.

For those of her generation like myself, her death comes as a reminder of our own mortality, but her film career ensures she will live on beyond mere life.

Few actresses of her era will be recalled in a similar fashion, despite their own body of work. There were those as talented, as prolific, but none as memorable for nothing less than a face that every camera loved.

One thinks of the iconic Marilyn Monroe, but her quality was one of pure sensuality that obscured her talent whereas Taylor brought not just heat, but a seriousness to her roles that demanded that you pay attention to Maggie in “A Cat On a Hot Tin Roof” and her role in "Raintree County."

I think my generation was fortunate to have shared its life with Elizabeth Taylor and with films of real substance such as “A Place in the Sun”, “Butterfield 8”, and “Who’s Afraid of Virginia Woolf?”

The characters she brought to life on the screen were not cartoons, but flesh and blood women. They will live on as we pay tribute to the real flesh and blood Elizabeth Taylor.

Back in "68" when I was just turned 18, I was in Florida at Hialeah with our family's string of horses. I was lucky enough to be up in the clubhouse with my old man and two of our owners at a table in the restaurant when Miss Taylor came in and sat at the table next to us. To this day, I'm not sure I have ever seen a more beautiful woman in person. I was lucky enough to get introduced to her and she was extremely gracious to a star struck 18 year old. One of the great moments in my life to be sure. The great thing about it was Mickey Rooney was at the track that day also, someone we saw a lot by the winner circle in those days.

Just between you and me, Liz was not in Night of the Iguana; at least not in the Huston movie or the Broadway premiere. Burton was in the movie, with Deborah Kerr and a totally unforgettable Ava Gardner.
I really grew to love Taylor for her AIDS efforts and her offer to act as a replacement for the Entebbe hostages.

@Retch: You're right! It was the equally gorgeous Ava Gardner. I was mad for her, too.

I will make the change to the text to reflect Taylor's role in Raintree County, another favorite film of mine.