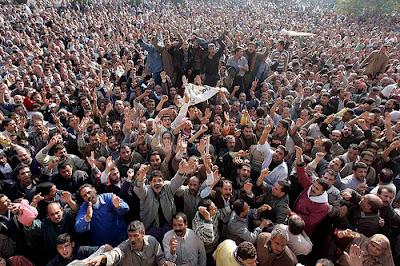 I’ve been thinking a lot about protests, riots and insurrections lately because they seem to be happening all over the Middle East and even in London.

In London, an estimated half million Brits turned out in the streets to protest government cuts in services, paying little heed to (a) how heavily they are taxed for them and (b) how they have all but bankrupted the nation. Though the protest was at times raucous thanks to local anarchists, it should be noted that the local constabulary did not shoot anyone.

Contrast that with the streets of Yemen, Syria and even little Bahrain where protests have generated a number of deaths as the main means of “crowd control.” This is also the way protests in Iran have been dealt with, along with imprisonment, torture, and all the other arts of despotism.

In Libya, an insurrection against four decades of despotic rule by Col, Gadhafi has dragged in the U.S., the U.N., NATO, and, briefly, the Arab League into the dispute. Given that Gadhafi had made it clear he intended to kill as many Libyans as necessary to retain his grip on the nation, there was no way this could be ignored.

By contrast, when a huge crowd gathered in Tahrir Square in Cairo the military did not roll out the tanks. After a few futile efforts to disperse the protesters, President Mubarak was eased out of the office he had held since 1981 and sent packing. All things considered it was a bloodless coup. The Egyptians just held an election to decide some changes to their constitution.

Other contrasts come to mind, most notably, the 1989 massacre that took place at night in Beijing’s Tiananmen Square when protesters, mostly young Chinese, gathered to seek more freedom, more justice, and more democracy. It did not happen. While outwardly prosperous, China remains the classic Communist state.

One of the biggest gatherings in the U.S. capitol involved an estimated million people who came out in March 2010 to protest against the passage of Obamacare. It was an extraordinary turnout and one that the mainstream media tried to depict as unruly and impolite, but it was nothing less than astonishing that so many people could gather in one place without any disruptive behavior. David Axelrod, an advisor to Obama at the time, gave the White House response. “They’re wrong.”

When Obamacare was passed, the Tea Party that had organized the protest just grew like Jack’s beanstalk and, by November 2010, lots of Democrats who had voted for it found themselves cast out of the House, along with some in the Senate. Americans know how to protest, how to organize, and how to vote out liberals.

The differences between American, British, and Middle Eastern protests are quite evident. In the former two, you show up, speeches are given, and everyone goes home. In the latter, you show up and the regime in charge is likely to shoot you.

In America it was the Boston massacre that literally kicked off the Revolution against England in general and the king in particular. British troops, feeling threatened, fired on a relatively small group of protesters and, as they say, the rest is history.

The history of what is occurring in the Middle East is playing out in its cities and, while the region is not famous for democratic reform, the U.S. intervention in Iraq to depose Saddam Hussein may well be seen in retrospect as the trigger for all the insurrections occurring throughout the region. Before the Marines and infantry showed up, you could only vote for Saddam.

The trigger incident in Tunisia occurred when a street merchant, harassed by the local police, set himself on fire, but it really doesn’t matter what the trigger is because it is the far larger resentment of the populations in the nations of the Middle East that has finally been ignited.

The other largely unreported factor is the deep schism between Shias and Sunnis. It expresses itself in different ways in different nations. Sunnis are the majority or control the affairs of most nations except Iran.

What will come of it? Is it good or bad for the United States and the West? Will the Muslim Brotherhood and/or al Qaeda take advantage and somehow secure power?

And no one knows the answer.

No good can possibly result from this intervention in an insurrection in Libya. The population of Libya has far outgrown its ability to feed itself, and only survives by selling crude oil to other nations and importing food. The high price for food was a major reason for this uprising itself.

Democracy can be imposed on a nation only with years of occupation (see Germany and Japan post-WWII)and close supervision for even more years.

Those missiles NATO is firing may not be directly killing all that many civilians, but what is to come because of this intervention will kill far more than otherwise. Where is the airlift to provide food to the survivors after the carnage to come? Famine is always accompanied by carnage.

It's pretty clear to me that unrest, similar to what we're seeing in the Middle East and Europe, is coming here soon. The question is, how will our authorities handle it?

Personally, I'm on the side of the authorities, because I enjoy law and order in my life. If violent protests erupt here, I strongly support the use of ANY means necessary to suppress them IMMEDIATELY. I lived through the riots of the sixties and I have no interest in seeing anything like that again in America.

In my opinion, nobody's life in America today is miserable enough at the moment to justify violent protests against the government or anyone else. We have a great system of government, and there are avenues to address any true injustices or inequities in our society. As long as our system of government remains intact, violence is completely unnecessary. Anyone who participates in or encourages violent protests, domestic terrorism, or anarchy is an enemy of the people and should be dealt with harshly.

Of course, this is a very fluid situation, and one wrong move on the part of our government could change things very quickly.

These are interesting times we're living in, aren't they?

The Global Revolution: Good or bad for the USA?

The jury is still out.

..."Of course, this is a very fluid situation, and one wrong move on the part of our government could change things very quickly.

These are interesting times we're living in, aren't they?"

All true Patriots agree with you - work within the law until such time as the law disappears, or becomes oppressive.

Then let slip the dogs of war, and woe to the evildoers!

American has had her share of scary moments (Kent State and civil rights demonstrations). I don't go to concerts and avoid large gatherings for this very reason. Mob mentalities can so easily get out of hand and what starts peaceable can turn violent in minutes, especially when anarchists are looking for such occasions to disturb the right of peaceable assembly.