A World in Disarray 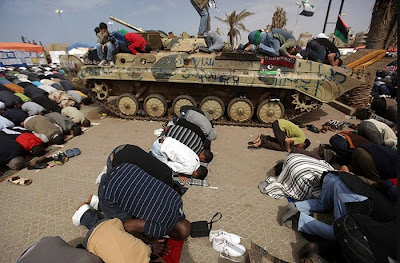 It almost makes one wistful for the Cold War when the world was neatly divided between the United States and its allies against what Ronald Reagan called “the evil empire”, the Soviet Union and its satellite nations.

Trying to bring about a League of Nations after World War One virtually killed President Woodrow Wilson who suffered a massive stroke, but liberals have always been entranced with the notion that an international organization would bring an end to war. Until, that is, World War Two.

As WWII was winding down, Franklin Delano Roosevelt set to creating the United Nations and, following his death, it came into being on June 26, 1945. The preamble to its charter says:

“We the people of the united nations determined

to save succeeding generations from the scourge of war, which twice in our lifetime has brought untold sorrow to mankind, and

to reaffirm faith in fundamental human rights, in the dignity and worth of the human person, in the equal rights of men and women and of nations large and small, and

to establish conditions under which justice and respect for the obligations arising from treaties and other sources of international law can be maintained, and

to promote social progress and better standards of life in larger freedom,”

The United Nations has devolved into a cesspool of evil and irrelevance. I cannot think of a single war, large or small, nor any genocides, it has managed to stop. There were a couple of military conflicts in which it was an active participant, mostly in the form of telling the United States to “go get’m!” and “don’t forget to wear our blue helmets.”

If there has been a force for freedom in the world, it has been the might and power of the United States of America.

Now our President says, “No U.S. troops will be in Libya.” This administration is desperately looking for some other nation to take the lead on Libya.

Let me be clear. I have not been a fan of spending our treasure and blood for the people of the Middle East. I am not a fan of war, but I know that war is the only way that most international conflicts get settled for good or ill.

The last President, George W. Bush, put together a coalition and invaded Iraq because, well, because he really did not like Saddam Hussein who, incidentally, had been invading his neighbors since the 1980s. His father had previously done the same to drive him out of Kuwait in the first Gulf War.

If there ever was a coalition regarding Libya, it was made of sugar candy because Germany and France had serious second thoughts after a week. No fly zones, it seems, cost a lot of money to maintain and most Western nations are broke, including our own.

The Arab League that called for a no-fly zone over Libya ran away even sooner. Arabs, who have shown an unparalleled talent for killing one another, lack the stomach for anything that involves mounting a real war to stop one of their own from killing the unfortunate citizens of his satrapy.

As it is, alphabetically from Bahrain to Syria to Yemen, despots throughout the Middle East are busy right now putting down their own internal insurrections. In the late 1990s Osama bin Laden gained a lot of attention by calling for the downfall of all the monarchies and despots throughout the region and the implementation of sharia law in anticipation of a global caliphate. The Saudis exiled him as they thought this was a really bad idea despite being the protectors of Islam’s two holy cities of Mecca and Medina.

At the same time we are witnessing a remnant of the Cold War, NATO, that does not seem to be functioning all that well, nor the European Union that was formed to be an enconomic bloc and clearly not one with any kind of a military component or sense of mission.

What the world needs is decisive leadership, but instead it has the Hamlet of the White House, Barack Hussein Obama, whose initial tour of the Middle East has, in retrospect, turned out to be one that caused its despots to conclude he was a wuss, a naif, a moron.

Who’s in charge of Operation Free Libya? No one knows!

The result is a world in disarray because the one nation every other nation thought it could count upon, for better or worse, is led by the Vacationer-in-Chief, a man who thinks that merely “saying the right thing” is the same as “doing the right thing.”

The situation in Libya will not likely turn out well, nor the growing opposition in Syria. No one knows what the outcome in Egypt will be, but everyone is pleased the crowds in downtown Cairo have gone home.

Meanwhile, Hamas is gearing up to cause trouble in Israel, waging its usual Made-in-Palestine terrorism based on the Yassir Arafat Guide to Always Saying No.

It is my profound hope the Israelis will strike back very hard, but it is also my profound belief that the UN Security Council will hastily meet to pass another resolution against Israel taking any measures of self defense.

This is how really big wars break out because no one at this point wants to fight the small ones.

Well Caruba, if you think the vacation in chief is doing a lous job, then run for president stupid and do a better one....

You can sit there in your high horse and bash the president, but I would almost guess that you are a Republican and that you voted for the President...

What I find you to be is a disgraceful melee mouthed centrist that has his head buried in the past. Either retire and shut up or give something more constructive to help heal this country.

I propose that you are a wuss, a naif and a moron.

And the smart money said it would last at least a week.

@Raymond. I don't think you will find many friends here. Least of all me. You can go away now.

You ask who's in charge?

US News: Americans — stunned out of silence by continuing lack of leadership — discover President Barack Obama has been missing for weeks.

Alan, I think anywhere they are in this position, they should have TARGET on their collective asses...

And your troll Raymond too...


The world is in disarray for many reasons, all coinciding.

In this fiasco of a "war", there is clearly no mission, and no leadership at the CIC level to be had.

Wow Alan, I admire your restraint. Comments like Raymond's would be enough to "grind my gears" ...

How ignorant does someone have to be to "guess" that you're a Republican and then accuse you of voting for Obama? Based on the comments I'm seeing on conservative blogs lately, it's pretty obvious that the Obama administration has hired a bunch of trolls, but I'm wondering where they found them. College students maybe?

Either Obama is too stupid to understand where this latest blunder leads the USA, or he is a highly intelligent communist prime mover of a dastardly Leftist conspiracy to overthrow the Republic.

In any case, Comrade Manchurian Candidate is very bad news for this country.

Playing soon at a country near you.

@raymond...
...after reading your comment few times over...
I still can not decide :
are you out of meds or you took too many....???
apply for a job at the White House , you will fit perfectly with the bipolar clown-in-chief!!!

I'm seeing on conservative blogs lately, it's pretty obvious that the Obama administration has hired a bunch of trolls, but I'm wondering where they found them. College students maybe?

Rush Limbaugh has commented on this as well and it appears to be true: During 2008 the Obots hired a small army of trolls to attack all major Patriot blogs and newspaper/magazine websites critical of "The One."

Rush cited one such Leftist troll (I can't remember the name) who planted the same article in a number of newspaper websites.

If anyone is interested, pick any major newspaper/magazine and note the majority of comments are made by Leftists.

Of course, Leftist newspapers like the NYT have editors who kick out most Patriot comments, but the sheer number of Left wing commentary makes me believe that Rush is right on target.

@Alan: You have arrived! The Obots have you in the cross hairs. They see you as a THREAT, you lucky blogger, you!