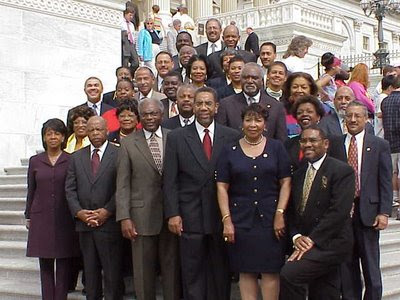 You know that Barack Obama is in trouble when even the Congressional Black Caucus begins to criticize him.

Maxine Waters (D-CA) recently told a gathering that the CBC is “frustrated” with regard to unemployment, a problem that has hit blacks harder than whites. The only thing holding the CBC back from being more vocal, said Waters, was its fear they will lose the support of the black community.

It says something about Congress and politics in America that the only race-based caucus is the Black Caucus.

Like many Americans, I watched the Civil Rights movement of the 1960s unfold with the feeling that, a century passed the Civil War, it was long overdue.

The movement had a leader of remarkable talent, Dr. Martin Luther King. Jr., plus others from the ministry and labor movement. It was a time of turmoil that ended with the assassinations of Dr. King, President John F. Kennedy, and of Bobby Kennedy.

Others died too in the struggle but they have become relegated to being minor historic players. When the dust settled President Lyndon B. Johnson signed the Civil Rights Act of 1964 and Voting Rights Act of 1965. The changes in American life since then have been extraordinary. Afro-Americans were assured their voting rights, equal housing, and other opportunities that had been routinely denied.

Whites accommodated themselves to the changes, having already accepted the 1954 Supreme Court decision, Brown v. Board of Education of Topeka, that "separate but equal" schools, a widespread practice in the southern and border States, were unconstitutional.

While many blacks have achieved middle class status and risen to levels of real achievement, the vast bulk has not. These comments acknowledge individual success stories, but address the larger black community.

As a general observation, blacks in America have chosen to ignore the gains in legally protected civil rights equality.

By most indices the black community has not changed. In U.S. cities they remain ghettoized, as much from choice, as external circumstances. Instead of moving forward, integrating and assimilating into the larger white population; blacks have emotionally remained apart, nurturing a sense of being victims, holding onto an animus for whites.

Social failures are so rampant among blacks that it is appalling to contemplate how many are born into single-parent families, often raised a mother or grandparents because the men are absent. They drop out of school. Unskilled and often illiterate, employment opportunities are limited. Blacks and crime have become synonymous to the point where they fill the nation’s prisons far in excess of whites and Hispanics. Drug use ravages black communities.

To say whites are disappointed is an understatement. It is a source of resentment that is rarely expressed aloud to avoid being deemed a racist or engaging in hate speech.

So how does one explain the phenomenon of the first black President?

Observers attribute it to a large turnout of younger voters, born well after the 1960s, to union members, many of whom were government workers, to 98% of the Afro-American community, and, of course, Democrats in general. Many white voters who wanted to affirm their belief that equality was an American value pulled the lever for Obama.

Barack Obama has exacerbated white disappointment and it is likely that many blacks, too, are experiencing buyer’s lament.

Among whites, there’s a feeling that scores are being settled with incidents like Obama’s condemnation of a white Boston police officer, the appointment of Eric Holder as the first black Attorney General, and of others like Van Jones as Obama's “Green Jobs Czar.” Jones is a self-identified Communist and a radical environmentalist who resigned and is now safe in the bosom of progressive organizations.

The latest affront to a predominantly white population is an executive order, issued on August 18, titled “Establishing a Coordinated Government-wide Initiative to Promote Diversity and Inclusion in the Federal Workplace.” In other words, whites need not apply.

When whites became aware of Obama’s preacher, Rev. Jeremiah Wright, saying “God damn America”, they had to actively ignore the fact that Obama had spent many years in his church, that Wright had married him and Michelle, and baptized their children. Theirs was no casual relationship, nor were others from any earlier point in his life such as the Communist Party member, Frank Marshall Davis, who advised young Barack that his white grandmother had a right to be scared of blacks because “She understands that black people have a reason to hate.”

It will be a long time before the majority white and Hispanic populations forget or forgive the legacy of Barack Obama.

Obama has wreaked economic havoc on America since taking office and this time people—black, white, Asian and Hispanic—have taken notice.

You did not mention the attraction of many blacks for Islam, supposedly a "religion of peace", which fed the black feelings of victimization, and suborned angry young black men like the Black Muslims, and Cassius Clay, who changed his name to Mohammed Ali to project his anger most effectively, and others who talked of rejecting their "slave names" in favor of Muslim aliases (not to mention the many who gave their children seemingly "white" names, but spelled differently to reject the "imperialistic, racist" heritage behind them (not that it was simply, or even mostly, consciously racist -- such word play was a feature of ancient languages, particularly Egyptian, when vowels were generally absent and the same "sacred" names were passed down, with modifications, in many languages, into modern times). You might also have mentioned organizations like Huffington Post, which have made their fortunes (literally), by catering to an essentially adolescent black racism and the "victim of race" psychology. Yet a third point is the coarsening of movies and other public entertainment that came in with the success of the civil rights movement and more black participation in them, from "black-sploitation" films and racially confrontational black comedians to angry "street" rap, and the effect of such coarsening upon the entire range of public discourse, which has become harshly and strictly divided right down the middle on every subject that is brought up -- which I have come to recognize as the "War of the Insane Left". Black anger is not responsible for this, but has significantly enabled it to usurp the public discussion ever more and more. These, of course, are only the negative effects, which do not do justice to the many positive ones, but they need to be faced and understood by anyone, white or black or other color, who feels racial resentment today.

@Harry: All good points, but the art of commentary is not to be inclusive all examples, but to focus on a central theme. I expect to return to this issue because of the phenomenon of black "flash mobs" and, of course, the increasing frustration with Obama.

I'm guessing the "race card" will increasingly be played as we get closer to the 2012 elections.

My central theme is that, at this time in history, dogma is widely resurgent: The past overshadowing and ruling the present. This understanding carries with it the answer, which the individual clinging to dogma (particularly, past sins) most needs to face and let go. It cannot be legislated for the masses, it must be individually realized as the road to personal freedom. The world was not made to be hell, nor hated; it was made with exhaustive and masterful care, to provide for both comfort and instruction.

The fact is blacks have had FORTY-SEVEN YEARS to begin the journey of catching up. The opportunities have been there and I am sick and tired of hearing that they are victims of racism! Everyone should be thinking of saving the country!