Marilyn Monroe and Me 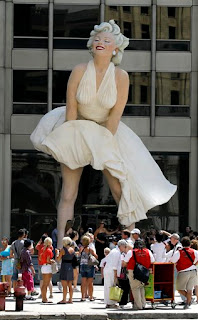 On August 5, 1962, Marilyn Monroe was found dead in her Los Angeles home, an empty bottle of sleeping pills by her bed. She had become what she has aspired to be, a movie star. I doubt she ever conceived that she would become a cultural icon, the embodiment of sensuality, glamour, and radiant beauty.

In July a 26-foot statue of MM was unveiled in Pioneer Court, Chicago; the work of sculptor Seward Johnson who called it “Forever Marilyn.” Good name because MM is etched into history as surely as President John F. Kennedy to whom she famously sang happy birthday.

In a recent Wall Street Journal column, Peggy Noonan, took note of the present “American unease” saying the reasons for it were in some ways “deeper and more pervasive” than concerns of the current financial crisis. “Some are cultural. Here are only two,” she wrote. “Pretty much everyone over 50 in America feels on some level like a refugee. That’s because they were born in one place—the old America—and live now in another.”

More than a 100 million Americans are over 50, a third of the nation’s population. Noonan said, “They hear a new culture out of the radio, the TV, the billboard, the movie, the talk show. It is so violent, so sexualized, so politicized, so rough. They miss the old America they were born into, 50 to 70 years ago.” That would have been the 1930s to the 1960s.

MM’s death led off the 1960s after a blazing film career from 1950 until her death. Lost amidst much of what has been written about her is the fact that she was a talented actress who could also sing as she demonstrated in now classic films like “Gentlemen Prefer Blonds” and in 1959 as I was graduating from the University of Miami she created the unforgettable Sugar Kane Kowalczyk in “Some Like It Hot”, starring with Jack Lemon and Tony Curtis.

The Draft ensured I would spend the next two years in the U.S. Army. I was discharged in April 1962. In a very real way, my teen years through high school and into my twenties in college were spent, like millions of young men, dreaming of Marilyn Monroe.

So there are lots of us old men--and women, too—who vividly remember the affect her beauty, her sensuality, and a frisson of innocence, had on us. We marvel that men like Joe DiMaggio and the playwright Arthur Miller would marry her, the former for a brief few months and the latter from 1956 to 1961. By all reports, her fame did not bring much happiness with it.

The rest of us, however, had our lives to live far from the glamour of Hollywood. In 1962 a gallon of gas cost 28 cents, a new car on the average cost just over $3,000. We had a young, handsome president who was married to a stunning woman, Jackie Kennedy, who was a star in her own right. The first Wal-Mart would open its doors in Bentonville, Arkansas. John Glenn would become the first American to orbit the Earth in a space capsule and a British singing group, the Beatles would release their first song, a single “Love Me Do.”

As Peggy Noonan said, it was a very different time, a very different culture, an America with a very different set of values and one locked in an ideological battle with the Soviet Union that, during the Cuban Missile Crisis, threatened a kind of Armageddon. The one thing Americans wanted more than anything was peace because memories of World War Two and the Korean War were still sharp in our minds.

We wanted to watch The Dick Van Dyke Show and The Beverly Hillbillies. Johnny Carson had taken over as the star of The Tonight Show. The Baby Boomers, born between 1946 and 1964 were coming of age.

As the 1960s came to a close there was a music concert called Woodstock in 1969 and Americans would become aware of “hippies” and a drug culture that appalled the parents of young people who were expected to go to college and get a job, not get high, “tune in and drop out.”

There are a hundred million of us who think that we were very fortunate to have been born into an era where vulgarity, profanity, and deviancy were not celebrated, not required by political correctness to be accepted as normal.

It was not a perfect time. The Civil Rights movement, a century after the end of the Civil War, finally recognized the American principle of equality with laws to back it up, ending segregation and the ugly Jim Crow era I had witnessed while living in the South.

I was busy being a journalist in the 1960s, a front row observer of the turbulence, a participant in the fear of the Soviet Union. I could not have found Vietnam, Iraq or Afghanistan on the map, but I knew where to find the Berlin Wall whose construction began in August 1961.

Now a huge statue in Chicago demonstrates she will never die. She has joined the immortals, a fragile foster child who grew up to fulfill her dream of becoming a movie star and became an American icon, dead now 49 years ago.

I am 52 and I truly feel like a foreigner in my own country. I am uneasy, and feel like a ship bobbing in a bad storm of change that I almost cannot believe, and a storm is brewing on the horizon.
Elton John said it best of MM, she was a candle in the wind, which is what this country is at this moment and will soon be blown out.
At least MM is immortal in the artist's tribute to her.

Denimflyz: The nation is in a financial crisis. It's been there before and will be there again. In ten years this is likely to be a memory if proper steps are taken in DC. The first step is to get rid of the present Congress and WH occupant and replace them.

I truly hope so, Mr. Caruba. I am so very saddened and very emotional to the disregard of this nation's principles that our founding fathers were planning.
Thank you for your beacon of light that you shine for all of us to hope for.
Regards

I'm guessing that if things keep going the way they are now, in about ten years, we'll be seeing huge statues of Obama popping up in every public square. A few years later, we'll be knocking them over ...

@Guy. In ten years or much less, Obama will be a pariah must like Jimmy Carter.

Looking back over my 70 plus years I now see a charitable effort that turned into a fatal mistake. It looked admirable at the time. That mistake was allowing our government to catch people that were falling in the “cracks.” The 'care free don't give a damn attitude' in the 60's and 70's, bred a lack of responsibility in many young people. The solution to this problem was to take care of them. This evolved into a uncontrollable entitlement state that we can not and will never get out of. Had these irresponsible persons been allowed to fall into the cracks they would have soon filled the cracks OR, they would have learned how to crawl out of the cracks.

Instead of helping, the government has made the cracks wider. We are not getting anyone out of the cracks. Instead we just toss food down the crack to feed them. We ruined the "good old days", don't you think?

Exactly. Ever see the Kevin Costner movie Field of Dreams? There was a line used throughout the movie ..."If you build it, they will come".

It still haunts me. What phrase could possibly be more applicable to our welfare and entitlement system as it exists today? We've built it alright, and they HAVE come. First one here and one there, then hundreds, then thousands, and now millions. There are so many similar sayings ... "water seeks it's own level", or "expenses always rise to meet your income", but "if you build it, they will come" seems the most appropriate.

It's old wisdom. It's just too bad there's nobody left in our government that can resist the temptation to keep on building and buying those votes.

Judge Bork wrote a book 30 plus years ago (the name of which I cannot remember) that outlined exactly what went wrong.

In most eras the young all wanted to be like the adults. The baby boomers were the only generation that wanted to be permanently young. Why? There are many reasons, including economic security like no generation had ever known before and therefore didn’t have the driving force economic need to generate a deep sense of responsibility. Having said that….according to Bork the primary reason behind all others is that the baby boomer population was the first generation in human history that was so large they couldn’t be properly absorbed by the adult population. So they created their own culture within the main culture.

And where did they look to for guidance? The leftists in the universities who had become seriously ensconces since the 1920’s sitting there waiting to contaminate and corrupt everything they touched, i.e., the Frankfurt School refugees, Margret Mead, Alfred Kinsey and all the others that were influenced by the socialists who had their moral foundation built in the French revolution. They have been active since that time just waiting….and lo and behold….the baby boomers appeared and we believed that they all had to go to college. Sheep led to the slaughter. Unfortunately they became so large they became the main culture.

I have thought about this a great deal over the years and I find that he was right. Because as each group reached their maturity they raised another large batch that couldn’t be properly absorbed. But that no longer mattered because the next generation of parents didn’t know what to do anyway.

There is one consoling thought. It appears that the polls are showing that the young are now coming to realize that someone is going to have to pay for the 100 plus trillion dollars obligations of the federal government….and they realize it is them. They are seeing things a little differently.

Going back to Bork’s observation; that culture they created for themselves was largely sans religion. About 18 years ago they published a study that showed that 80% of all the children under 18 years old had no religious training at all. Since they have no real moral foundation, or touchstone if you will, they are capable of being washed back and forth with every new philosophical flavor of the day.

Once traditional values are discarded they can be replaced by anything. And it is hard to go back. I am not pessimistic by nature, but I am not optimistic.