GE Stabs the US in the Back 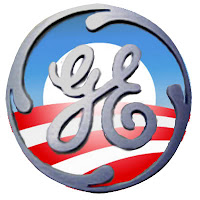 In 1876 Thomas Alva Edison opened a laboratory in Menlo Park, New Jersey for the purposes of exploring how to produce and distribute electricity. History records that he invented the incandescent electric light bulb there. By 1890, he had established the Edison General Electric Company, now know simply as GE.

In 2011, Jeffrey Immelt, the CEO of GE and the chairman of President Obama’s “Jobs Council” is eliminating jobs for American employees of GE at a furious pace. To add insult to injury, in 2010 GE paid no federal taxes at all despite worldwide profits of $14.2 billion. GE claimed a tax benefit of $2.3 billion.

From an America corporate icon to an American disgrace, GE epitomizes how federal policies, cronyism, and rent seeking is destroying America from within by avoiding taxes and shipping jobs overseas. Keep in mind, none of this is illegal. It is, however, unconscionable.

A recent article at TheEconomicCollapseblog.com took a look at the way GE is “moving jobs and economic infrastructure to China at a blistering pace.” For example, “GE makes more medical-imaging machines than anyone else in the world and now GE has announced that it is ‘moving the headquarters of its 115-year-old X-ray business to Beijing.”

The article notes that, “Under Immelt, GE has shipped tens of thousands of good jobs out of the United States.” Even the liberal learning Huffington Post reported that “As the administration struggles to prod businesses to create jobs at home, GE has been busy sending them abroad. Since Immelt took over in 2001, GE has shed 34,000 jobs in the U.S. according to its most recent annual filing with the Securities and Exchange Commission. But it has added 25,000 jobs overseas.”

The last GE factory in the U.S. that made light bulbs closed last September. This came on the heels of the federal government’s ban on the 100-watt incandescent light bulb and its push to require Americans to purchase the new CFL light bulbs as part of Obama’s green jobs initiative. The CFL bulbs have been universally denounced as providing less equivalent light, costing more, and using mercury as part of their manufacture.

When John Rice was appointed GE’s head of global operations, responsible for growth in markets that include China, India, the Middle East and Brazil, the Huffington Post revealed that GE planned to spend $500 million on research and development and new customer innovation centers in China, adding more than a thousand jobs there. “More than $1.5 billion is expected to be put toward joint ventures with Chinese state-owned enterprises in high-technology sectors.”

At the same time, Daily Finance.com revealed that GE “is arming China to compete with Boeing—and America.” Peter Cohen that “General Electric plans to sell its aircraft electronics to Chinese companies” noting that China just flight-tested a prototype stealth fighter” as it continues to build up its military. GE is selling technology “it developed for U.S. companies like Boeing to Boeing’s Chinese competitors.”

“America is being de-industrialized at lightning speed and very few of our politicians seem to care,” says TheEconomicCollapseblog while noting that in 1979 there were 19.5 million manufacturing jobs in the United States and today there are 11.6 million.

“The United States has lost a staggering 32% of all its manufacturing jobs since the year 2000.”

While President Obama berates the Congress for the lack of free trade agreements, he neglects to say that several such agreements with Latin American nations linger on his desk and none can be acted upon by Congress until he sends them for approval.

While Jeffrey Immelt flies around in his corporate jet and issues vacuous, hypocritical statements about jobs for Americans, he and his close friend in the White House are undermining the economy. Other U.S. corporations are following suit.

The U.S. corporate tax is the highest in the world, but you will not hear any talk of lowering this tax rate, only meaningless class warfare blather about taxing “millionaires and billionaires” more when, in truth, those taxes will fall heaviest on small business owners.

This is the deliberate destruction of the U.S. manufacturing sector.