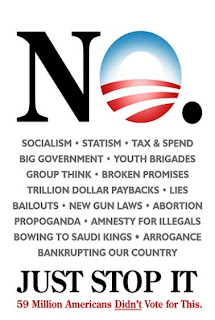 “In negotiation, ‘yes’ is the worst word. It just betrays a fear of failure and a fear of losing this deal, and it primes you to please the other side, to rush ahead, to compromise early and often to come to a deal, any deal. ‘No’ is the best word. It’s what you want to be prepared to say and to hear. ‘No’ will liberate you and protect you.”

The above is the opening paragraph of the introduction to a book by my friend, Jim Camp, “No, The Only Negotiating System You Need for Work and Home” and, for the forthcoming election, Americans or at least a majority of the voters have to say “no” to four more years of Barack Obama.

Camp, the creator of the Camp Negotiation Institute, has more than twenty years of experience and these days is coaching people from America to Brazil, China to Italy, Argentina to England, France to Russia, Sweden to Iraq; all of whom are seeking to become certified negotiators using his system.

Camp emphasizes the role of emotion in negotiations and what I am witnessing these days is a totally dispirited and depressed Republican and conservative voter community when, in fact, it should be energized by the dreadful prospect of a reelected Obama.

Regarding the conduct of negotiation Camp says, “’No’ will liberate you and protect you.”

Part of it the Grand Funk GOP that is occurring is unquestionably tied to the lengthy primary process, the fluctuations between the rising and falling fortunes of the candidates, and the horse race coverage by the mainstream media.

Camp emphasizes that “’No’ requires a solid, ironclad mission and purpose.” Can there be a single purpose greater than ridding the nation of the worst President in its history?

And isn’t every election a negotiation between the candidate and the voter?

Last week’s results of the polling by the Rasmussen organization found the following:

# 52% favor candidates who would raise taxes on the rich.

#46% say it’s possible for any American to find a job.

In short, Republicans and other voters are all over the place trying to figure out what is happening and what may happen in the future. They are bouncing back and forth between emotions that are either pessimistic or unrealistic.

“Before you make a decision,” says Camp, “your emotions rage all over the place. Then when you make a decision, you set about rationalizing it.” This is a perfect description of what I hear from people trying to make up their minds about who the Republican nominee should be to lead the party.

The fear in the hearts of too many Republicans is driving them to seek the perfect candidate, something that never was and never will be. All politicians seeking the nomination arrive with all manner of baggage from their years in office. Some are conservative and some are too conservative.

After what was arguably the best President of the modern era, Ronald Reagan, Republicans failed to support George H.W. Bush, allowing him to be defeated by Bill Clinton. In 1996, they supported a lackluster Bob Dole and Clinton won again. Then George W. Bush came along and Republicans had their man in the Oval Office for eight years.

By any rational standard, a completely unknown candidate should not have defeated John McCain, but Barack Obama offered not policies, but pure emotion based on “hope and change.” In the midst of a financial crisis, it worked.

The same fear that drove the 2008 campaign is now driving the 2012 campaign, but Obama has little to campaign upon. Rationally, we know he has mired the nation in debt that threatens an economic collapse.

We know his “stimulus” program and its promise of higher employment has been a total failure. We know that millions are still unemployed. Millions are on food stamps.

We know that Obamacare is now less popular than when it was passed against much vocal opposition; the first time that has ever happened to a piece of social legislation.

So why are Republicans in such disarray, in such a great funk over the process by which we pick nominees? EMOTION.

Republicans need to ask themselves who will say “no” to Obama and “no” to the nation-crushing changes he and his administration have imposed on us. Republicans, independents, and all conservatives have to get over their funk and get into the fight to save America.

John McCain was a really wishy-washy candidate, and had a long record of compromising with the Democrats. Terrible as a candidate, as no one had the faintest concept of what he would do if elected.

It seems that not only Republicans but lots of Democrats would elect an equivalent Ronald Reagan, so for the life of me, I can't fathom why there is no Republican candidate campaigning for the office of President emulating Ronald Reagan.

Perhaps no Republican candidate has the nerve or the capability to emulate Ronald Reagan.

@Larry: You are quite right. McCain was a terrible campaigner (and choice) because no one knew what he stood for.

The previous two comments are prime examples of rationalization of bad choices. Anyone with sense should have KNOWN, after the Rev. Wright episode, that Obama was unfit to be President--it was just as clear as day, to me, that he had no character. And McCain-Palin (don't forget her) was drawing ahead until the "Sepember Surprise" of suspiciously well-timed, sudden economic emergency. McCain did not lose the election; an incompetent electorate lost it.

I hope and pray that Obama will be removed from office by We The People this November.

However, I don't see any signs of concern on the part of any member of the Obama Regime.

I would think any rational individual would be worried about criminal charges and prison for their many crimes without the protection of a lackey U.S. Department of Justice.

This would include the president himself, who could be charged by a fair and objective Attorney General as a private citizen after he leaves office with numerous violations of 18 U.S.C. 2381 "Treason" that still carries the death sentence.

Does Obama and company know something we don't about a situation that could work out very badly for them in the following years without federal protection?

I wish there was, somewhere, a candidate that was not Against Obama, but instead FOR stuff: For smaller government, FOR protecting our rights, FOR removing the shackles, FOR getting us back into the number 1 slot in the world, FOR....something.

Alan we do and did know what McCain stands for--being a worthy war hero.

Otherwise he is just another RINO. buying votes.