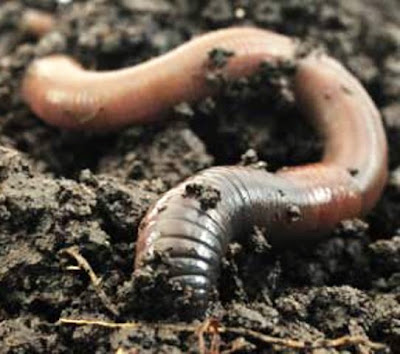 The utter desperation of the “Warmists”, the advocates of global warming—now called climate change—is evident in a recent “study” reported in the Daily Caller in which “an international team of researchers” concluded that “earthworms could be contributing to global warming.” Earthworms!

That's how stupid they think the public is.
It is useful to know the composition of the Earth’s atmosphere, the object of much fear-mongering by Greens and Warmists. According to Wikipedia, “Air is the name given to the atmosphere used in breathing and photosynthesis. Dry air contains roughly (by volume) 78.09% nitrogen, 20.95% oxygen, 0.93% argon, 0.039% carbon dioxide, and small amounts of other gases. Air also contains a variable amount of water vapor, on average around 1%. While air content and atmospheric pressure vary at different layers, air suitable for the survival of terrestrial plants and terrestrial animals is currently only known to be found in Earth's troposphere and artificial atmospheres."

The amount of carbon dioxide (CO2) in the atmosphere is extraordinarily low compared to its other elements. Edmund Contoski, the author of the award-winning “Makers and Takers”, a study of how wealth and progress is created or thwarted, has noted that “Not only is carbon dioxide’s total greenhouse effect puny, mankind’s contribution to it is minuscule. The overwhelming majority (97%) of carbon dioxide in the Earth’s atmosphere comes from nature, not from man.”

Not only are worms contributing to the CO2 in the atmosphere, but Contoski notes that “Volcanoes, swamps, rice paddies, fallen leaves, and even insects and bacteria alone emit ten times more carbon dioxide than all the factories and automobiles in the world. Natural wetlands emit more greenhouse gases than all human activities combined.” Contoski’s data is supported by the U.S. Department of Energy which also notes that 98% of all the carbon dioxide emissions are absorbed again by Nature.

According to a February 5 Wall Street Journal article, President Obama’s forthcoming State of the Union speech “will lay out a renewed effort to combat climate change that is expected to include using his authority to curb emissions from existing power plants…Mr. Obama is likely to signal he wants to move beyond proposed Environmental Protection Agency rules on emissions from new power plants and tackle existing coal-fired plants…”

There is not a scintilla of evidence that reducing carbon dioxide to avoid global warming has any basis in science, but ample evidence that Obama sees it as a way to reduce the nation’s capacity to generate the energy—electricity—it requires for economic growth. The effort to impose a carbon tax would suck more wealth out of the private sector while fueling the government’s insatiable desire for more funding.

The administration’s efforts to maintain this absurd, baseless notion were on full display when a report was released in January by the National Climate Assessment and Development Advisory Committee, claiming that “humans have so altered the composition of the atmosphere that the next glaciation (ice age) has now been delayed indefinitely.” The northeastern states were hit with a monster blizzard in February.

In late December, The Heartland Institute brought together fourteen conservative think tanks and advocacy groups to urge Congress to oppose carbon taxes. In a letter sent to all U.S. Senators and Representatives, they pointed out that a new tax on carbon content of fossil fuels would be a job killer and raise energy costs across the board, “hurting every industry and every consumer.” The letter noted that carbon is already taxed enough and that U.S. carbon emissions are already declining, but the bottom line is that reducing U.S. emissions will have no effect at all on the so-called climate change. Why? Emissions from China, India, and other developing nations are rising rapidly.

The irony of this is that more carbon dioxide in the Earth’s atmosphere would contribute to healthier forests and jungles, and most importantly, to increased crop yields that provide food for mankind and livestock, as well as all other creatures that consume vegetation as part of their diet. Carbon dioxide is Nature’s fertilizer for vegetation from a single blade of grass to a giant Sequoia tree.

There is no “consensus” among scientists regarding global warming and many, like those warning about earthworms, have misled Americans and others around the world with the greatest hoax of the modern era.

Since 2008, the U.S. has wasted nearly $70 billion on “climate change activities.” A report by the Congressional Research Service revealed that, from fiscal years 2008 through 2012, the federal government spent $68.4 billion to “combat climate change.” In addition, the Department of Defense spent $4 billion on the same futile, idiotic efforts when, in fact, humans play no role whatever in the changes occurring in the Earth’s climate. The Earth has actually been COOLING since around 1998 and that is entirely the result of less solar radiation. Those billions are an obscene waste of taxpayer funding.

Obama is lying. And he is using the Environmental Protection Agency to advance his lies as they produce more and more regulations whose sole purpose is to shut down existing coal-fired utilities and render impossible the construction of more utilities using coal in a nation that has centuries-worth of affordable coal reserves for the generation of more electricity to serve our energy needs. He is no friend of any other fossil fuel if the delay of the XL Keystone pipeline is any indication.

Energy, indeed, energy independence and the wealth and prosperity that would be generated is within our grasp. The only person standing in the way is Barack Hussein Obama.

Well said Alan. It's all just a mechanism to push his fear-mongering and controlling agenda. Obama is a firm believer of BIG government and that government knows best. He has his ruling style down to a T. He uses campaign sloganeering and campaign tactics to get his base all fired up and banging their empty vessels, making more useless noise than anything else. Then he waltzes in and says that something needs to be done. Never let a fake crisis go to waste. I'm so sick of him and his phony persona. Gone are the days when you had a real man with common sense as leader of a country! Today they're run by these wimps who lack the common sense gene, but rule by sound bites, political correctness anti-free speech rhetoric, and repeating lies. Please have a look at this BRILLIANT speech by Dr Ben Carson and then compare him to Obama. There is NO comparison. Obama isn't fit to lick his shoes. He didn't like the speech, but then the truth hurts!

He discussed his speech on Hannity. I'm really impressed with this man. Can you imagine him running for office? He'd cream Hilary Clinton.

You have told no more nor less than the absolute truth in this post, just as others have tried to do for years now.

OK, suppose for a minute that it really IS the earthworm causing all this *Globull Warming*...

Let's dig up ALL of the earthworms, go fishing, catch a lot of fish, fire up the cookers and ... wait.

Fire up the cookers? That would still, at least by association, still place the blame, indirectly, on the poor little earthworm..

Forget the earthworms, Fred...humans exhale CO2, along with all the other mammals on planet Earth.

I keep wondering when people will finally figure out what a bunch of bull global warming is.

Every so often I fire off a salvo at the Warmists.

The earthworms being responsible for global warming made me laugh but not as hard as the CNN anchor asking if the asteroid approaching the earth is a result of global warming. Maybe carbon dioxide emissions have some kind of magnetic attraction. Stay tuned for the next stupid reason as it obviously can't be that the earth is a dynamic, ever changing planet.

Love your work Alan. I have two main agw debunking points. First, there's nothing unusual about current temperatures or the rate of recent temp change. The hockey stick was debunked; without that fabrication, it's just another day on Planet Earth.

Secondly, and contrary to previous IPCC claims, their is no evidence of a causal correlation between CO2 & temperatures. In other words, there is no evidence that CO2 causes the climate to warm. This M4GW produced 3 minute video is extremely effective in making our case on CO2. And perhaps 95% of the public doesn't know the simple point it makes about CO2, so I wish everyone would see the video: http://www.youtube.com/watch?v=WK_WyvfcJyg&info=GGWarmingSwindle_CO2Lag